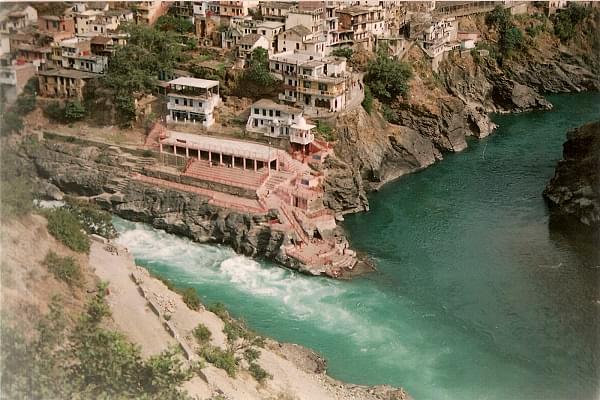 The confluence of Alaknanda and Bhagirathi rivers at Devprayag, Uttarakhand (Debabrata Ghosh/Wikimedia Commons)

A liquor bottling plant in Devprayag, where Alaknanda and Bhagirathi rivers meet to take the name Ganga, has started a political storm in Uttarakhand with local leaders demanding closing down of the unit, reports Times of India.

According to the report, records available with the excise department shows that a Delhi-based firm got the license to set up a bottling plant in Dudwa-Bhandli village of Tehri district in 2016.

The project, as per the locals, hit the headlines when the villagers staged a protest against the unit in 2016.

“Everything was stopped that year because of our protest. Now, we have learned that the trial run of the unit has started in Devprayag.” Samir Raturi, a local who led the protest, has been quoted in the report as saying.

Recently, the trial run of the unit started following which the photographs of the bottles went viral on the social media leading to a war of words.

Devprayag MLA Vinod Kandari, who hails from ruling BJP, blamed the erstwhile Congress government for granting the permission for the liquor bottling plant in 2016.

“I am looking into the matter to find out how the company managed to get the necessary clearance,” said the Devprayag MLA.

Former state chief minister and Congress leader Harish Rawat said that his government had given permission for a fruit beer and wine manufacturing unit and not whiskey.

“If my government had made a mistake, why is the present government not making any changes?” asked Rawat.

“Devprayag is a holy city and people won’t allow a whiskey factory there. The state government should respect their feelings." he added.