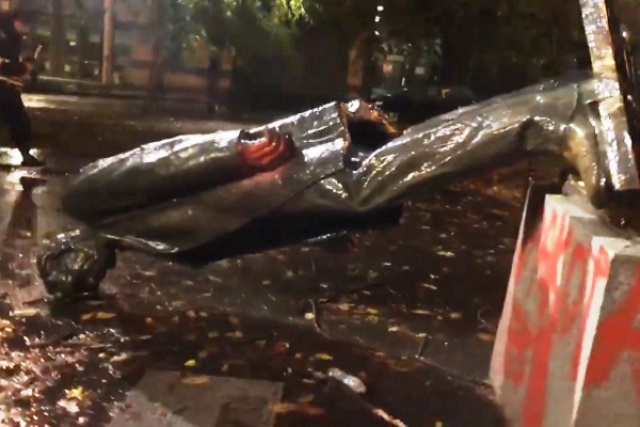 Violent protesters in the American city of Portland toppled the statue of former US presidents Abraham Lincoln and Theodore Roosevelt on what they called as a day of rage against Columbus day.

As per a Press Trust of India report, the violent protesters carried out this vandalism on Sunday night (11 October) while terming their actions as "Indigenous Peoples Day of Rage".

The violence came a day prior to Columbus Day which is a federal holiday in the US every year on 12 October to mark the explorer's landing in the Americas. Columbus is said to have carried out large-scale massacres of the native population on the continent after his arrival.

Lincoln who is credited with abolishing slavery in the US, had his statue toppled and spray painted with "Dakota 38". This is said to be in reference to Lincoln ordering the hanging of 38 Dakota men who were involved in a violent conflict with white settlers.

Roosevelt's statue on the other hand was toppled and vandalised as he was allegedly hostile to Native Americans.

The violent protesters also went on to vandalise several buildings including the Oregon Historical Society and small businesses.

As per a Fox News report, the protesters could also be heard shouting, "F*** all you colonisers. Every one of you that’s against Black Lives Matter can f*** the f*** off".

In response to the violence, the cops declared the incident a riot and warned of arrests.