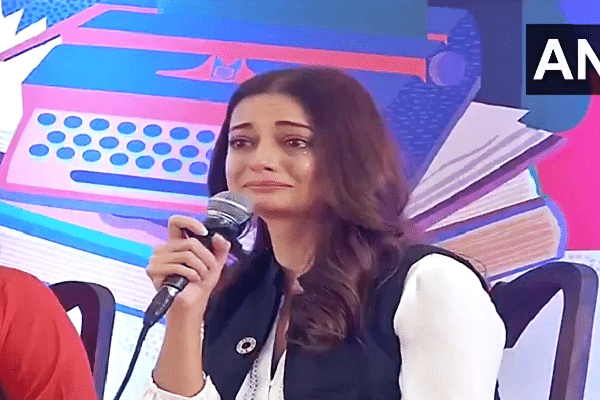 Actor Dia Mirza while speaking at a ‘climate emergency’ session at the Jaipur lit fest broke down in tears. Soon the video of the incident was picked up by media outlets and twitter users refused to show her any sympathy and proceeded to point out her hypocrisy.

#WATCH Actor Dia Mirza breaks down while speaking at the 'climate emergency' session during Jaipur Literature Festival; she says, "Don't hold back from being an empath". (27.1.20) pic.twitter.com/fyAgH3giL9

In the video shared by ANI, Mirza can be seen sobbing while telling the audience that, “don’t hold back from being empathetic, don’t be afraid of shedding your tears”. While making her statement she also ‘clarified’ that it is not a performance and that her tears were genuine.

Seeing her crying a crew member offered her some tissues and Mirza dramatically declined the same by saying that “she does not need paper”, in a possible bid to highlight her care and concern for the environment.

Twitter users though were not amused by Dia Mirza’s action and proceeded to call out her hypocrisy over the environment.

Why doesnât she switch from a fuel guzzling SUV to a Prius or a Camry Hybrid, if the state of the environment makes her breakdown in this manner? ð  https://t.co/KXIfgmXAxM pic.twitter.com/8tIdNYTkYo

Hey @deespeak what is the carbon footprint of vanity vans that are lined up at any film shoot site? Why do you need them, & so many of them? Do you know the amount of Deisel those generators use, the air & sound pollution they create? #justasking https://t.co/87JmKS9e9Q

Wow Kya â¹50 ka overacting.@deespeak doesn't have issues using trees for her furniture & flooring, an pertrol guzzling SUV or use â¹2.26 lakhs worth of water for her use. All this helps to save environment while a tissue paper for her glycerine induced crying is dangerous ð´ pic.twitter.com/60oFRzYarY

Itni acting films me kar leti behen. You opposed Mumbai Metro, one of the greenest projects, to make sure people drive Diesel SUVs to work. Climate emergency my foot https://t.co/WrpEeUM2CF

Many pointed out how Mirza has been using SUVs for her travel and possibly also uses wooden flooring in her house. It may be recalled that Mirza had also opposed Mumbai Metro’s Aarey shed construction which is a critical component of Line 3.

Media reports claimed that when Mirza while speaking after the event said that she was upset over former Basketball player Kobe Bryant’s death and her blood pressure was low which led her to be overwhelmed.