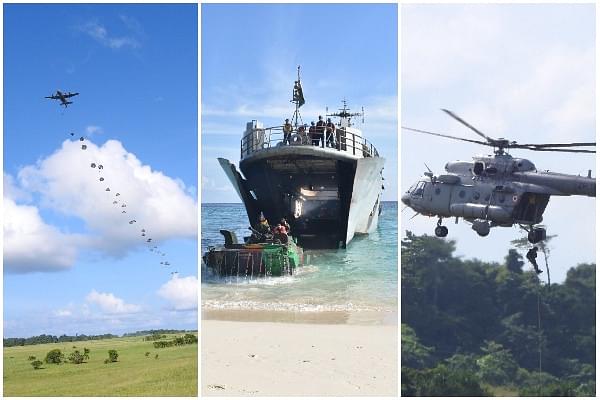 The exercise involved forces from the Andaman and Nicobar Command, elements from the Indian Army’s Parachute Brigade, Navy’s marine commandos (MARCOS) warships, and aircraft of the Indian Air Force.

Called Bull Strike, it was held at the remote island called Teressa, located in the southern part of Andaman and Nicobar island chain.

As part of this exercise, Para commandos were flown in from the mainland on a C-130J transport aircraft of the Indian Air Force.

Forces demonstrated amphibious landing capabilities as part of the exercise.

The exercise was held between 3 and 5 November.

This development comes at a time when India is holding the Malabar Naval Exercise with the US, Japan and Australia. The first phase of the Malabar Exercise concluded on 5 November in the Bay of Bengal. The second phase will begin later this month in the Arabian Sea. The naval exercise has brought the Quad countries together for a wargame for the first time in over a decade.

Both these exercises are significant as tensions between India and China are worsening over the ongoing standoff in eastern Ladakh.

Beijing’s ties with the US, Australia and Japan are also under strain due to its aggressive military posture in the South China Sea, trade issues, and efforts to block investigations into the origin of Covid-19.