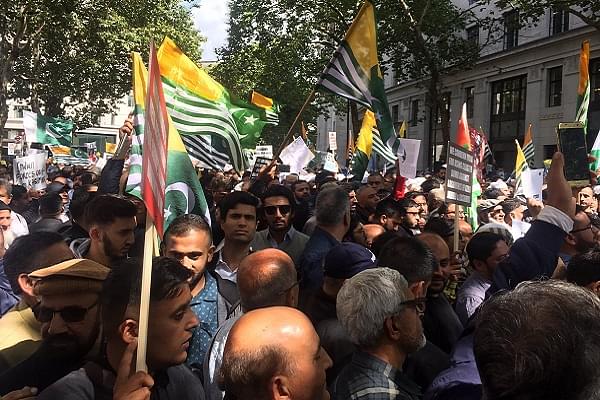 Pro-Pakistani protesters outside the Indian High Commission (Pic Via Twitter)

Indian journalist Poonam Joshi while reporting for ANI in London has been lauded on social media for her brave act of upholding the honour of the tricolour which was being defiled by pro-Khalisthan sympathisers.

Joshi was covering the anti-India protests by Pakistani diaspora and Khalistani supporters outside the Indian High Commission in London in response to the Government of India's decision to scrap Article 370 and bifurcate the erstwhile state of Jammu and Kashmir (J&K).

Asian News International (ANI) for which Joshi was covering the developments in London shared the video of the development on its official Twitter handle. In the video, Joshi can be seen snatching two torn parts of the Indian national flag from two Khalistani supporters who had seized the flag from Indians present there.

The demonstrators, backed and encouraged by the Government of Pakistan to amass and protest outside the Indian High Commission, had gathered on 15 August which marked the day of India's Independence. Pakistan had celebrated the occasion as a 'Black Day' in an attempt to internationalise the recent developments in the Indian territory of Jammu and Kashmir.