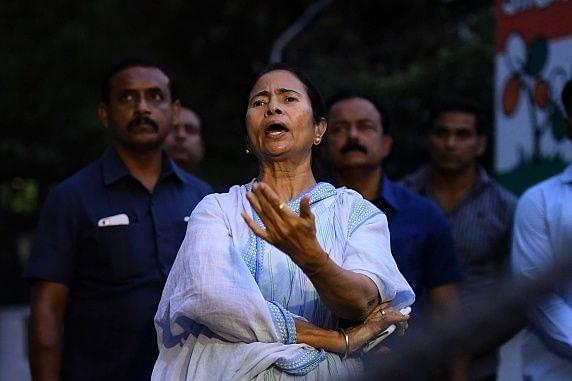 West Bengal Chief Minister Mamata Banerjee today (23 January) refused to give her speech at the 125th Birth Anniversary celebrations of Netaji Subhas Chandra Bose in Kolkata after chants of Jai Shri Ram were raised at the event.

The event was attended by Prime Minister Narendra Modi.

#WATCH | I think Govt's program should have dignity. This is not a political program....It doesn't suit you to insult someone after inviting them. As a protest, I won't speak anything: WB CM Mamata Banerjee after 'Jai Shree Ram' slogans were raised when she was invited to speak pic.twitter.com/pBvVrlrrbb

In a video shared by ANI, the audience members can be seen chanting Jai Shri Ram slogans ahead of Mamata's speech.

A displeased Mamata can then be overheard as saying that she will not be giving her speech.

Eventually after taking the stage she said, "Mereko lagta hai government program ka dignity hona cahiye. Ye political party ka program nahin hai...main to abhari hoon pradhan manti ji ka ki aap logon ne Kolkata mein program banaya lekin kisi ko amantrit karke usko beizzat karna ye aapko sobha nahin deta hai (I think a government program should have a dignity, this is not a program of a political party. I thank the Prime Minister for hosting the program in Kolkata but inviting someone (Mamata) and then insulting them does not behove them."

She added that as a protest she will not give a speech and left the stage.

Ahead of the Lok Sabha polls in 2019 an angry Mamata had confronted locals after they chanted Jai Shri Ram while her cavalcade was passing through the West Midnapore district.

Similarly in another incident Mamata purportedly threatened to flay the skins of locals and demanded that the authorities conduct a house to house search to identify locals who dared to chant Jai Shri Ram slogans and allegedly also attacked her car.