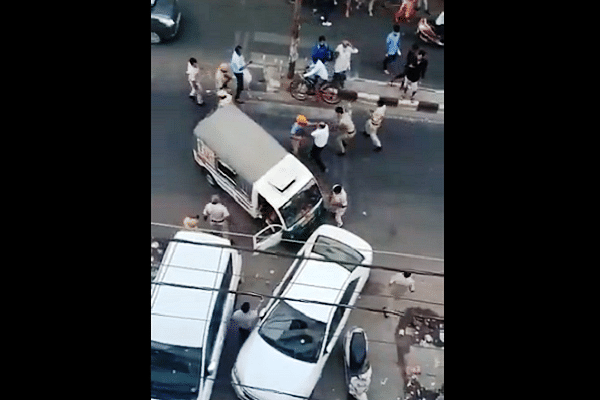 Video screengrab of fight between tempo driver and police

Pro-Khalistan slogans were reportedly raised inside a Delhi police station after an incident of a tempo driver attacking the city cops over an argument blew up yesterday (17 June).

In a video posted by rebel AAP leader Kapil Mishra, a crowd inside the police station can be seen chanting Khalistan Zindabaad slogans.

In a viral video cops could be seen wrestling with the tempo driver who apart from issuing threats, also tried to attack them using swords.

This was followed by the police beginning lathi charge on the temp driver and in response his son tried to hit them using their tempo, as reported by Zee News journalist Jitender Sharma.

A complaint was later lodged by the tempo driver, based on which the Delhi police filed a case against three of its constables and suspended them. A report was also sought by the Home Ministry in connection with the incident.

Despite this action, the supporters of the tempo drivers were not quelled and congregated in huge numbers in front of the Mukherjee Nagar police station.

This is the crowd at Mukherjee Nagar police station right now. They have blocked the entire road. Sheer hooliganism. Whats stopping @DelhiPolice from dispersing them? Why should the commuters suffer? pic.twitter.com/vgWAYRXWDR

Around the same time, some goons also targeted a Delhi Police ACP who was trying to quell the situation. The incident has been dubbed as a politically motivated one and Kapil Mishra has alleged that the Arvind Kejriwal led AAP government has a hand in it.