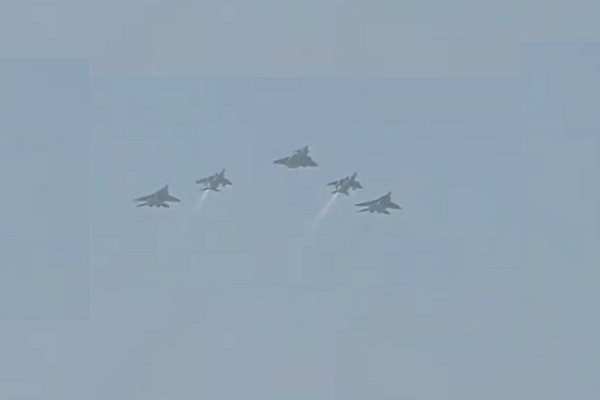 Rafale in the centre, flanked by two Jaguars and MiG-29s

The Indian Air Force (IAF) today (26 January) put up a spectacular flypast on the occasion of the 72nd Republic Day. This year's air show was special considering it was the first time IAF's Rafale fighter jets took part in the ceremony. The IAF also featured its vintage Dakota aircraft for the event.

Here is a full video of this year's IAF flypast.

In Delhi's clear blue skies, the event began with the Dakota aircraft flying past Rajpath flanked by two Mi-17 helicopters in a Rudra formation. This was followed by a flanked Chinook Helicopter in a Sudarshan formation.

Four Apache helicopters flew in a Rakshak formation at a speed of 180 kmph, just 100 metres above Rajpath.

The most awaited moment comes at 6.31 minutes when a Rafale flanked by two Jaguars and MiG-29s fly past in an Ekalavya formation.

Other aircraft which participated in the parade were Netra AEW&CS, C130J Globemaster and the old faithful Sukhoi Su-30 MKIs which also flew in a Trishul formation.