Watch: Street Dog Tears Down Congress Flag From Staircase Railing, Leaves It Lying On The Ground 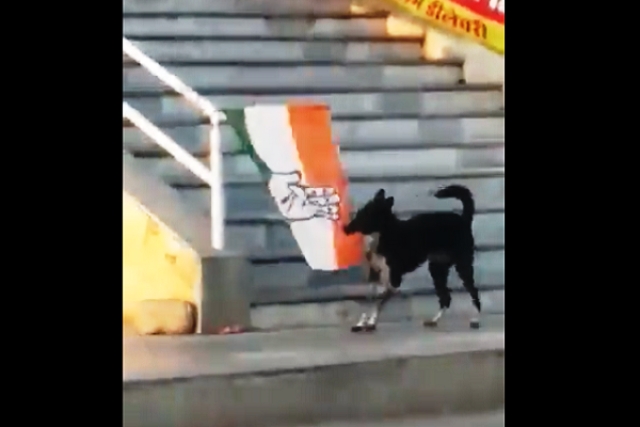 In another comic moment in the ongoing election season, a video has emerged of a street dog tearing down a Congress flag from a staircase railing.

In the video a dog can be seen trying hard to pull down the Congress flag and was persistent in his attempts despite initially being unsuccessful. The dog finally managed to achieve his goal and pulled the flag down.

Interestingly, the dog did not carry the flag with him as a trophy and left it lying down on the ground as he scurried away.

There have been other comic incidents this election. It was reported yesterday that the crowd at a RJD rally featuring Tejashwi Yadav declared that it would vote for Prime Minister Narendra Modi and only came there to see helicopter.

Similar comic scenes were witnessed at a Digvijaya Singh rally in Bhopal when a youth invited on to the stage by the Congress leader began praising Prime Minister Modi for carrying out surgical strikes to eliminate terrorists. The youth was later honoured by the BJP for his courage.