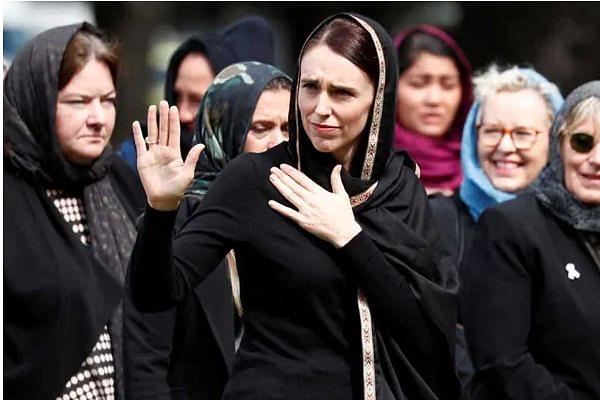 In a video going viral on social media, a young Muslim man is seen asking the prime minister of New Zealand Jacinda Ardern to embrace Islam. While praising her leadership skills, the man says “I hope one day you enter into Islam and I wish I will be with you in Jannah,” reports The News.

In the video, the prime minister, seen donning a hijab, is talking to a young Muslim man. “To be honest with you, what brought me here it’s you. I have been crying every day for the last three days. I have been making one Dua from Allah and I said I wish other leaders can look at your leadership skills. And my other one wish is I hope one day you enter into Islam and I wish I will be with you in Jannah,” said the man.

Upon which, Ardern replies Islam teaches humanity and “I think I have it.”

Now this Muslim guy praises NZ PM @jacindaardern then says he wish one day she will convert to Islam ... looks like her fancy dress backfired pic.twitter.com/zcdEpFYK2W

Post the deadly mosque attacks, not only the New Zealand prime minister addressed the Parliament with ‘Assalam o Alaikum’ but also, for the first time in history of New Zealand, invited a Muslim cleric to recite Quran in the Parliament. While addressing a massive gathering in Hagley Park, the leader recited a verse from Quran and wore a hijab while meeting the families of victims.

While some have praised Adern leadership as empathetic and compassionate, others termed it ‘ignorant’ of wider politics of ‘clash of civilisations’.

The exchange between Ardern and the young Muslim sparked speculations over Adern accepting Islam, but also raised concerns over whether attack has been exploited to further the agenda of political Islam.

Many Twitterati pointed out that Adern donning a hijab was insensitive to the struggles of millions of women in Islamic countries that are forced to cover up under the Islamic law.

Adern also came under criticism ‘going overboard’ in her actions and upholding a religion instead of universal human values. In a way, Adern’s actions made her seem co-opted into taking a side in the purported ‘civilisational war’ between Christianity and Islam, a narrative peddled by extremists on both the sides, instead of countering it.

Adern’s decision to use Quran and Islamic preacher to make a point was widely perceived as cowing down to emotional blackmail into making imbalanced, dramatic responses, which amount to upholding one religion and its religious teachings which, in several cases, have pushed back against democratic values, women’s rights and equality.

Adern was accused of shunning pragmatism, neutrality and a sense of proportionality and balance in glossing over several issues ranging from women rights to mistreatment of internal minorities and non-Muslims in the name of religion.

Adern’s actions are vulnerable to be misappropriated by Jihadists to establish ‘superiority of Islam’ over other faiths and the clear undertones, even visible in the statement of the young man in the video, that non-Muslims are subjected to divine punishment and only Muslims are afforded ‘Jannah’ or heaven, justifying inferiority of non-Muslims.

The actions of Adern could act as a fuel to furthering of ‘Dawah politics’ which runs counter to the multicultural and pluralistic ethos that the prime minister purportedly supports. Adern’s actions not only weaken the fight against radical Islam but also disregard Muslims fighting for internal reform.

‘Dawah politics’ and broadly proselytisation with political goals has come under criticism in recent times. Dawah politics sets the high standard of leaving own belief system and conversion to Islam as the only atonement for any offence committed against Muslims, rejecting modern laws and justice system as insufficient and ineffective.

Historically, Sufi saints carried out 'Dawah politics’ by mixing both non-violent and violent approaches, the goal of both remaining the same- conversion to Islam, former being the softer version of the latter.

A recent manifestation of ‘Dawah politics’ was found in propaganda of terror-groups. Islamic State, for instance, aimed to convert many non-Muslims around the world and then using them as fighters for the caliphate in the middle east. ‘Love Jihad’ is another example of ‘Dawah politics’. Such propaganda widely used statements of prominent non-Muslims including Gandhi, Leo Tolstoy, Annie Besant to establish superiority of Islam over all others, and by necessity, inferiority of other belief systems.