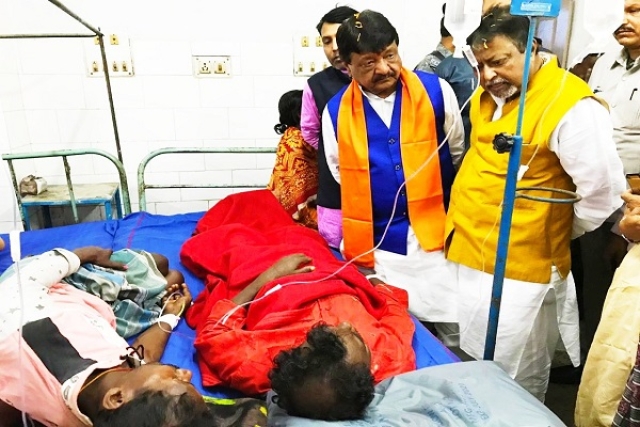 BJP leaders Kailash Vijayvargiya and Mukul Roy visiting the victims at the local hospital in Shantipur. (Pic via Twitter)

The toll from the hooch tragedy in West Bengal’s Nadia district has risen to 12 in a span of two days since the incident occurred. Both the ruling Trinamool Congress (TMC) and the Bharatiya Janata Party (BJP) sent their respective delegations to Shantipur town of Nadia, where the incident occurred, The Indian Express has reported.

BJP leaders accused the TMC of profiting off the rise in sales of illicit liquor in the state.

The BJP delegation, which was led by party national secretary Kailash Vijayvargiya and former TMC MP Mukul Roy, met with the victims and their families at the local hospital. Roy questioned the continuing sale of alcohol in West Bengal, stating that the BJP had banned liquor in states where it had come to power.

Vijayvargiya also attacked the ruling party for its profiting off both the legal and illegal liquor trade, stating, “It seems that liquor sale is a great source of money for TMC. Licensed shops pay revenue to the government, and unlicensed ones pay the party. Hence, they overlook and allow mushrooming of illicit liquor shops in the state,” he added.

Minister Partha Chatterjee, the TMC leader in charge of Nadia, also came to meet with the victims’ families. He laid the blame for the tragedy on the lack of awareness of people consuming spurious liquor.