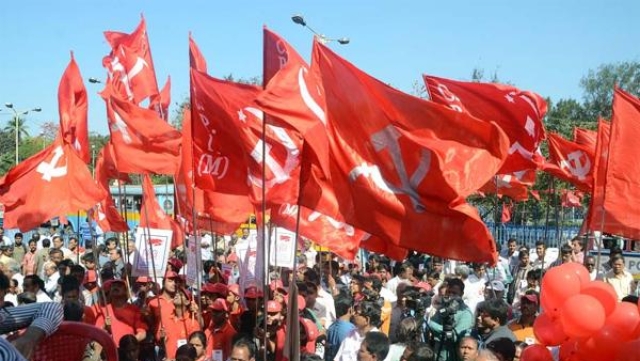 Senior Left leaders, including CPI-M state secretary Surjya Kanta Mishra and party politburo member Biman Bose, were arrested on Saturday (18 April) after they hit the roads to protest against the alleged PDS scam and demanding increasing the number of Covid-19 tests in West Bengal.

The Left leaders gathered at the base of B R Ambedkar's statue on central Kolkata's Mayo Road carrying posters and placards, railing against the state's Trinamool Congress government's 'mishandling' of the Covid-19 situation and demanding immediate stop to pilferage of rice in the Public Distribution System (PDS), corruption and black-marketeering.

Wearing masks and standing metres apart to maintain social distancing, the Left leaders also demanded the state government to disclose to the public the details about tests, number of deaths and those affected by the viral infection.

After some time, Left Front chairman Bose, Mishra, leader of the Left Front legislative party Sujon Chakraborty and CPI-M politburo member Mohammad Salim were arrested by the police and taken to the city police headquarters in Lalbazar.

"Amid the coronavirus crisis, people are not getting adequate supply of foodgrains. There is massive corruption. We had complained to the Chief Minister, but that didn't yield any result. So we were forced to hit the streets," said Chakraborty.

Mishra maintained that the Trinamool Congress government was trying to stifle the voice of the opposition, while Salim accused the Kolkata Police of violating the norms of social distancing by putting so many leaders together.

"We are here to protest against such things happening in the state," said Bose.

Leaders of other Left Front partners, including Communist Party of India, All India Forward Bloc and Revolutionary Socialist Party, besides, PDS, CPI-ML and other parties, participated in the protest.