‘Will Die But Never Convert’: Hindus In Pakistan Protest Against Forcible Conversions By Tablighi Jamaat 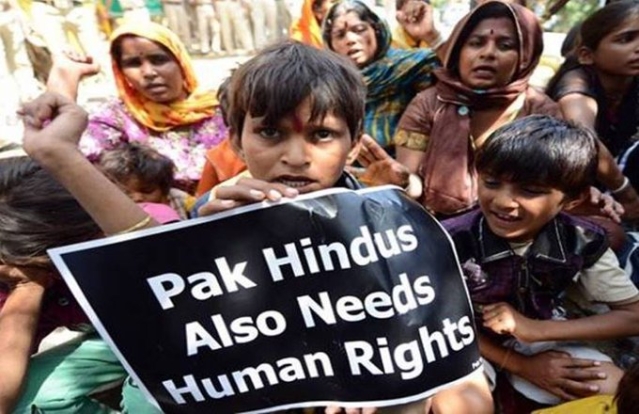 In yet another case of religious persecution of minorities in Pakistan, Hindus in Sindh province have alleged that the Islamic proselytising group, Tablighi Jamaat tortured them, demolished their houses and also abducted a Hindu boy for refusing to convert to Islam.

"We will prefer to die but will never ever convert to Islam," women, children holding hand-written posters against the Tablighi Jamaat were seen protesting in Nasur Pur, Matiar.

A woman who was speaking on behalf of the protesters said that their properties were grabbed and homes demolished and they were beaten, forced to leave and asked to convert if they wanted to get their houses back.

In another video, a woman lying on the ground, was wailing that her son has been abducted by the members of Tablighi Jamaat. The woman was begging the Jamaat to release her son.

The persecution of Hindus and Christians has been rampant in Sindh and Punjab provinces of Pakistan.

In an excruciating indictment of the Imran Khan government, the Human Rights Commission of Pakistan (HRCP) recently said that over the years "there have been horrific, religiously motivated attacks on the minority communities and any efforts towards eradicating the violence, prejudices, and inequalities have been virtually imperceptible".

Both the Hindu and Christian communities in Sindh and Punjab continued to face forced conversions last year.

Recounting the incidents, the commission said in Punjab and Sindh, girls as young as 14 were abducted, forcibly converted and coerced into marriage.

In recent years, the commission said, people from minority religions have been facing persecution, and the Hindu community is feeling insecure and vulnerable as they face antagonism and mob attacks over allegations of blasphemy.

The Hindu community has a history of being targeted, the commission said.

"They are also forced to learn Islamic studies in school. There is also some concern that there are not enough Christian burial grounds and Hindu cremation grounds."

Regretting that even as the court had directed in 2014 to set up a task force to develop a strategy for religious tolerance, reform of the curricula, action against hate speech in the media, a special police force to protect places of worship, and prompt registration of cases of desecration, the HRCP said nothing has happened yet.