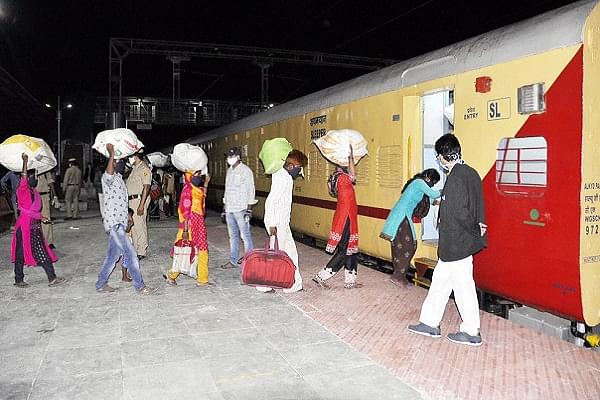 Within five days of launching Shramik Special trains on 1 May, the Indian Railways has successfully run 76 such trains which have carried over 70,000 migrant workers to their home States who had otherwise been stranded due to the nationwide lockdown, reports Hindustan Times.

Of all 76 trains, 35 originated from the State of Gujarat, followed by 13 which originated from Kerala. Meanwhile, among the receiving States, Bihar has received 13 trains with 11 in transit and another six in the pipeline. On the other hand, Uttar Pradesh (UP) has so far received 10 trains while five more are in transit and another 12 in the pipeline.

The Shramik Special trains boast of 24 coaches, each with a seating capacity of 72 passengers. However, in the light of COVID-19 pandemic, the Indian Railways has suspended the usage of the middle berth to ensure social distancing norms. Thus, the effective capacity per coach has been reduced to 54 seats.

The Railways' expense for this operation is being borne by the Centre and the States in an 85:15 ratio. Also, the Railways is believed to be spending around Rs 80 lakh per service. However, it has not shared any official detail on how much it has spent in running of these trains so far.