Writing’s On The ‘Wall’: In Kerala Today, CPM Will Pit Women Against Each Other In Onslaught Against Temple Traditions 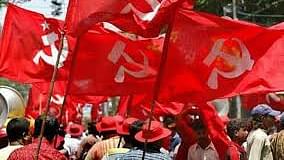 Communists during a rally in Kerala

The wall reportedly is a counter to the protests by devotees of Sabarimala after the ruling communist government decided to implement the Supreme Court verdict, allowing all women to pray at the shrine, with unusual zeal.

The women, according to reports, would form a wall from Kasargod in northern Kerala to the southernmost district of Thiruvananthapuram.

The communist government has reportedly thrown its weight over the wall by deploying its cadre and state machinery as the Sabarimala Karma Samiti-organised Ayyappa Jyoti was a grant success in terms of participation and support. Today’s controversial wall is being hosted by the ruling CPI(M), along with other political organisations, including the CPI, social groups such as Sree Narayana Dharma Paripalana Yogam (SNDP) and Kerala Pulayar Maha Sabha (KPMS).

Moreover, over one lakh Jacobite Christians will also reportedly take part in the women-wall.

Party meetings were reportedly held at various levels-from ward level to district and constituency level to ensure the success of the wall. State Health minister KK Shylaja herself will lead the chain at Kasargod and CPI(M) leader Brinda Karat will lead the wall at the tail end of the string at Thiruvananthapuram.

The participants are expected to gather at the designated centres, where a rehearsal will be held at 3 pm. After that, the wall will be formed between 4 and 4.15 pm.

"Finding a solution to the issues faced by women is seen as part of the class struggle," News 18 quoted Chief Minister Pinarayi Vijayan as saying. Ensuring gender equality is part of class struggle, he added. The wall also bats for secularism and to oppose the move to turn the state into a 'lunatic asylum’.

SNDP Yogam General Secretary Vellappally Natesan lauded the initiative and said that Sabarimala issue has led to the ‘women wall’. In an interview to Mathrubhumi, he said,“ Some people are only trying to protect the authority in temples in the name of customs,”

However, Opposition leader in the Assembly and senior Congress leader Ramesh Chennithala has described the initiative as a 'wall of contradiction'. Muslim League MLA MK Muneer had termed it as a 'communal' wall and slammed the government for inviting participation only from 'progressive Hindu organisations'.

The Nair Service Society (NSS) has also refused to join the wall alleging that it is aimed at creating communal polarisation and caste divide. However, CPM secretary Kodiyeri Balakrishnan and Chief Minister Pinarayi Vijayan has asked NSS secretary G Sukumaran Nair to rethink their stance.

Socio-political activist and writer Sarah Joseph and many others have refused to participate in the wall alleging the “hypocrisy” of the ruling party, which was soft on its MLA PK Sasi who was accused of sexually harassing a young female party worker. The MLA was, however, suspended after a CPM inquiry into the incident, which categorised it as ‘not so severe’.