Yediyurappa Leads From The Front, Camps In Flood Affected Belgavi To Oversee Relief And Rescue Efforts 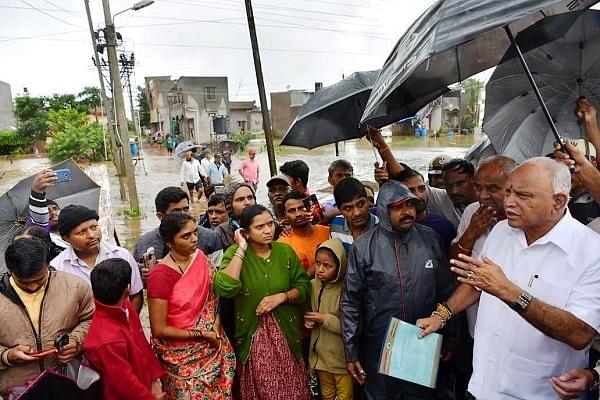 He is accompanied by chief secretary T M Vijayabhaskar and other senior officials.

The Northern Karnataka districts of Belgavi, Bagalkot, Vijayapura, Raichur and Kalaburagi have been hit by floods and incessant rains, with the met department predicting moderate to heavy rainfall in the region for the next five days.

Besides monitoring the flood situation, the Chief Minister has been conducting meetings with officials and elected representatives to discuss on relief measures.

Yediyurappa met people affected by the floods and assured support in bringing their lives back on track. He also surveyed the highly damaged National Highway 4 in Belgavi district.

Visited places affected by floods in Belagavi. Met with the people in these regions to address their concerns and have directed officials to do the needful immediately. #KarnatakaFloods pic.twitter.com/QgrRhwvfB8

As informed by Yediyurappa, the state government is monitoring the situation 24x7 and is spearheading efforts to evacuate those affected to safer areas and arranging food, water supply and clothing for them.