Education: One Manifesto Above All 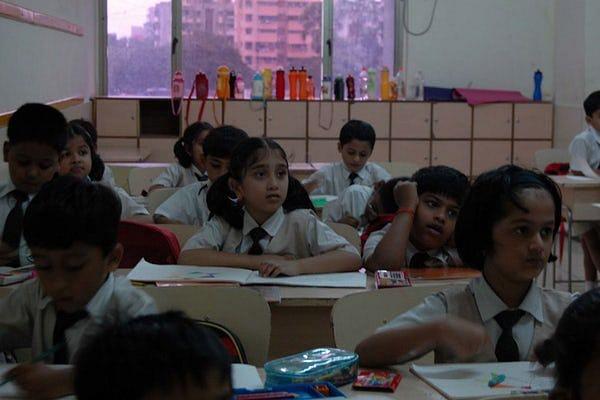 Students sitting in a classroom

Amongst all the major economies of the world, India has by far the most favourable demographics. India will realistically add around 250 million working age people (25-65 age) by the early 2040s, a 40 per cent increase from 65 crore to around 90 crore. During the same period, the Chinese population in the same age group will fall from above 80 crore people to around 70 crore.

Yes, the coming cohorts are likely to be almost fully literate irrespective of gender but the quality of their education inculcated remains sub-standard. Whether one looks at the Annual Status of Education Report (ASER) surveys for rural metrics (which have finally stopped falling, at least, as of 2018) or does anecdotal checks with recruiters in our big cities, the situation remains worrisome.

While learning remains as poor as ever, the state’s regressive regulations make the situation worse. Laws like the Right to Education (RTE) act have dealt a huge blow to autonomy of educational institutions and are forcing closures of budget private schools which mainly cater to students from lower middle class and poor backgrounds. Worse, these stifling regulations only apply to non-minority schools (mostly Hindu-run schools) thus distorting the market.

Distribution of scholarships based on faith of the student prepares a fertile ground for communal tension in the society.

All this needs to change.

Here are some major action points for the next government to radically transform the way the education sector functions in the country.

a. Give through Aadhaar - Rs. 750 per child per month for every student of 6 to 18 years of age, of a poor background (two-third of children in this age group), to attend a budget private school. The limit per nuclear family would be two for boys, and no limit on number of girls that will be supported from one family. This amount will not go to those who attend a government-run school.

Budget impact: At around 30 crore students in this age group, multiplied by two-thirds of that who qualify on basis of income and that in turn multiplied with its half, assuming that half of them will choose private school, the total cost of this project comes to Rs 7,500 crore per month, i.e. Rs 90,000 crore per year.

b. Give through Aadhaar - Rs. 250 per child per month for every student 6 to 18 years age, of a poor background (2/3 of children in this age group), for tuitions / coaching / supplemental educational needs (including edtech spending - see point 4 below). The limit per nuclear family would be two for boys, and no limit on number of girls that will be supported from one family. This amount will be handed to each qualifying student irrespective of whether the student attends private or government school.

Budget impact: at around 300 million students in this age group multiplied by two-thirds of that figure who qualify income wise, the total cost of this measure would be Rs 4,500 rupees per month, i.e. Rs 54,000 crore per year.

d. Political impact: positive. For many poor and lower middle class families, most of whom are now aspirational, a good education for their sons and daughters is one of their biggest worries. This will be even more popular than Ayushman Bharat possibly. Teacher unions in government schools are likely to protest, but that would be overshadowed by the popularity of the proposal.

2. Taking sectarianism out of scholarships

Set up a committee which (a) reviews all scholarships given to minorities - budget, eligibility, etc (b) gives report within six months with recommendation to making all these scholarships available to ALL students - irrespective of religion (c) recommends a foundational principle for scholarship policy: should disbursal be done on pure merit OR on pro-rata basis (meaning if scholarship budget is Rs 100, then Rs 80 go to Hindus, Rs 15 for Muslims, and so on. This is the mode of disbursal followed currently by Minority Affairs Ministry for giving scholarships to SIX national minorities - Muslims receive 80 per cent; Christians, close to 10 per cent; and then Sikhs and so on). Announce this revised new policy in 2020 general budget.

3. Right To Education: The right way

a. Though RTE needs to be repealed and replaced in toto, doing the following will go a long way in reforming the act. Amend section 12 to give reasonable amount as reimbursement to schools instead of forcing them to fill their 25 per cent capacity at highly subsidised fees. This will remove second biggest problem with RTE - cross subsidy. Currently, are schools forced to raise fees for 75 per cent students to recover for the loss they accrue on educating 25 per cent RTE quota students.

b. Amend section 13 to allow for screening. Let schools select students in both the 25 per cent and 75 per cent categories. Currently, the government selects students and sends to schools. This has created an NGO industry which is in a constant fight with schools. As a result, this has increased litigation. Let parents and schools choose the school and students respectively, not the government.

c. Every school needs to obtain a certificate of recognition (section 18, 19 of RTE) to start operations. This is a big impediment to ease of opening and running a school. It’s a sort of license and has huge potential for corruption. The government can, by a simple notification, relax the norms for getting the certificate (as section 20 mandates). For this, two things should be done on priority. First, increase the validity period of such a certificate from present 3 years to 10 years to reduce harassment. Second, do away with strict student-teacher ratio so that budget private schools can flourish.

d. CBSE drops the requirement of ‘No Objection Certificate’ from the state government for granting the board’s affiliation to a school. This is a huge avenue of corruption. Also, it prevents “edupreneurs” from entering the market. If this is removed, it will lead to more schools joining in the CBSE system and increased competition will bring down fees. The NOC requirement should either be done away with or its validity increased from present 5 years to 10 years. If these aren’t possible, then at least fix a period of say 3 months for the state governments to process NOC requests failing which NOC will be deemed to be given automatically.

e. The MHRD and the NITI Aayog launch ‘Ease of opening and running budget private schools’ national rankings to cater to millions of lower middle income class students. This will inject a spirit to competitive federalism in states which will have incentives to cut red-tape.

f. Distinction between minority-non minority educational institutions must be scrapped. All secular schools should be governed by one set of regulations and all religious schools (irrespective of the sect) should be governed by separate set of laws. Article 30 should be amended and the words “All minorities, whether based on religion or language” should be replaced with “All sections of citizens”.

g. Communal bodies such as National Commission For Minority Education Institutions (NCMEI) must be scrapped (can be done by simple majority in Parliament). If non-minority institutions are under the regulatory framework of the state governments, minority ones can’t be given special privilege to be under the purview of a national body which only has members from minority community.

i. Set up a high-level committee to come up with National Curriculum Framework (NCF) 2019. The last one came in 2005 as soon as UPA came to power. Out of spite and to install the left’s agenda, it replaced a very good NCF prepared under MHRD of Murli Manohar Joshi in 2000. NCF 2019 committee should have prominent and sound voices rooted in Bharatiya Sanskriti such as SL Bhyrappa, Narendra Kohli, Shatavadhani R. Ganesh (for literature and culture), Lokesh Chandra, Makhan Lal, Meenakshi Jain, Dilip Chakraborty (for History), Bibek Debroy, Sanjeev Sanyal (for economics), Manjul Bhargava (For Mathematics and Sanskrit), etc. A Committee to review history textbooks can be a separate one or be a sub-part of the NCF 2019 committee.

a. Building on the January 2019 permission to all HEIs (Higher Educational Institutions) by the UGC (University Grants Commission) to offer courses/programmes in online mode (where laboratory etc. requirements are not there), the same should also be done by school boards for higher secondary education (or “junior college” equivalent). Secondary education can be considered, but primary education should be exempt from this mode.

b. The above should not just apply to entire academic years, but also to modules or semester-equivalent school courses so that students can create their own unique mix of online-offline paths for their education completion.