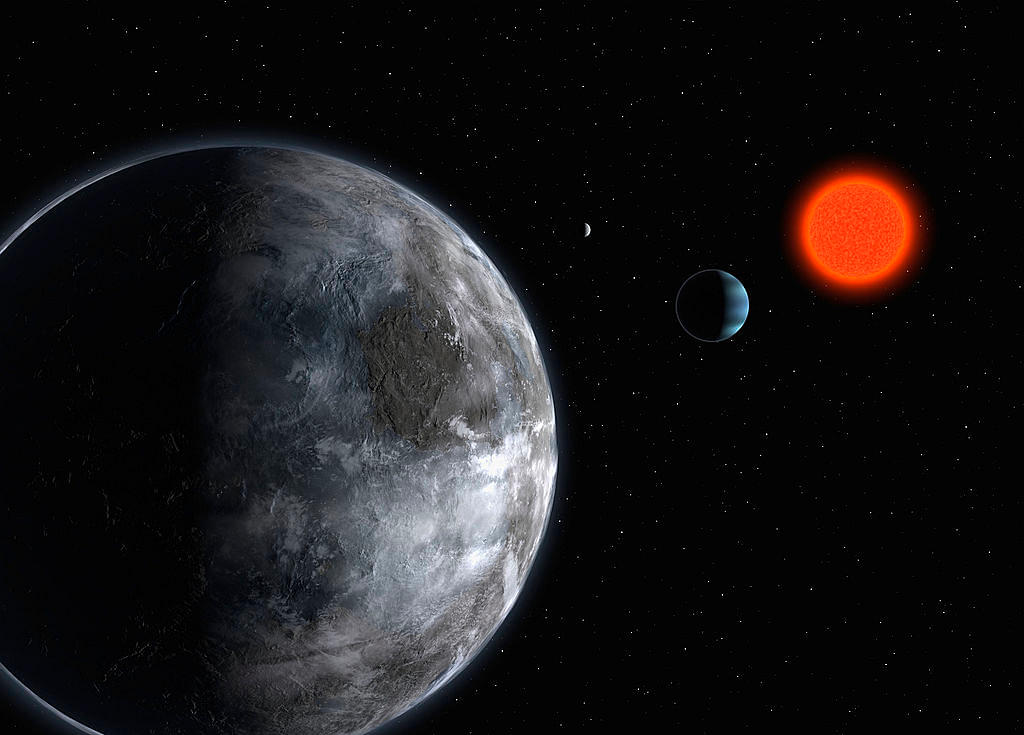 An artist’s impression of the planetary system around the red dwarf, Gliese 581. Photo credit: ESO via Getty Images

If not on Earth, where else can human beings be?

Not as a traveller in a spacecraft or as a one-off tourist on the moon but as an immigrant, or a coloniser who sets up a permanent residency for multiple generations.

Given our current knowledge of physics and the state of propulsion technology, we really do not have the ability to travel to other stars in a reasonable amount of time, so our search for that second home for humanity is restricted to our own solar system. Where do we start?

There are two divergent points of view on where to locate such an extraterrestrial colony. Some believe that the colony should be located on a natural body like a planet, satellite or an asteroid, while others think that the best bet would be an artificial structure in orbit around a planet or in space. There are pros and cons for both. What is common to both approaches is the realisation that any environment outside the terrestrial biosphere that we currently inhabit is inhospitable if not actually hostile to all kinds of known life forms, including humans. The availability of a magnetosphere that shields us from cosmic radiation, of liquid water that is fundamental to our biology and of an atmosphere that has oxygen for our metabolism is essential, but unfortunately there is no place where all of this is readily available. So wherever we go, we would need to create this environment artificially.

Question is, where is it that this can be done with the least effort or at lowest cost.

The obvious place to think of is our moon because it is closest and we have already been there. But because it is so deficient both in water – with just traces of this precious liquid found by India’s Chandrayaan – as well as in gaseous oxygen and nitrogen, that it is not thought to be worth exploring. The only real value of the moon is as a source of minerals that can be mined and, more importantly, lifted off the surface relatively inexpensively because of the low gravity compared to Earth.

Mars, on the other hand, is a more Earth-like location. The physical terrain is very similar to our rocky arid deserts and while no liquid water is present today, there are huge ice caps in the polar region that, if melted, can provide all the water that we would ever need.

What is nice is that because the axis of rotation of Mars is tilted just like that of Earth, there are regular seasons, and while the winter temperature at the poles can be as low as -1,50OC, summer temperatures near the equator reach a comfortable 35OC.

The atmosphere is thin and the air pressure on the surface is about 0.6 per cent of what we have on Earth. But since most of this is carbon dioxide, there is a good possibility of using terrestrial plants to use sunlight and gradually convert carbon dioxide into precious oxygen that both plants and animals can use. Melting the polar ice caps to release water and gradually converting carbon dioxide into oxygen could be the first steps towards terraforming Mars and creating an Earth-like environment. After water and oxygen, the third challenge is the lack of a global magnetic field that would shield residents from cosmic rays, but the existence of umbrella-shaped auroras in some areas show the promise of local magnetic shields that could prove useful. But in areas bereft of such protection, thick walls or living underground would solve the problem.

While Mars may look like a good place to pitch our extraterrestrial camp, there are three other possible locations.

Titan, the largest satellite of Saturn, is a world where liquid hydrocarbons play the role that water plays on Earth. Titan has a dense atmosphere consisting largely of nitrogen, and it rains hydrocarbons like liquid methane every now and then. This leads to the formation of liquid methane lakes near the poles. The climate, along with the winds and the rain, creates surface features very similar to Earth with dunes, lakes, rivers, deltas and oceans that are dominated by seasonal weather patterns.

Titan is cold, very cold and far away from the sun, and so solar energy may not be a feasible solution. But it has water ice, and if the energy potential of the vast quantity of methane – and that is a big IF – can be unlocked with the help of oxygen extracted from water, then we have one of largest sources of hydrocarbon energy in the solar system. Again, even if we do not go to live there, Titan could be a source of energy, like the Middle East on Earth, that could be extracted and transported to other worlds inexpensively, because of Titan’s low gravity.

Next stop is Enceladus, a small, rocky world covered with water ice that orbits Saturn. But what is interesting in Enceladus is that even though surface temperatures are far below freezing, there exists beneath the thick ice shell vast oceans of liquid water that are kept warm by the tidal effects of Saturn’s immense gravity. In fact, so hot is the interior that plumes of salty water are regularly seen to erupt out of the surface in a manner similar to geothermal geysers on Earth. These salt water plumes also contain nitrogen, as ammonia, and organic molecules like methane, propane, acetylene and formaldehyde that prove the existence of hydrothermal activity and potential energy resources. In fact, the presence of these products also signal the possible existence of life forms similar to those found on Earth.

Our third and final stop on this current tour of possible locations for our second home is Europa, another ice and rocky satellite that orbits Jupiter. Europa too has a vast, subterranean ocean of liquid water warmed by the immense tidal effects of Jupiter’s gravity and it ejects plumes of water spray similar to the kind found on Enceladus.

There are two other features that make Europa possibly one of the most habitable locations both for terrestrial as well as non-terrestrial life forms. First, it has a magnetic field caused either by a nickel-iron core or a subterranean pool of salty liquid water that forms a subsurface conductive layer. Second, it has an atmosphere, which, though thin and tenuous, consists primarily of oxygen! This is of immense value for any human colony that may be located there. Because of all these factors, Europa has emerged as one of the most likely locations in our solar system for potential habitability.

Mars, Titan, Enceladus and Europa all seem to have the basic ingredients necessary to support human life, but given the lack of an Earth-like environment, man will have to create an independent structural unit with controlled, ecological life support systems that are isolated from the local environment. If this be the case, why build this structure on a planet or a satellite? Why not build the structure in space itself? This is the logic behind the design of space habitats that could either be in orbit around planets or around Lagrangian points – gravity wells where the gravitational attraction of two large astronomical bodies tend to, kind of, cancel each other out. These could be huge structures, many kilometres long and shaped like a cylinder or a torus that spin on an axis to generate the sensation of gravity. Powered by an abundance of solar energy and sustained by recycling materials on a mini-planetary scale, these structures could be sustained by advanced agricultural techniques based on greenhouse and hydroponic technology. Many of these technologies already exist, but the biggest challenge would be to source the construction materials. Carrying them from Earth would be impossibly expensive, but a more feasible approach would be to mine them from other, low-gravity locations. That is where robots will come in very handy because they can be made to mine and transport materials from inhospitable worlds.

Now that we have some options for our second home, some of us will ask the question – why on Earth, pun intended, would we want to go there? One reason of course could be the deterioration of the political and ecological environment that may make Earth uninhabitable. There is also the finite, non-zero probability of some incredible accident that may wipe out life on Earth. But perhaps the biggest compulsion would be man’s curiosity. Two hundred thousand years ago, primitive man walked out of Africa and spread out all over the world. Later on, people from south India crossed the Bay of Bengal to colonise south-east Asia and Europeans spilled out into America and then Australia. Each such excursion led to vast increase in exploitable resources. However, in each case, in each society, there would have been sceptics who would have wondered: Why? But then, there must have been others who said “Why not?” and it is the latter who would eventually prevail!

So would be the case for man in space. Why not?