Landing On Lunar Surface: How Chandrayaan-2 Will Travel From Earth To Moon 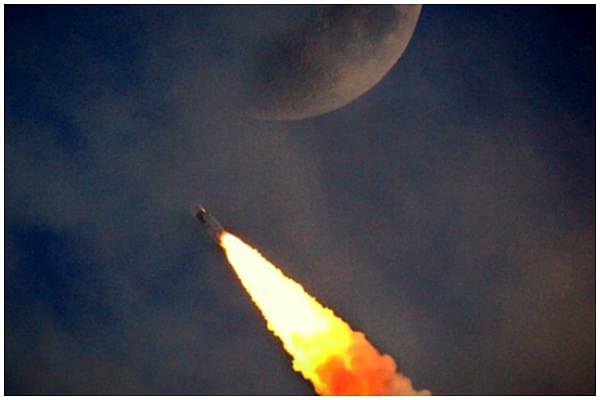 In 2008, India made its first big leap into space as Chandrayaan-1, our first lunar mission, set out for the moon. A small cube about five feet on each side, it orbited the moon and beamed back evidence of water on the lunar surface and tens of metres below it, and, in the process, gave life to new geological curiosities. But 10 months into its two-year-long mission, it fell silent, bringing the exploration to an abrupt end.

Ten years later, India is returning to the moon to find answers to these curiosities, and many more, which continue to elude explanation. And this time, on the lunar surface.

Carrying a lander and a rover, Chandrayaan-2 will trace the same path to the moon and go beyond, where no human or machine has ever soft-landed — the moon’s apparently water-rich but freezing-cold south pole. Captivating, indeed.

Chandrayaan-2’s journey to the moon will begin atop the Indian Space Research Organisation’s (ISRO’s) heaviest rocket, Geosynchronous Satellite Launch Vehicle (GSLV) Mark III. The lander, named Vikram, and the rover, christened Pragyan, will be interfaced mechanically with the orbiter and accommodated inside this launch vehicle. The six-wheel rover will be housed inside the lander.

When the launch is set into motion, the first to ignite will be the two solid strap-on boosters on both sides of the rocket. Breathing out orange plume, the boosters give the rocket the thrust required for lift-off and guide it through its brief but majestic vertical ascent. A few seconds later, the liquid-fuelled core, or the second stage, powered by a pair of Vikas engines, will fire, and the strap-on boosters, having served their purpose, will be dumped.

This will be followed by the jettisoning of the protective payload fairing, or the covering over the payload — in this case, the orbiter and the lander. This covering is designed to protect the payload during the rocket’s ascent through the Earth’s atmosphere and maintain the rocket’s aerodynamic structure. When the rocket is in space, the fairing is no longer needed.

After this, the liquid core stage will shut down and get detached. Then, the cryogenic upper stage, powered by CE-20, India's largest cryogenic engine, will ignite, driving the module to a highly elliptical Earth Parking Orbit.

At this stage, the onboard propulsion system will raise the module’s orbit around the Earth through a number of burn. How does this work, you may ask?

While orbiting the Earth in an elliptical orbit, the module will be at its highest speed when it passes through the point in that orbit closest to the planet. This point is called the perigee. Exactly opposite to this point in the orbit is the apogee, where the module will be the furthest from the Earth and at its slowest speed. The speed varies across different points in the orbit due to the variation in the Earth’s gravitational pull.

The closer the module is to the Earth, the more the gravitational pull, and the greater the speed. Every time the module reaches the perigee, or the point of highest speed, the onboard engine fires, increasing its speed even more, pushing it into a higher, more elongated orbit as a result. With every burn of the onboard propulsion system, the module will keep spiralling outwards in increasingly elongated ellipses.

Eventually, the module’s speed will reach escape velocity, required to escape Earth’s gravity, and its orbit elongated enough for it to set a course for moon. Some accounts say that after six burns of the engine, the module will be in a highly elliptical orbit which will pass close to the moon’s orbit around the Earth. To push the much smaller Chandrayaan-1 into such an orbit, called the Lunar Transfer Trajectory (LTT), ISRO had to fire its engine five times.

The Chandrayaan-2 module’s entry into the LTT will be timed in a way that it reaches close to the moon’s orbit when the moon is there itself. At this point, the module will get captured into the moon orbit through a precise manoeuvre by the onboard propulsion system. This manoeuvre, also called lunar orbit insertion, will reduce the module’s velocity significantly, enabling the moon’s gravitational field to pull it into a lunar orbit. Nearly one-and-a-half months after it set out for the moon, Chandrayaan-2 will be orbiting it.

This is largely how ISRO’s Mangalyaan, or the Mars Orbiter Mission, and Israel-based SpaceIL’s Beresheet lander, travelled from their orbits to the Mars and the moon, respectively. But NASA’s Apollo-11, a manned mission launched in 1969, was guided to the Lunar Transfer Trajectory by a single six-minute-long burn of the Saturn rocket’s third stage, like a sling shot. The spacecraft took just over three days to land on the lunar surface. How it did so is a story for another day.

So, the module has escaped Earth’s gravity and entered the lunar orbit.

Now comes the trickiest part of the mission. After the module arrives in the 100 km orbit, the lander will separate from the orbiter, which will continue to revolve around the moon. A separate entity now, the lander will de-boost with the firing of its four breaking engines. This manoeuvre will bring it to a periapsis of around 18 kilometres. When the lander reaches this point, that is at the height of 18 km, the onboard position detection camera and hazard avoidance sensor study the landing site for accuracy. Using the data obtained, the lander will autonomously determine the trajectory it will have to take to get to its pre-determined landing site, and steer itself to a location 100 metres above the site.

Here, the lander will hover and allow the hazard avoidance sensor to determine the safest landing point. Then, it will be guided to this point and at the height of 2 metres above this location, the thrust will be cut off and the lander will go into a free fall to the impact point with the landing legs attached to it absorbing the impact shock.

Once on the ground, the lander will deploy the six-wheel rover to the lunar surface using a ramp. The rover will operate for 14-15 earth days, or one lunar day, on the surface of the moon in a semi-autonomous manner with ISRO exercising partial control from Earth.

Like NASA’s Mars rovers Spirit and Opportunity, the Pragyan (which translates to 'wisdom' in Sanskrit) rover sports six independently motorised wheels, but unlike the former two, its corner wheels do not steer. The orbiter, meanwhile, will continue to revolve around the moon and do so for a year.