Mirror, Mirror… On The Wall 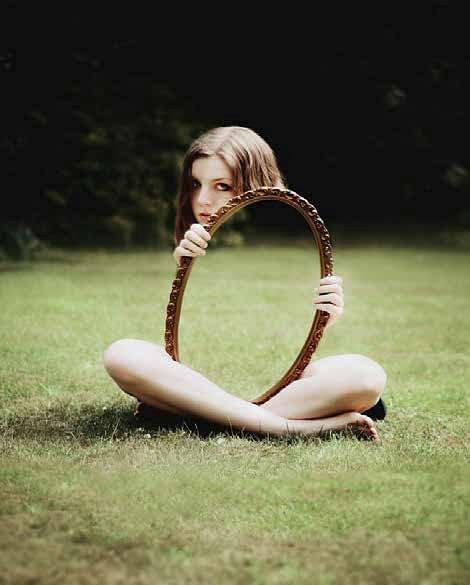 Mirrors, from time immemorial, have always been thought to have magical powers. But they can also heal people, and have helped Narendra Modi become Prime Minister.

The inspiration for this month’s column came to me all of a sudden as I languorously combed my luxuriously long locks. After all, it was smiling back at me in all its shining glory—the missing piece—the lost half: the dazzlingly dark doppelgänger.

I sat there smiling too—not at “it”, mind you! I was smiling at the irony. Here I was—scoffing in scorn at selfies, in my last month’s column—when my “own” inspiration came from my “very own” reflection. (Note: I am now wondering what you are wondering too: Am I unwittingly vain? Or…Am I blindly narcissistic?)

Whatever be the answer to that one (we’ll leave that assessment to an expert), there’s one thing we know for sure: the mirror is by far the greatest marvel of mankind.

From the Evil Queen’s Magic Mirror in Snow White to Lewis Carroll’s Alice Through the Looking Glass, the magical mirror cajoles…beguiles…seduces. And so it has been since for ever and ever. In fact, it was man’s obsession with his own reflection that paved the way for this great invention. And maybe that’s why, the Latin root word mirari (“look at”) lies at the heart of the two English words associated with vanity—“mirror” and “admire.” The mirror, therefore, is no ordinary reflective surface.

Whether it was Narcissus who was ensnared by his own reflection in the pool or Medusa who was beheaded by the hero Perseus using a mirrored shield, the mirror at once soothes and spooks. Its duality is truly daunting—for it represents both reality and illusion. It reveals, yet also conceals. Hence, for centuries, its simplicity and complexity have fascinated both scientists and occultists.

Of course, before we let rationality and science take over, let us explore the myriad myths about the mirror. The most predominant of these myths is the alternate universe theory. An ancient Chinese legend, for example, speaks of the Fauna of Mirrors—an alternate universe that exists behind these seductive shiny silver surfaces. Even though the gateway—once upon a time!—was free for all, the Yellow Emperor cast a powerful spell and bound the mirror beings inside the mirror, where they lie waiting for their resurrection.

Another common myth concerns mirrors and our souls. The Romans, for instance, believed that it took seven years for life to completely renew itself. This is why, breaking a mirror is supposed to result in seven years of bad luck. And probably why Dracula does not cast a reflection—after all, he has no soul! Another popular legend concerns mirrors and Bloody Mary (not the drink, the ghost). As urban legends go, if you stand in front of a mirror and chant her name three times, she is duty-bound to make an appearance (then again, it is better to go and chant “Bloody Mary” at a bar…for drinking them will be infinitely better than inviting them).

It doesn’t end here. Mirror myths permeate the very fabric of our lives.

In the Jewish tradition, it is customary to cover all the mirrors as the family is “sitting shiva,” which is the seven-day mourning period post the burial, for it is believed that an uncovered mirror can trap the soul of the dead. Hence, covering them all gives the spirit a safe passage. Similarly, in Christian tradition, the mirrors are either covered or turned around to face the wall during the vigil for the deceased. And, it wasn’t only the dead who were made to stay away from mirrors. Infants too, who were yet to celebrate their first birthdays, were not allowed to see their reflections in the mirror. (Of course, this practice lost its appeal as mirrors became more common than the common cold.)

But not all rituals associated with mirrors are negative; they have their place in festivities too. The mirror, for example, is an important aspect during an Islamic wedding, where the bride and groom gaze at each other’s reflections and declare romantic affirmations. Similarly, in Christian folklore, a bride is advised to take a last look at herself in the mirror before the ceremony for good luck (of course, coming back for a second look is a strict no-no).

Similarly, with the help of vastu and feng shui, you can use mirrors to bring positivity to your home and life. In fact, mirrors have been called the aspirin of feng shui because of their ability to “cure” negative spaces. In fact, in Shaman tradition, toli (a round ritual mirror) is worn as part of the Shaman’s attire. These ritual mirrors are used for healing and blessing, and for divination and protection.

In fact, when used for the purposes of divination, the correct term is “catoptromancy” (divination using mirrors). As legend goes, the Greek mathematician Pythagoras (yes, the same guy who gave us the Pythagoras theorem) also used a magic mirror to practice catoptromancy during full moons.

Then again, he wasn’t the only mathematician intrigued by mirrors. Diocles, another Greek mathematician in classical antiquity, studied parabolic mirrors, which were chronicled in his book, On Burning Mirrors. But it was the great mathematician and scientist Archimedes who took an ordinary mirror and turned it into a weapon of destruction. During the Roman siege of Syracuse in 212 BC, Archimedes used his burning mirrors—mirrors used to reflect rays of sunlight in a targeted manner—to burn down the entire enemy fleet.

Since then, mankind has woken up to the great potential that’s veiled inside the plain ordinary mirror. Several experiments have revealed that mirrors can surreptitiously affect human behaviour, often in positive ways. Hence, if a dance studio, for example, employs mirrors, the dancers are more likely to work harder and thereby perform better (and the same applies to other workspaces too).

The usefulness of mirrors is not only limited to dance studios or workspaces. They have found great use in medicine too. For example, mirror therapy is being extensively used to successfully treat phantom limb pain and post-stroke paralysis. (In fact, the mirror box was invented by the noted neuroscientist Vilayanur S. Ramachandran, and the celebrated author of Phantoms in the Brain (1999) and The Tell-Tale Brain (2010)).

Furthermore, the mirror also serves doctors during diagnosis. For example, physicians (especially ENT specialists) have been using the head mirror as a diagnostic tool for a long time now.

As a matter of fact, in 2012, an MIT PhD student, Ming-Zher Poh, conceptualized and built a medical mirror. These medical mirrors were made to measure one’s vital stats with the help of light. What Poh has successfully demonstrated is that mirrors are not simply useful for brushing or shaving. It can literally save your life! Of course, some mirrors save lives outside a doctor’s clinic too, such as in the case of rear-view mirrors which effectively reduce blind spots so we can enjoy a safe driving experience.

And then of course, you have the age-old smoke-and mirror parlour trick that still makes the audience gasp and gawk in surprise…Now, that’s truly a mirror’s magic! In fact, a curious application of mirrors can be seen in something called the Pepper’s Ghost, an illusion technique (used at theatres, concerts, magic shows, etc), which gets its name from the British scientist, John Henry Pepper, who popularised the illusion technique during his scientific demonstrations. An image is bounced off a mirror hidden to the side of the stage to create a 3D image that appears to be a real object on the stage.

Then again, Pepper’s Ghost is not just a simple parlour trick. It can also help you win elections and be Prime Minister! How, you ask? Read along!

Unbeknownst to many, it was the curious case of Pepper’s Ghost that helped our tech-savvy Prime Minister, Narendra Modi, deliver a 55-minute speech at 55 locations at the same time during the 2012 Gujarat assembly poll campaign. He later duplicated the feat in the 2014 Lok Sabha campaign when he simultaneously appeared “live” at 88 locations (across India) to deliver his poll speech. Modi’s speech was filmed in a studio, and beamed by satellite to bounce off a reflecting surface (invisible to the audence) on rally stages all over India, and he seemed to be right there, on stage, in flesh!

That’s how he did it, ladies and gentlemen—mirrors! (Mirror, mirror…on the wall, who’s the smartest of them all?)