Pleasure Of The Hookah 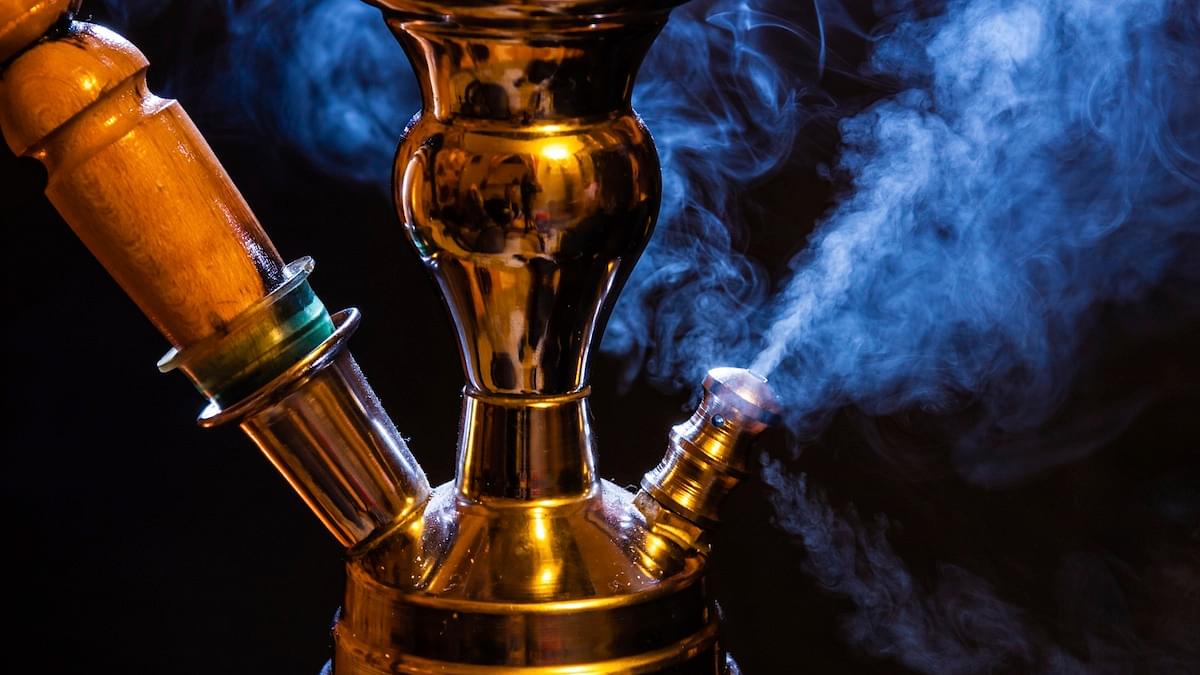 Salve, amici! Just what is it that people find so seductive about the ghalyoon? I am referring, of course, to the pneumatic water pipe, a device that is used for smoking in large parts of South Asia, the Asian-stans, and the Middle East, and is known by several names—narguileh, shisha, arguileh, okka, lulava, chillim, dakka, gudugudda, hubbly bubbly, and perhaps most common, hookah.

Connoisseurs swear by the succulence and richness of the flavoured tobacco smoked through a long, mesmerising, and oftentimes colourful hose; the ghalyoon has been the standard of smoking for centuries among the elites of the Mughal, Safavid, and Ottoman empires, a well-crafted instrument evoking an image of feminine beauty with its elegant and curvy profile. Whether it is the imposing lines that hint at an exotic mystery draped in puffs of smoke or an enchanting effect of the sound of gentle bubbling, the ghalyoon is a soothing symbol of relaxation and reminiscences of times long past.

The origins of the ghalyoon remain shrouded in mystery. The earliest incontrovertible written evidence of the existence of such a device comes from the report of Edward Terry, chaplain of the first English ambassador to the Mughal court, Sir Thomas Roe, in 1616. He describes it as a clay pot half filled with water, from which emerges a tube; the bottom end remains submerged in water while on top of this tube is placed loose tobacco and hot coals. The user would inhale the resultant smoke that has passed through the cool water through a hollow cane that is also inserted into the spout in the clay pot. Some believe that the hookah was invented by Emperor Akbar’s court physician, Abu’l Fath Gilani, in the late 1580s as a means of purifying the tobacco smoke when his patron took up the habit. However, the ghalyoon finds an earlier mention in a ruba’i by a Persian poet Ahli Shirazi in the court of Shah Tahmasp I that dates its probable origins to the 1520s:

“The hookah enjoys of your lips,
The pipe turns to a sugarcane in your mouth,
It’s not the smoke of tobacco around your face,
It is a cloud surrounding the moon.”

However, the etymology of one of the names for the ghalyoon—ghalyoon—suggests an even older history and association with India. Derived from the Sanskrit word for coconut—narikela—the name describes accurately a device that served much the same function as the modern hookah. Although tobacco was introduced to the subcontinent only in the last decade of the 16th century, its natives were not new to smoking when the gifts of the New World arrived east. In fact, smoking has a history that goes back to at least 2000 BCE in the subcontinent and to 5000 BCE in the Ecuadorian and Peruvian Andes. Native Americans smoked tobacco from calabashes and the excavations at Hyrax Hill in Kenya prove that smoking was an African pastime too, though dating the site has proven to be difficult. In India, smoking formed part of the Ayurvedic repertoire—dhoom netra involved the inhalation of medicated smoke passed through water to calm the vitiated doshas in the head and neck.

In this respect, the adherence to a modern origin of the arguileh narrative, such as in the tales of Ottoman and Iranian genius, seems implicitly biased towards the consumption of tobacco though the plant was actually a latecomer to the world of smoking. Nonetheless, it is the Safavids and Ottomans who get the most credit for creating the water pipe in its present form and popularizing it; they perfected the apparatus from its initial configuration of using coconut shells as the water receptacle to clay, wood, brass, and finally glass. Even today, hookahs manufactured in Iran, Turkey, and the Levant are noted for their exquisite traditional designs in glass and metal.

By the mid-17th century, as the English physician and travel writer John Fryer attests, the hookah had become a crucial part of upper middle class coffeehouse culture in India. It was equally popular in Iran and the Sublime Porte, as Jean-Baptiste Tavernier and Jean-Baptiste Chardin, two French gem merchants, note in their diaries.

Interestingly, there was fierce opposition to the habit then as there is now. In the second half of his reign, Sultan Murad IV (1623-1640) of the Ottoman Empire banned the narguileh in Istanbul upon pain of death. He also banned coffee and alcohol, though historians report that he was a regular drinker himself. In more recent times, the emirate of Sharjah forbade hookah aficionados their pleasure in 1993, as did Abu Dhabi in 1996 and Oman in 2001, while Tunisia banished the shisha from café terraces. Egypt has spent millions in a vigorous public campaign against the shisha and various Indian cities impose and lift bans on ghalyoon parlours at whimsy. None of this has ever deterred the hookah’s loyal worshippers anywhere; these laws were usually more honoured in the breach than the observed, and at best, it pushed hookah parlours underground for a short while until the ban was lifted or a more permissive mood returned.

Interestingly, none of the bans were prompted by health concerns, but by social factors. With an increasing number of women participating in communal smoke sessions by the late 19th century, the usual stick-in-the-mud guardians of morality worried about the presence of women in what were until then male-only bastions, and their marriage prospects. It comes as no surprise that the belly dancers some cafés introduced and waitresses in risqué uniforms missed their notice.

So what exactly is a ghalyoon and how does it work? Any piece has the following basic components—a base jar, a hollow metal stem that fits into the jar and makes an airtight seal, an ash collector, a clay bowl, a hose, a set of tongs, and a windscreen. Grommets are used between the bowl and the top of the stem and the hose and the centre of the metal stem to better seal the joints.

The tobacco—mu’assal, as it is known—is placed in the bowl on top and covered with a thin sheet of perforated aluminium. The jar is filled with water, and if large enough, plenty of ice, such that the bottom of the stem when it is inserted is about two inches below the surface of the water. The hose is attached and hot coal is placed on top of the aluminium-covered bowl. As the user inhales from the hose, the smoke is dragged down into the stem, through the water and into the air chamber in the base jar above the water from where it feeds the hose.

Hookahs come in many sizes but to optimize your smoking experience, it is vital to have a reasonably sized air pocket where the smoke can collect. If it is too big, you will be left light-headed due to inhaling too hard and if it is too small, a long drag on the hose will not be as satisfactory. Most regulars prefer their shishas at a height of between 26 and 32 inches. Ghalyoon regulars have historically been known to be very picky about their apparatus and consumables: not all tobacco qualified for use in the hookah. First, the leaves had to be washed several times to make the tobacco milder; then, the leaves were immersed in honey along with molasses and various flavours—apple, grape, mint, orange, watermelon, guava, peach, jasmine, strawberry, melon—and left to ferment. This is very similar to the techniques used to this day and due to the constant quality assessment required, the industry has resisted mechanization so far. Non-tobacco mu’assal is also available and some users even make their supplies at home.

Similarly, self-lighting coals are a strict no-no in the hookah community—for one, they contain more chemicals that are harmful but more importantly, they ruin the flavour of the smoke. Only small chunks of natural charcoal are used, rotated, and refreshed in a smoking session. Depending on the flavour you are smoking, some users like to spike their water jar with rose oil or pomegranate juice. For some of the new flavours enjoyed only by hookah apostates—coffee, Cola, chocolate, cigar, licourice, mojito, bubble gum—the base jar is sometimes filled with milk, orange juice, vodka, or other liquids that enhance the flavour of the tobacco.

The health effects of smoking hookahs have recently come under increasing scientific scrutiny as its popularity, particularly among college students, has soared. Although the negative impact of tobacco and smoke on the respiratory system cannot be denied, some studies have absurdly suggested that one hookah session—which usually lasts up to an hour—is equivalent to smoking a hundred cigarettes. These same studies also warn smokers of the deleterious effects of other chemicals in the hookah tobacco. However, any survey of middle-of-the-road to high quality hookah tobacco brands will reveal that they contain substantially less chemicals than are found in cigarettes. Furthermore, the tobacco content of mu’assal is much less. Since the mu’assal is placed in a clay pot and heated rather than burned, it also produces less tar than cigarettes. Lower nicotine content reduces risk of addiction. Admittedly, the water in the base, commonly believed to filter impurities, does not do so completely—its primary function is to cool the smoke.

Ultimately, how safe a ghalyoon is for you is a risk each of us will have to evaluate for ourselves. Yet, no one has put the distinction between modern smoking and the hookah more succinctly than Ismet Ertep, a 71-year old pensioner made famous by Stephen Kinzer’s Crescent and Star: Turkey Between Two Worlds. “Smoking a nargile is nothing like smoking a cigarette,” he said. “Cigarettes are for nervous people, competitive people, people on the run. When you smoke a nargile, you have time to think. It teaches you patience and tolerance, and gives you an appreciation of good company. Nargile smokers have a much more balanced approach to life than cigarette smokers.” It is this centuries-old custom and an atmosphere of quiet camaraderie that we lovers of the ghalyoon seek to ensconce ourselves in, in each session.
Until next time, stammi bene!

Jaideep A. Prabhu is a foreign policy wonk who is staunchly committed to the graceful art of living well. Prabhu is a certified scuba diver and an advanced brown belt in Okinawan Goju Ryu. He has studied, at various levels, the Classics, philosophy, literature, flamenco and Irish dancing, and the guitar. He enjoys cooking and is particularly fond of Mediterranean cuisines.