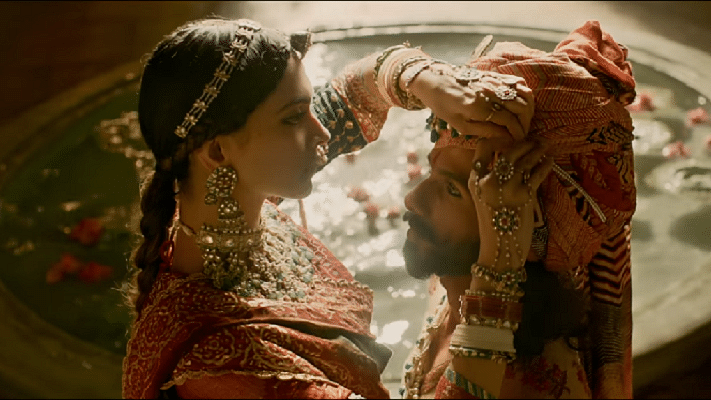 In the last few weeks, the roils over Sanjay Leela Bhansali’s Padmavati have reached a critical crescendo. Though few have seen exactly what it contains, the film’s release has already been delayed owing to controversies it has generated. After the censor board’s official verdict, it may face further cuts or strictures, running into further obstacles.

Once released, and its exact contents are known, people may continue to react to it or, more optimistically, give it their qualified approval. Perhaps, it may not, after all, be all that offensive to our notions of history. Whatever the outcome — ban, boycott, or appreciation, what will be reconfirmed, is the close causal relationship between capital and culture. We will once again see that a cultural world-system exists, important features of which are competing and contradictory narratives, each assiduously promoted and marketed. That these narratives also generate political capital and consequences should be equally obvious.

In the earlier two parts of this series, we have seen how forces of capital not only penetrate even the most insulated or remote parts of our culture, but create new patterns of behaviour, supplanting older value systems with habits of thought and consumption. It is the market that dominates culture; no aspect of culture seems to escape its impact. Music, dance, theatre, cinema, art, and literature — all seem to be under its sway and influence. The bottom line is clear — that something exists culturally, albeit humbly, is not enough. If you cannot capitalise, monetise, and market it, then it is of little use. This is the current trend in India. Where does that leave us?

So far, we have considered both capital and culture in their usual senses. But what happens if we consider culture itself to be a kind of capital? Pierre Bourdieu and Jean-Claude Passeron raised this question in the essay, “Cultural Reproduction and Social Reproduction” (1977). In a follow-up, “The Forms of Capital” (1985), Bourdieu defined three kinds of capital: economic capital consisting of money, assets, property; social capital, including networks of contacts and recognition, and cultural capital, covering education, knowledge, and competence.

Bourdieu was concerned with the reproduction of inequality in all these domains owing to differential diffusion, stratification and socialisation. All these processes predisposed the privileged classes to inherit not just economic or political, but cultural capital, too. In this manner, cultural “superiority” was reproduced and reinforced. Bourdieu was intent on unmasking how the political function of culture was disguised by a system of institutions, including state and privately-funded education, media, and cultural production, each of which ended up promoting social inequalities and stratification of privileges.

What happens when we deploy Bourdieu’s notion of cultural capital, not just within, but across cultures, nations, and civilisations? An innovative way to do this is by marrying Bourdieu’s idea of “cultural capital” with the once-influential world-systems theory. Led by stalwarts like Immanuel Wallerstein and Andre Gunder Frank, the world-systems approach posited that the capitalist global economy operates a system of dependency, leading, in effect, to the “development of underdevelopment.”

The dependentistas used a strategy that was opposite of the developmentalists. They questioned the developmentalist belief that advanced capitalistic economies helped to develop backward countries and regions. Instead, they came up with the hypothesis that underdevelopment was actually triggered, encouraged, and caused by development. Hence, the shibboleth, “development of underdevelopment”. In understanding the underlying structure of the world economy, they saw global capitalism as a way of engendering and reproducing unequal relations between what they termed the “core” and the “periphery”. The core extracted the surplus from the peripheries, rendering the latter totally dependent on the former. In other words, unequal and unjust terms of trade enforced the economic and social inequalities across the world.

In India, we were already familiar with such an economic model. During the heyday of colonialism, stalwarts Dadabhai Naoroji and Romesh Chandra Dutt had propounded the “drain theory”, describing the economic exploitation of India by British colonialism. In his celebrated book Poverty and UnBritish Rule in India (1901), Naoroji stated in the very opening line that “the present system of government is destructive and despotic to the Indians”. That very same year, Dutt’s Indian Famines, Their Causes and Prevention (1901), showed how British rule caused famines in India. In his Economic History of India under Early British Rule, published the following year, Dutt averred:

India in the eighteenth century was a great manufacturing as well as great agricultural country, and the products of the Indian loom supplied the markets of Asia and of Europe. It is, unfortunately, true that the East India Company and the British Parliament... discouraged Indian manufactures in the early years of British rule in order to encourage the rising manufactures of England….Millions of Indian artisans lost their earnings; the population of India lost one great source of its wealth.

The question is whether we can apply a similar model when it comes to culture. Can one cultural system exploit another until it causes terrible cultural deprivation and “famine” in the latter?

Obviously, cultural modelling cannot be data-based or empirical to the extent that we use mathematical formulae to verify it. But some of the most exciting recent work in economics, including the “nudge” Nobel won by Richard Thaler, is really about narratives broadly defined. Isn’t it? Thaler’s brand of behavioural economics emphasises “making it easy” — persuasion rather than regulation. As Thaler himself puts it, “if you want to get somebody to do something, make it easy. If you want to get people to eat healthier foods, then put healthier foods in the cafeteria, and make them easier to find, and make them taste better.” Cultural capital, in that sense, works pretty much like real wealth. It can be earned, accumulated, invested, hoarded, distributed, squandered, shared, and passed on from one generation to another.

When we apply the world-systems model to culture, what we notice, first of all, are asymmetrical power relations between core and peripheral areas. Further, peripheral states practise a sort of dependent culturalism, deriving their main ideas and cues from the core. Many of these areas also have pre-capitalist modes of cultural exchange as opposed to totally capitalist cultural production of the core states.

The result is that the peripheral areas suffer from blocked or inadequate cultural capitalisation, while the core states are autoarchic and dynamic. In fact, they are neo-imperialist, culturally, invading and impacting faraway lands because their culture industries are so well-developed and funded. Again, as in the economic world-system, the cultural world-system, too, has in-between states, which may be said to be semi-peripheral. Homi Jehangir Bhabha called such interstitial areas “third space”.

The terms of trade are, in other words, stacked against the periphery. Needless to say, in our context, the core consists of the imperial and neo-imperial powers which are the periphery and semi-periphery of the once-colonised states. When it comes to Anglophone cultural production, by and large, the invaded colonies in Africa and Asia are at the periphery, while the semi-periphery consists of the settler colonies such as Canada and Australia. The cultural core remains very much centred in the United States and United Kingdom, as far as the English-speaking world is concerned.

At this stage, some important clarifications and caveats are of course in order. First, that development and underdevelopment, in the cultural sense, are not to be taken merely at face value. The underdeveloped countries may actually have a higher level of culture than the developed countries. Indeed, this was one of M K Gandhi’s theses on modernity in Hind Swaraj (1909). Gandhi argued that Western civilisation, by succumbing to modernity, had actually regressed, at least morally and spiritually, while colonised Indians could still be proud of their traditional civilisation.

This reversal in which the poor, somehow, were culturally superior to the rich, was an important strategy in the process of decolonisation, which Gandhi led. But the poor are still underdeveloped when it comes to the extent to which they have managed to capitalise their culture. Measured in terms of the market, they are culturally underdeveloped. Moreover, today, poverty or any form of deprivation, let alone underdevelopment, is no longer considered a credible marker of progress, prosperity, or superiority.

To return to the Padmavati controversy, we can easily see how a complex network of nudges reproduces certain images of India. A colonised, “pagan” culture, it is obvious that India is usually portrayed in negative terms. Sometimes it is exoticised as in the classic Blake Edwards’ Peter Sellers starrer, The Party (1968) or it is demonised as in Indiana Jones and the Temple of Doom (1984). Indians, especially Hindus, are shown as stupid, superstitious, irrational, mystical, half-naked, and uncivilised.

These neo-colonial tropes and stereotypes, prevalent earlier in literature migrate to celluloid and digital landscapes quite easily. Scores of Hollywood films set in India, including Richard Attenborough’s Gandhi (1982) or David Lean’s Passage to India (1984) try to show that British rule wasn’t such a bad thing after all. Even Slumdog Millionaire (2009), in depicting the dark side of independent India, ends up making the West feel much better about itself, especially during its economic meltdown. No surprise that the last three films were among the highest Oscars-getters in recent memory.

Closer home, Bollywood, too, works to sanitise the worst aspects of Muslim rule in India. It does so either through romantic portrayals of historical legends such as Anarkali (1953) or Mughal-e-Azam (1960), a recent example in the same genre being Jodha-Akbar (2008). Another common ruse is the ‘Muslim social’, which itself undergoes several alterations and transformations, especially with revisionist texts such as Chaudavi ka Chand (1960) or Pakeezah (1972). But, in all, such movies create a nostalgia for a mannered, lost, all-Muslim world, marked by tragedy. Usually, one of the main characters, often a woman, dies.

The cultural world-system is still dominant, if we go by the vociferous support to Bhansali not only in India but all over the world. Again, the debate is being framed as a fight between artistic freedom and Hindu fanaticism. But what is different this time is that the response, too, is multi-pronged and vigorous, ranging from unacceptable violence and threats to much more sophisticated arguments and rebuttals.

Can we re-rate our cultural production in a manner similar to Moody’s re-rating of our economy? Can we alter our position in the cultural world-system from a peripheral and dependent player to a creator of original and powerful new narratives? The answers to such questions demand a deeper study and understanding of the cultural world-system, our role in it, and how we may sue for better cultural terms of exchange.