Sabarimala And The Tyranny Of Equality 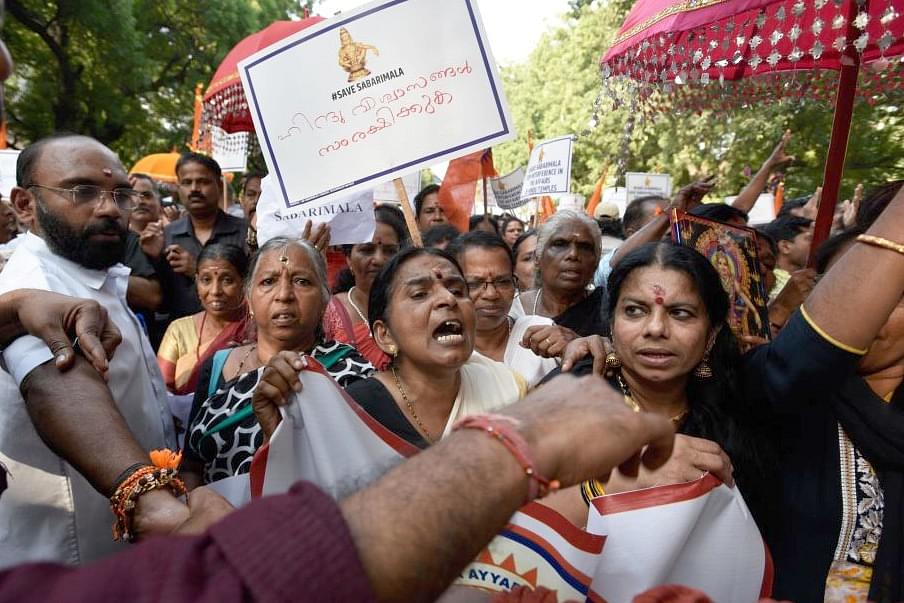 “Liberte, egalite, fraternite” was the rallying cry of the French Revolution, more than 200 years ago. The revolutionaries had sold “liberty, equality and fraternity” as one cogent argument for democracy and republicanism. To their dismay, however, they would find that the first two ideals are in direct conflict with one another. Constitutional scholars have waxed eloquent about this conflict over the years. This conflict has animated more than a few legal cases, but in the current context, it has resulted in the Sabarimala judgement and the subsequent controversy over its implementation.

Liberty, colloquially speaking, is the right “to be left alone” by the state. That is, to prevent the state from interfering in one’s activities. There are many verticals to liberty – political, social, cultural, religious and more. Equality, on the other hand, is to ensure that the state does not favour one individual or group over another. The citizens have a right to be treated equally regardless of class, caste or gender. This does not mean that there is an absolute right to liberty or there is an absolute right to equality from the state, however. They are limited to varying degrees. The conflict between liberty and equality flows from their fundamental conceptions. Their end goals are inimical to each other. To ensure equality between all would be to deny liberty to all, while an attempt to give absolute liberty to all would be to deny equality to all. This is an eternal conflict, one that is found in every liberal democracy across the world. But there are indeed clear diktats of where a citizen’s right to equality and liberty ends and begins, especially when it is the rights of two citizens or groups that are in conflict.

The conception behind constitutional rights has always been to protect the rights of individuals and groups against the pervasive power of the state. The constitutional document is in essence a compromise between the state and its citizens, that reserves the state certain power, and the citizens certain rights. This is meant to protect the life and liberty of the citizen, but it can also be viewed from another standpoint. Constitutional protections and guarantees protect the legitimacy of the state as well as the citizen. By stopping the state from undertaking tyrannical decisions, it quells the possibility of popular discontent against it, thus protecting its legitimacy. Otherwise, it risks the legitimacy of state institutions in the eyes of the citizens. If the state fails to protect the interests – in this case, the religious liberty of Ayyappa devotees, it will manifest in popular discontent and violations of law and a disruption in public order as we have seen over the past few weeks in Kerala.

The Origins Of Religious Liberty

The Sabarimala issue has been framed as one of gender equality, that of discrimination and patriarchy. That, however, is not the case, regardless of the complicated prose and poetry that one side produces. The question is clearly one that of religious liberty – that of Ayyappa devotees like myself to worship Ayyappa in his form at Sabarimala. There is no great purpose served by this interference by the state, and if one were to look at the response of Malayali women, the judgement has caused great anguish in their minds. The questions they and Ayyappa devotees raise are valid: the celibate nature of the deity at Sabarimala is essential to the faith and belief there. For the court to say it is not, is a breach of religious liberty.

Many sovereigns also recognised that the end of religious conflict lay only in reconciliation. It was in this spirit that Henry IV of France had issued the Edict of Nantes, which guaranteed the Calvinist Protestants certain rights in 1598. Henry IV had his personal reasons to issue the edict (he was born a Protestant and converted to Catholicism only years earlier), but it changed the fundamental nature of relations between the state and religion. Almost 200 years later, the newly-established United States of America adopted the First Amendment to the United States which prohibited the establishment of a national religion as well as restraining the Congress from “prohibiting free exercise of religion”. The French Declaration of Rights of Man and Citizen also protected religious liberty under Article X, stating:

“No one may be disturbed for his opinions, even religious ones, provided that their manifestation does not trouble the public order established by the law.”

In India, our Constitution has listed the Right to Freedom of Religion from Article 25 to Article 28. The core of the religious liberty is given in articles 25 and 26. Article 25 states the individual right to practise religion, while Article 26 gives the right to establish and maintain religious institutions to every religious denomination and section. Article 26 aims to protect the rights of not one group or community, but that of all communities, every sect or group, no matter how small. The only restriction imposed on these groups is that they don’t contravene public health, order or morality.

Not only did the Supreme Court refuse to recognise Ayyappa devotees as a separate denomination under Article 26, but it also stated that under Article 25, women were “equally entitled” to practise religion as others. The problem, of course, is that the diktats of the religion (through local scriptures and traditions specific to the Sabarimala temple) itself say that women of a particular age are to be excluded from the temple.

Thus, if a woman of that age wished to ‘practise religion’ then it would violate the diktats of the religion itself. The court, however, seems to have ignored this contradiction. The court has in its history decided multiple times what practices are ‘essential’ or not. All this begs the question of how the Supreme Court reached this position where it became the supreme theological authority of the country. In the Sabarimala judgement, the court has held that the practice of not allowing women of menstruating age to enter the shrine is not “essential” to the Hindu religion and, therefore, not protected by Article 25. The authority of the Supreme Court and that of the state is material – it is not temporal. The temporal authority of the temple is vested with the tantri (the hereditary head priest) of Sabarimala, and not with the Supreme Court, the Kerala Government or the Indian Union. To infringe on such a right is the most egregious violation.

How the Supreme Court did not consider the denominational rights guaranteed under Article 26 still boggles the mind. The interference in religious practices, backed by absolutely no legislative support, but rather on the claims of fundamental rights by the highest constitutional court is unheard of in any other democracy. The judgement opens the portal for interference into the customs and religious traditions of every community in the country. That might appear to some as a positive, as an avenue for great “social reform”. This would, however, still be a disquieting violation of religious liberty. An equal violation of everyone’s liberty by eliminating all practices and customs that the Supreme Court deems repugnant to constitutional morality is not ‘social reform’ but rather would be the trampling of constitutional rights by the court that it is supposed to protect.

There is yet another facet of religious liberty, the concept of ‘secularism’, the separation of religious institutions from the state. The state does not interfere in the conduct of religious institutions, and vice-versa. This is, of course, not the case in India, since the state controls hundreds of thousands of temples, a most blatant violation of secularism. By interfering in the practices of a temple, the court has violated that principle of secularism that it so zealously promotes otherwise.

Let me put a disclaimer here – to comprehensively criticise the judgement and its observations would be an endeavour that is way beyond the scope of a single article. It remains as one that will be subject to analysis and criticism. To those who believe in liberty, 28 September, the day the Sabarimala judgement was delivered, will be a black letter day. To many millions of devotees of Ayyappa too, it will be a day of immense pain and anger, as has been the last several weeks.