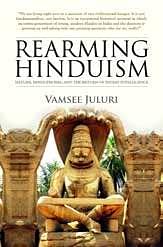 Juluri debunks the Orientalists, and tries to give a “true” interpretation of Hinduism.

Recently an angry mob, predominantly Christian, broke into a jail in Nagaland and lynched an alleged rapist, a Muslim. The American media, points out Vamsee Juluri, author of Rearming Hinduism, reported this as a law and order problem, not as a case of Christians attacking a Muslim.

Around the same time, a nun was gang raped within the premises of a convent school in a town near Kolkata and a few months before this, a few churches were burgled in Delhi. Both the incidents were widely reported as rising cases of intolerance towards the minorities in a Hindu majority India, though none was found to be any act of communal violence.

A thought can’t but arise in the mind that perhaps, very consciously, an aura of Hinduphobia is being created.

It is in this context that Rearming Hinduism becomes very relevant. The author first defines the premise of Hinduphobia as something being created and perpetuated in Western academia and media which even went to the extent of relegating the 26/11 massacre by Pakistani terrorists as a reaction to the rise of “Hindu extremism” in India. The misconception about Indians (or should we say Hindus?) is not restricted only to contemporary affairs. Western academia is replete with works, the author points out, of the likes of Wendy Doniger who likens the ancient Hindus to the cowboys who massacred Native Americans and even the Nazis.

Juluri symbolically uses on the cover of his book the image of the Narasimha, an iconic statue in Hampi, depicting a man trying to write something even though one of his hands is cut, to stress on the need of Hindu academics, “not prudes, not militants”, to write their true history to counter the flawed and misinterpreted “alternative” history.

While talking about the ideologies of Hinduphobia in the first part of the book, Juluri shows how mainstream academia has “lost sight of Hinduism”, relying on “a particular set of ideas, assumptions, and stereotypes”. He makes a very interesting point that what is actually being mooted as the “dominant” all pervading view, has effectively become a very marginal one, totally overshadowed by the “alternative” views of the likes of Doniger, who rants about the Nazi-like violence of the Aryans but sees the Mughal age as an age of dialogue and tolerance.

In the second part Juluri talks about the Vedas and Upanishads, Krishna and Rama and the Gita, from a Hindu viewpoint, in contrast to the mainstream, heavily published and often flawed “alternative” views.

In the second part Juluri talks about the Vedas and Upanishads, Krishna and Rama and the Gita, from a Hindu viewpoint, in contrast to the mainstream, heavily published and often flawed “alternative” views.

Rearming Hinduism is indeed a very apt book to counter the many misinterpretations of Indian culture and the stereotypes and clichés about it prevalent in the academia and media, not necessarily restricted only to the West. There are a few things though, which, if they were handled better, could have had a greater impact on the very people for whom it’s written—the non-fundamentalist, non-militant and academic Hindus.

The excessive criticism, not only of Doniger, but also of the likes of Amartya Sen and anyone else who espouses any view different from that of the author with regard to Indian history or culture, may not be palatable to everyone.

The author touches base on many issues and myths but doesn’t put forward a proper scientific or historic analysis to debunk or accept a theory. He conveniently accepts the out-of-India origin of the Aryans, attacking anyone who disagrees, but doesn’t provide any historical basis for his claim.

Juluri finds Sen’s highlighting of the reigns of Ashoka and Akbar as golden epochs in the annals of Indian civilization objectionable just because neither of them were followers of Hinduism. Such a ground for attacking Sen appears clichéd and reactionary, something which Juluri himself accuses secularists and Orientalists like Doniger and Sen of being.

Another aspect that can perhaps create some confusion in the minds of a wider range of readers is Juluri’s reference to May 2014 as some sort of a reckoning of a new era in the Hindu history. Though he never takes the name of Narendra Modi, the indirect references to his becoming the PM and the BJP coming to power in May 2014 leave no suspicion in the minds of the readers about the significance of May 2014. This is somewhat irrelevant and out of context to the main intent of the book, which is to establish the real narrative of Hinduism against the so called mainstream, and often flawed, Hinduphobic Orientalist one.

[/level-subscriber]
Sudipto Das, an IIT alumnus, is an author, musician and columnist. His debut novel The Ekkos Clan published in 2013. Trained in western classical music, he is the founding member of a music band Kohal. During the day, he works as the VP Engineering in a semiconductor firm in Bangalore.
Get Swarajya in your inbox everyday. Subscribe here.
Tags: