The Sloggers Win The Race: A Review Of Saurabh Mukherjea’s Book, ‘The Unusual Billionaires’ 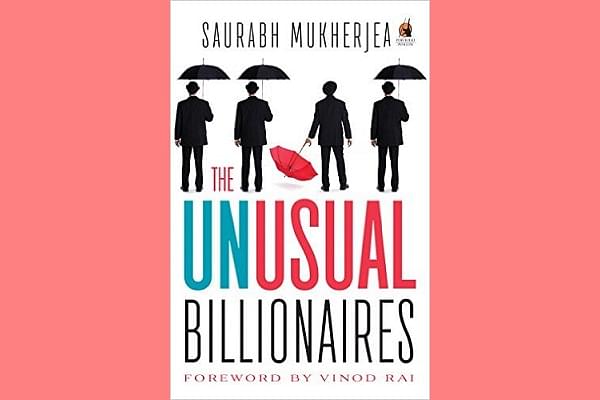 The genuine success stories of Indian businesses have not really received the attention and focus that they deserve. This is not because the reasons for their success are difficult to decipher; it is because most business and corporate analysts on these shores concentrated on the companies that appeared to have done well. The PR blitzkrieg that many such companies had launched and assiduously carried on in the media and the academic world blindsided most observers and commentators. To be scrupulously fair, this latter bunch, too, did not bother to put on their thinking caps.

We now have a study by a person who lives in the midst of the arena – a practising investment banker and analyst who earns his bread, if not his caviar, by studying the participants in the hurdles race that the world of business represents. His conclusions are surprising and interesting. The true thoroughbreds are not those who “have flair, flamboyance and a certain sense of extroversion”, but those who are “unflashy, introverted, determined and intelligently tenacious”.

This is not exactly Nobel Prize-level analysis, certainly not in the league of, say, Thomas Piketty, the bogey man of the desi Indian business media and many of the new occupants of Lutyens Delhi’s corridors of power.

However, the author, Saurabh Mukherjea, does seem to have hit the jackpot in the academic and intellectual sense. Innovative thinking does not have to be earth-shattering, and many new insights that later acquired iconic status came from mundane and down-to-earth perspectives. One can quibble about how profound the author’s research platform is, but there is no doubt that he has trodden a path that few others, if any, have done in this country.

This is a book worth going through, not because it throws new theoretical light on the entire subject of business and corporate success, but because it constructs a reasonable framework for assessing it. It also gives a wealth of data and facts on the Indian corporates who have passed the litmus test.

At the core of the author’s analytical framework of business success are the three mantras that successful companies must follow if they want to succeed in the long run. The first is that they must focus on the long-term (more than 10 years), without getting sidetracked by short-term distractions.

The second is that they must constantly protect their core franchise by “deepening the moat” around it. Shorn of its medieval connotations, this basically means protecting one’s turf. The third basic policy they must scrupulously follow is to allocate capital seriously and carefully and not fritter it away on “expensive and unrelated” forays.

This is the exact approach that all the eight companies in the author’s list of “first among equals” meticulously followed. As a result, they have passed the two filters that Mukherjea has set up in order to identify the true winners. These two filters are a 15 per cent Return on Capital Employed (ROCE) and a 10 per cent growth of revenue over a 10-year period. Companies that manage to meet both these criteria every single year in the last 10 years are classified as the real champions and can enter the corporate Indralok, where they will reign until they fail to maintain the prescribed standards.

The eight companies that pass Mukherjea’s two-stage filter test are Asian Paints, Astral Poly, Berger Paints, ITC, Marico, Page Industries, HDFC Bank and Axis Bank. Apart from Astral Poly and Page Industries, all the other six will be easily recognised by the layperson, for a variety of reasons.

The two banks may be a family bank for many ordinary citizens, while ITC, Marico, Berger and Asian Paints have high public profiles that lead to instant recognition. In fact, the success of Asian Paints may also be partially attributed to its extremely effective advertising weapon, the naughty young boy, Gattu, conceptualised by R K Laxman in 1954.

A significant portion of the book is devoted to detailed assessments of the successful companies that the author has shortlisted, and we will come back to this segment later on. Interestingly, there are some short vignettes on some Indian corporates that hit the high road briefly, before falling by the wayside, some of them quite ignominiously. They did not quite qualify for Nabha Sparsham Deeptam for more than a short period.

Take the case of Punjab National Bank (PNB). Its Return on Equity saw a free fall from 27 per cent in the financial year (FY) 2010 to 10 per cent in FY 2014. Accompanying this was a tail-slide of its loan book growth from around 20-30 per cent till FY 2012, to less than 15 per cent from FY 2013 to 2015. All the media pundits who were crowing about the great performance of PNB six years ago should have committed harakiri after leading so many investors up the garden path, but introspection and integrity do not feature very prominently in their lexicon. PNB currently ranks very high among the list of public sector banks that have criminally high non-performing assets.

Among the industrials that have also fallen off their pedestals are one-time stock-market icons like Cipla, Infosys and IPCA.

Cipla, the venerable Mumbai-based pharma giant, a one-time darling of the electronic media spielmeisters, saw its ROCE plummet from 24 per cent in FY13 to 15 per cent in FY15. This was accompanied by a precipitous drop in its rate of revenue growth by nearly half. Corporate insiders say that this was the inevitable result of the gradual withdrawal from business of the elder Hamied brother, Yusuf, a highly-qualified biomedical scientist who had guided the company to hitherto unscaled heights from the 1980s onwards.

Infosys, too, was a victim of the same malaise. After the departure of Narayana Murthy and the other founding parents, the company’s management seemed to have lost track and meandered for many years. The iconic corporate is beginning to climb back to its earlier pedestal, but it is not an easy path.

Returning to the eight success stories, the book devotes a significant amount of space to the methods that seven out of the eight adopted to stay on their enviable trajectories. Inexplicably, ITC does not feature in this detailed case studies segment of the book, though there is a small three-page assessment later on, in a chapter that studies how corporates achieve “greatness”. In many ways, the seven case studies constitute the most interesting section in the book. There is a wealth of information and data here, especially financial figures, that will make this book required reading for serious analysts and researchers, not to mention many lay readers.

To make the book interesting and readable, the author has provided many snapshots of the key people involved in the entire saga. Clearly, this has involved a fair amount of legwork and interviews, in addition to the collection of secondary data.

Finally, Mukherjea rounds up his work with two chapters that explain his understanding of the foundations of business success. These are semi-theoretical but not too abstruse for the informed lay reader. In an appendix, he acknowledges his indebtedness to the British analyst John Kay and his theoretical framework, IBAS, which has influenced him. IBAS stands for innovation, brands and reputation, architecture and strategic assets. Nevertheless, Kay is not really a titan among scholars in this field, although this assertion of mine would require a more detailed essay in another forum.

The icing on the cake, though not for general readers, is the last two appendices where Mukherjea explains the construction of the two filters of success mentioned earlier. There is hard empirical work involved here, and professional analysts will definitely find a lot of material for further study.

Saurabh Mukherjea shows promise, and one hopes to read more from him in the future. Perhaps a more incisive assessment of the theoretical frameworks that can explain corporate success?