The Third Sanskrit Revolution: If Not In India, Then Where? 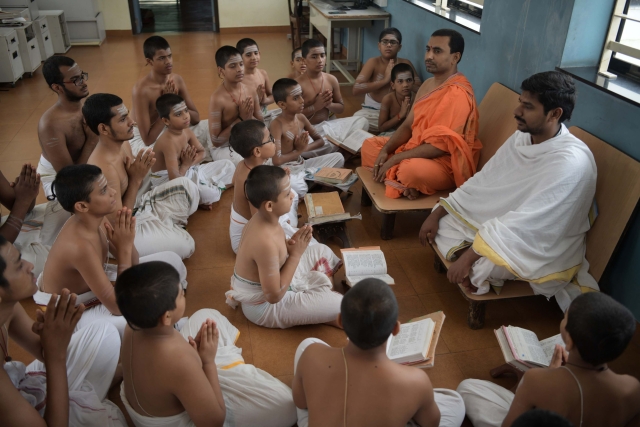 Sanskrit is universal and stands the test of time

Type on your web search engine: “the top ten most pirated books of 2009”. What will you see? A Sanskrit book: the Kamasutra. You can dismiss it by saying: “it’s not about Sanskrit, it’s all about sex”, but you will be missing the point. What matters here is that Sanskrit had something meaningful to say about sexology. So meaningful that, even today after more than 1,500 years, it still has a strong appeal over the whole world. The same could be said, albeit in different degrees, about mathematics, astronomy, medicine, grammar, phonetics, computational linguistics, pharmacy, industrial chemistry, metallurgy, aesthetics, political sciences, psychology and, of course, yoga and consciousness studies. Even in gaming: the best ever strategy game bears a Sanskrit name: chaturanga or chess.

The meaningfulness of Sanskrit implies that it is universal and stands the test of time. It also means that it has deeply influenced the sciences of other cultures. Arthur A MacDonnell, the well-known British scholar, wrote:

Since the Renaissance, there has been no event of such worldwide significance in the history of culture as the discovery of Sanskrit literature in the latter part of the eighteenth century.

Perhaps, he was exaggerating, but we have almost forgotten what the discovery of Sanskrit meant for European scholars in the nineteenth century. Take for instance, the study of language. European scholars knew almost nothing about phonetics or the study of speech sounds. They could not distinguish between voiced and unvoiced consonant. Voiced consonants are made by vibrating the vocal chords, while unvoiced consonants do not produce such vibration. There are several pairs of consonants — like k/g, ch/j, p/b or t/d, where the mouth position is the same, but the voiced/unvoiced distinction makes them different. For example, p and b are both labial, because to pronounce them you use the lips. They differ, because p is unvoiced and b voiced. The same could be said of t and d. Both are dentals, since to utter them the tip of the tongue touches the teeth, but t is unvoiced and d is voiced. By the way, many technical terms of modern phonetics, like labial (osthya), dental (dantya), occlusive (sparsa), aspirated (mahaprana) or voiced (ghosa) to mention just a few, are just translations of Sanskrit terms that were already known 2,500 years ago!

Modern linguistics would have never been born without the discovery of Sanskrit by Western scholars. The grammar of Panini describes the whole Sanskrit language in 4,000 rules. If you print it, it would hardly take 40 printed pages. Paninian rules were coded in a metalanguage that allowed them to be extremely brief. If you decode those into natural language, it would turn into a book of more than 500 pages. American linguist L Bloomfield said that the grammar of Panini was one of the greatest monuments of human intelligence. In fact, we could easily say that Sanskrit itself is one of the greatest monuments of human intelligence.

The discovery of Sanskrit had a profound impact, not only in linguistics, but also in the social sciences of the nineteenth century. This is, what I call, Sanskrit second revolution. The first one took place in the Middle Age, when Muslim scholars transmitted Indian wisdom to the West, mainly through the Spanish Al-Andalus. Muslim authors such as Al-Khwarizmi (mathematics), Avicenna (medicine), Al-Farghani (astronomy), who were deeply influenced by Indian texts, made available Indian science to the West, thanks to efforts of the Toledo School of Translators. It appears that the first Arabic numerals, in fact Indian, which were written in Europe, are in the codex dI2 at El Escorial (Madrid). Muslim authors, such as Ibn Said from Almeria (Spain) in his eleventh century manuscript Ṭabaqāt al-ʼUmam (categories of nations) did not hesitate to acknowledge his debt to the Indian world. The image of India as a land of knowledge entered Europe through the Islamic world and became common knowledge to the European Enlightenment. French writer Voltaire saw India as the cradle of human civilisation and as the inventor of numerals, chess and didactic fables.

You may say: “well, this is all the past. What about the future? Can Sanskrit still deliver a third revolution?” To put it in less strong terms: Is Sanskrit today relevant to the modern world? I believe that Sanskrit is a living discipline that still can contribute to solve some of the problems raised by modern human sciences.

Pardon me, if for a while, I go into some technicalities, but to prove my point I would like just to mention several analytical devices that were discovered in the West only in the twentieth century. On the other hand, the Indian savants consciously employed these concepts many centuries ago. To number just a few: the zero suffix, the distinction between language and metalanguage, the usage of context sensitive rules, the fact that grammar was conceived almost as a programming language able to produce an infinite number of well-formed expressions. We still have not understood all the potentialities of Indian ontology and logic, nor have we tapped all the technical resources that the hermeneutics of mimamsa can offer us. In other areas of Sanskrit, we are witnessing the increasing interest of the modern world in such things as Sanskrit aesthetics exemplified in the theories of rasa and dhvani, which help us to understand the nature of aesthetic delight. There is interest in many areas of philosophy. For instance, the description of the human mind as a material unit of four distinct elements: buddhi, citta, ahamkara and manas. The distinction between mind and consciousness, so blurred in the West, is essential for consciousness studies. Mindfulness, as a technique of healing and concentration, has become so popular, that we have forgotten its Indian origin.

Today, many people take interest in Sanskrit because of yoga, ayurveda and meditation. Sanskrit and its derived languages, like Pali and the Prakrits, have a wealth of literature on the mind as an instrument of liberation and not of addiction and depression. To cut it short, there are still many things to be discovered in the Sanskrit texts that could be useful today. The problem is that to retrieve them is not an easy task. On one hand, people having a sound knowledge of Sanskrit commentaries, too often, show little interest in the related Western disciplines. On the other hand, people having a good understanding of today’s most-relevant issues generally have a very fragmented knowledge of the Sanskrit sources. Bridges need to be built between the two worlds and Sanskrit studies should apply its efforts to the common task of the bridging the gap between Eastern and Western human sciences.

One thing is clear. The third Sanskrit revolution can only begin in India. If India does not take Sanskrit seriously, nobody will. A few recommendations are in place:

1. Protect traditional Indian scholars. They are an endangered species and a storehouse of neglected knowledge. If they perish, the understanding of Sanskrit texts would become more difficult. Indic Academy has already started doing it.

2. Do not consider Sanskrit as representing a backward way of life. Sanskrit texts are full of open-minded and liberating ideas. We should stress its rational and liberal qualities. Be modern and use Sanskrit to decolonise your mind.

3. At the same time, do not forget that Sanskrit is not only an analytical language, but also a spiritual one, good for singing and meditating. A language for humanity and world peace. A language for dialogue.

4. Do not link Sanskrit to a particular ideology. Even if you are a devout Hindu, project Sanskrit as what it has always been: an open window to many, and often conflicting, views.

5. Make Sanskrit accessible. As Samskrita Bharati has proved, Sanskrit can be easily and joyfully learnt by those who already know an Indian language.

6. Build a strong net with foreign scholars. Sanskrit is cultivated by small groups of people all over the world from Japan to Argentina, from the US to Russia, from South Africa to Sweden, from Thailand to Costa Rica.

7. Be real. Do not make false claims. Sanskrit is neither the mother of all languages, nor the most ancient one. Sanskrit is not the most suitable language for computers. Sanskrit does not need empty claims. It has already many strong points. Strive to discover them.

8. Make Sanskrit universal, like yoga. However, do not forget its Indian origin.

9. Use Sanskrit to build a strong Indian culture with a soft heart, a culture that is universal and non-exclusivist, open to diversity and that uses one of the most refined and cosmopolitan languages that human intelligence has produced: Sanskrit.

To conclude, Indian intellectuals through centuries cultivated Sanskrit knowledge systems. These intellectuals have now mutated into a legion of Indian scientists, doctors, physicists, mathematicians, engineers and computer wizards, who work all over the world. India is only applying her secular genius to the field of modern science and achieving the same degree of excellence that she achieved in ancient times. That is why it is important for India not to cut its ties with the past. This is called the long-term consistency of a civilisation, which lies at the root of its very survival. Sanskrit is part of this long-term consistency. Let us not dismiss it.

Oscar Pujol is a Catalan Indologist. He spent 17 years at BHU, Varanasi, taught Spanish there and obtained a PhD in Sanskrit. He has written numerous papers on many aspects of Sanskrit language and philosophy. Amongst his many contributions to India and Sanskrit is a Sanskrit-Catalan dictionary.