To The Space And Back: Is ISRO Up For Modi’s Challenge? 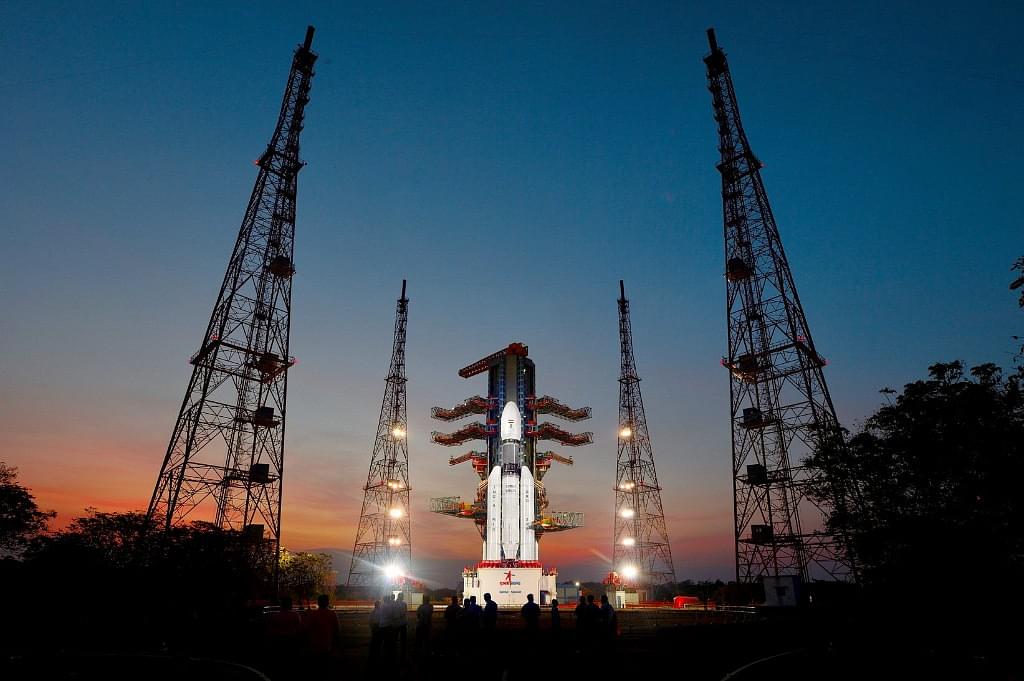 Ahead of Prime Minister Narendra Modi’s Independence Day speech this year, the defence beat was abuzz with speculations of a major announcement about the much-awaited military reforms. Although none came, the announcement section in newspaper graphics of his speech did not go empty the next day. In fact, it appeared, graphics teams had to work overtime to put a human in space — literally and figuratively — as Modi stamped his approval on India’s space dream.

The Prime Minister, speaking from the Red Fort, set a deadline of 2022 — when India will celebrate the seventy-fifth year of Independence — for the country’s first manned space mission. The announcement, however, wasn’t a surprise for many, as the Indian Space Research Organisation (ISRO) had been working on human spaceflight capability ever since it proposed the mission for the first time in 2004, and despite no formal approval and deadline from successive governments.

Since the announcement, ISRO has given out some information about its man-in-space plan, which is still evolving. The agency aims to put up to three Indians in space for five to seven days through a 16-minute flight across the Earth’s atmosphere into a 400 kilometre-high low-Earth orbit (LEO) and bring them back with a 36-minute glide and a splashdown in the Arabian Sea off the coast of Gujarat.

Sure, this sounds ambitious. But, that’s not all. While it may appear that ISRO has over three years to prepare for the launch of this mission, it has far lesser time. Before the actual launch, for which it has set the deadline as December 2021, the agency plans to conduct two manned test flights. The first test will be conducted in December 2020 and the second in June 2021. Therefore, ISRO has little over two years to integrate the systems and technologies it has developed over the years for this mission and make it work as one unit.

Can ISRO accomplish what Modi has promised?

If chairman Kailasavadivoo Sivan is to be believed, the agency has already developed most of what it needs for such a mission. This includes the crew module, escape system, flight suite, deceleration parachutes, Geosynchronous Satellite Launch Vehicle Mark-III, and environmental control and life support system.

ISRO was working on these systems and technologies even as its most ambitious mission till date — the Mars Orbiter Mission or Mangalyaan — entered its most critical phase. Just days after Mangalyaan entered the orbit of the red planet, the agency successfully tested its crew module — part of the spacecraft which provides a safe habitat for astronauts during the mission.

In its early years, ISRO had benefitted greatly from its close cooperation with the then Soviet Union. Its impact was visible even in the manned space programme, where the agency had selected Russian spacecraft Soyuz — a version of which carried Indian Air Force pilot Rakesh Sharma to space from Soviet Kazakhstan’s Baikonur cosmodrome in April 1984 — as the model for its crew vehicle. However, unlike China, which had acquired Soyuz capsules and technology from Russia in the mid-1990s to build an identical system called Shenzhou, ISRO did not buy the spacecraft off the shelf to make its own through reverse engineering. This could possibly be the reason why ISRO’s crew vehicle seems to be a two-module solution, unlike the three-module design of Russia’s Soyuz or China’s Shenzhou.

Interestingly, ISRO has also been working on a reusable space shuttle and had tested a version of it in 2016. Unlike Soyuz or Shenzhou, a shuttle works like an aircraft after it re-enters Earth’s atmosphere and lands on a runway like a fighter jet. However, it may not be operational anytime soon. Therefore, the agency is likely to go with a single-use Soyuz-like design, which will be rendered unusable upon re-entry into the atmosphere, for at least the first few human spaceflights missions.

When the crew module re-enters the Earth’s atmosphere during its descent, it could experience deceleration of up to 13g and the temperature on its outer surface may touch 1,600 degrees Celsius. To protect the module from the searing heat, ISRO has developed a heat shield, which was successfully tested in an experimental flight on 18 December 2014, along with multiple pairs of decelerating parachutes — ranging from 2.3-metres in diameter to 31 metres, the latter being the largest ever to be made in India.

While the heat shield will protect the module from the outside, the environmental control and life support system will provide clean air and water to the crew inside the capsule, will be responsible for maintaining normal temperature, pressure and humidity inside the habitable sections of the spacecraft, and may also have hardware for fire monitoring and suppression. For the safety of the astronauts, ISRO has also developed a flight suit, which was displayed at this year’s edition of the Space Expo held in Bengaluru. In case of a rapid reduction in air pressure inside the capsule, umbilicals in the flight suit can be used to connect directly with the life support system.

The escape system safeguards the crew against the failure of the rocket during the launch or the early stages of ascent. In case of launch abort due to an emergency, such as an impending explosion, the system pulls the crew module along with the astronauts to a safe distance from the launch vehicle. The crew module rises into the sky and heads out to sea using its small but powerful quick-acting motors and deploys its decelerating parachutes to land with astronauts onboard.

The only time a crew escape system has been used so far was in 1983, when it saved the lives of two cosmonauts, who were preparing for launch to the Salyut 7 space station of the Soviet Union. Apart from Russia’s Soyuz, US’ Mercury, Apollo and Orion spacecraft and China’s Shenzhou also use similar systems. In the early phase of their human spaceflight programmes, the US and Soviet Union used ejection seats, similar to those used in fighter jets, to pull the crew out of danger. Boeing and SpaceX, which are currently working on their Starliner and Dragon spacecraft for the US’ commercial crew programe, are developing a new generation escape system.

ISRO’s crew module, carrying astronauts, will be attached with a service module. Together, these two modules will make up the orbital module, which in turn will be integrated with the launch vehicle — GSLV Mark-III. While ISRO is yet to develop the service module — part of the spacecraft that houses support systems for spacecraft operations and propulsion in space, GSLV Mark-III is ready.

The GSLV Mark-III, India’s third generation orbital launch system and the heaviest till date, is capable of lifting up to 10 tonnes of payload to the LEO, enough to carry a manned module. The first flight of the vehicle was conducted in June 2017, and ISRO has confirmed that it will use this vehicle for the launch of the mission. With multiple launches of the vehicle planned before 2020, it is likely to mature before the first test flight of the manned space mission. As an aside, GSLV Mark-III has also made India capable of launching larger satellites, as heavy as four tonnes, to the Geosynchronous Transfer Orbit (GTO). Earlier, India was dependent on a heavy-duty rocket developed by Arianespace, world’s first commercial launch service provider, for placing its heavy communication satellites into the GTO.

Arguably, ISRO has covered a long distance in its preparations for the manned mission. However, a basic unit for the launch is yet to evolve. For example, there is little to no clarity on the experiments that the agency wants the astronauts to perform during the mission and whether or not it has developed the hardware required for it. Another critical area, the training of astronauts, remains untouched as of now. Integrating the systems it has developed, which remain short of attaining a fully operational status- — to make them work as one unit will be a humongous challenge for ISRO. The fact that it has little over two years to pull off this feat adds to the complexity of the most challenging mission the agency has ever attempted.

But contrary to what conspiracy theorists claim, the Prime Minister is unlikely to have declared a deadline for a mission as critical as this without discussing it with ISRO or his scientific advisers. Moreover, the most complex mission that ISRO has completed till date — the Mars Orbiter Mission — took 18 months from concept to flight. Therefore, there is little to suggest that ISRO is unprepared for the mission.

So, is ISRO up for Modi’s challenge? In all likelihood, yes.

In 2013, S Ramakrishnan, the then director of the Vikram Sarabhai Space Centre — a facility working on the human spaceflight mission — said it would take India 10 years to undertake human spaceflight. If ISRO launches the mission successfully in 2022 or before, it would finish the race ahead of time.

However, sending a man to the moon — the next logical step after a successful human spaceflight — remains a far cry. The US sent its first citizen into space in 1961. It took it eight years to follow this up with a landing on the moon. The Soviet Union, which sent the first man into space at the height of the Cold War, failed to achieve the feat. China, which became the third country in 2003 to put a man in space, is yet to send a human to the moon and plans to do so by 2036.

Moreover, when the US sent a man to the moon, the priority was not research; it was the need to beat the Soviet Union in the space race at a time when the latter had sent the first human to space and the future of America’s space programme appeared as bleak as the lunar surface. This is not the case for India, which has so far set modest targets for its low-cost space programme. Therefore, landing an Indian on the moon is unlikely to be an outsized priority for ISRO in the near future. A lot will depend on the success of Chandrayaan-2 — ISRO’s first mission which involves a soft-landing on the lunar surface and deploying a rover — in January 2019.