Why University Student Union Elections Need To Be Banned 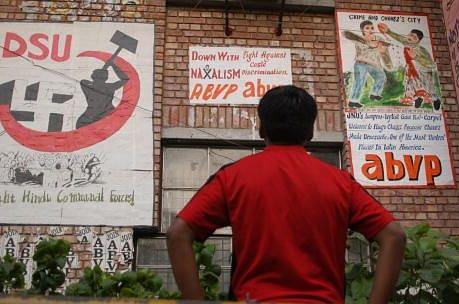 As we know through movies such as Gladiator, in ancient Rome, men were made to fight with beasts. There were sword fights and other gruesome blood sports that resulted in the death of the combatants. People loved these fights in spite of them being barbaric. Support for the sport was driven by baser instincts, but was hidden under the cloak of valour, honour, etc.

A similar modern-day exercise is carried out in the name of student union elections. Like the ones that happened in September – they are bloody too. No loss of life, thankfully. The reasons given in support of student body elections are democracy, participation etc, but the baser instincts behind them are thirst for combat at the expense of students’ lives, and recruitment of foot soldiers for political parties.

Recently, Ankiv Baisoya, the DUSU president, was fired by the ABVP for forging his degree. Then there are some like Kanhaiya Kumar, who overstay, postponing graduation by a few years and occupying hostel facilities just to be eligible to become president of the student body. The winners are feted and their victories act as a stepping stone to political careers. Hence, they indulge in devious acts early on to get ahead and to show off their skills in the dark art of politics. But, for the rest of the community that is bombarded with news about these elections, the question that lingers on is, “all of this to serve what end?”

Let us look at the promises in the manifesto of ABVP for DUSU elections: “to make girl students more self-confident we would organise self-defence training in various colleges and university campus”; “we would try for the provision of a police booth near every hostel/college and make sure that there are female police staffs present at every booth”. Other topics include: rationalising fee structure, improving hostel facilities, reforms in the admission process, affiliating every college to DUSU, gender sensitisation, improving transportation, etc. Does it require an exhausting and polarising election process for addressing these issues? Are they under the powers of the elected student body leader to execute?

Other student organisations had similar issues highlighted in their manifestos. If we remember the campaigns, all topics from Gurmeet Ram Rahim to Rohingyas to triple talaq to One-Rank-One-Pension found place in speeches of the aspirants. God knows how these are going to make the campus better.

The media hypes it and covers it as if these elections are the proxy for national elections. Based on its performance at JNUSU, many Left-sympathising newspapers such as The Hindu write paeans for the ideology. The positives of conducting student elections are minimal, such as “giving exposure to students on the democratic process” etc. Let us look at the negatives.

First, it stifles creative political thinking. Students are made partisans at a time when they begin to think about politics and society. Student politics produces an echo chamber and solidifies biases that become ingrained in them for the rest of their lives. An open and non-conforming campus set-up will foster original thinking and will bring forth creative solutions to problems facing society. Instead, the exact opposite is happening now. Once brainwashed, confirmation bias kicks in and it asks for a difficult and courageous soul-searching process later in life to rid the biases. This author believes that many ‘liberals’ remain obstinately dogmatic because of the early indoctrination and lack of courage to self-analyse later in life.

Second, more than ideas, campus politics creates enmity and ill feeling among students. Light is shone on what divides rather than what unites. It is easy to start thinking solely on caste and religious lines. Friendships are affected by the hooliganism and money power exhibited. For students who come from highly-stratified societies, such as Bihar, this could also lead to reinforcement of biases that they might have hoped to escape from.

Third, the focus of college life should be academics and constructive co-curricular activities (and self-discovery and having fun). Constant politicking, dharnas, and candle-light marches are major distractions to academic excellence and wholesome campus life. In the next decade and beyond, when only the very skilled will have the edge in their careers, it is silly even to contemplate allowing campus politics to have a role. The stark truth is, China (before the words communism, democracy, freedom etc, come raining on you) has a competitive advantage in this aspect.

Fourth, student elections are recruiting grounds for foot soldiers for major political parties. The lower-level party leaders play an active role in student politics, constantly manipulating and indoctrinating. They review the prachar-prasar and help organise the elections. These elections keep them in business. For them, students are just the head count that they need to organise big political rallies for leaders.

Fifth, faculty and administrators don’t remain mute spectators. Ideologically-driven professors use the opportunity to indoctrinate and further their own political ends. They deepen the ideological ecosystem. Participating in elections point to commitment to the cause and hence sympathetic wards are recruited to do research, pointed to funding opportunities etc. Student elections are beginning of the politicisation of the education system.

Sixth, none of the actual problems, such as better infrastructure, safety for girls, ‘love jihad’, pest control, hostel fees etc, actually needs a political process to be solved. These could be addressed by simple representations to dean of students or a special ombudsman appointed for student activities. These days, forums with up-voting facilities in the campus intranet are used widely in colleges to alert authorities.

Seventh, student politics is not a sine qua non for politics in general. It is undeniable that college politics have brought out political leaders such as Arun Jaitley, Ajay Maken, Sitaram Yechury among them, who have made it to the top. But none of India’s prime ministers, including Narendra Modi, have come up through student politics.

Colleges in Tamil Nadu have no student body election like that of JNU or DU. There has always been a healthy student life in universities. Problems are tended to through proper representation. The electoral politics of Tamil Nadu is as healthy as anywhere in India. Students from Tamil Nadu get involved in politics after finishing college and they seem to be doing perfectly fine.

All major political parties should make a principled call for banning student politics. For furthering their own selfish motives, they should not make pawns out of the lives of students. If anybody believes in a compassionate, thinking, scholarly and peaceful academic life for our future leaders, they should stand for dispensing with student politics.

The views are personal. The author welcomes counterpoints.