A Village Mentioned In Ancient Texts, Likely To Be 4,000 Years Old, Unearthed By BHU Team Near Varanasi 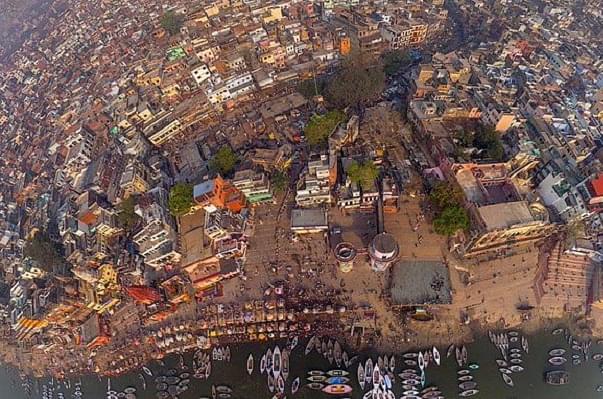 An aerial view of Varanasi.

A team of surveyors from the Benaras Hindu University has unearthed a 4,000-year-old urban settlement in a village 13 km from Varanasi.

The experts believe that it could have developed as a sub-centre of Varanasi. They have also found a temple dating back to the 5th Century AD - 8th Century AD, as per a PTI report carried by dailies.

Professor A K Dubey of the Department of Ancient Indian History, Culture and Archaeology, BHU, is quoted as saying that potteries which ‘are 4,000-years-old and walls which are 2,000-years-old’ were discovered.

He added that the discovery of the site was of significance because of its proximity to Varanasi and that it was possible that it grew as an urban town.

Going by the surface materials present at the site, the structure could be between 3,500 to 4,000-years-old as per the team. The 5-metre cultural deposit unearthed is said to be like the ones found in Sarnath.

Former Additional Director-General of the Archaeological Survey of India (ASI), B R Mani, was invited by BHU over the initial survey. This is not the first time a crafts village is being unearthed. Earlier, Sarnath, Tilmapur, Ramnagar and other areas, have revealed the presence of crafts villages. Babhaniyav is the latest addition.

“They have also found a pillar with a two-line text in Kushan Brahmi script, which makes the findings at least 3,500-4,000 years old,” he added.

According to Mani, the complete excavation will unravel a clear picture.