Always Unsafe? Video From 2017 Shows Wuhan Lab Scientists Admitting To Being Bitten By Bats While Using Little To No PPE 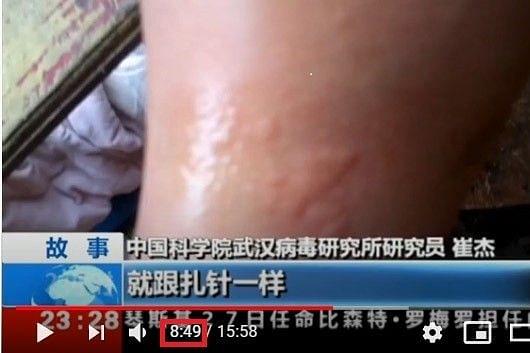 Screenshot from the video

A video from Chinese state-run TV reportedly showed that researchers from the controversial Wuhan Institute of Virology (WIV) were bitten by bats while they were handling the wild animals without using protective gear.

The video was first released on December 29, 2017—two years before the pandemic hit the world.

As reported by the Taiwan News, it was created to show the work to find the origin of SARS (Severe Acute Respiratory Syndrome) by the Chinese virologist Shi Zhengli and her team of scientists from the Wuhan lab.

The WIV researchers work inside a biosafety level 4 lab (BSL-4), which is the highest level of biosafety precautions.

But the alarming video showed that the scientists neglected proper safety measures while handling potentially infectious bats both in the wild and in the lab.

In the video, a scientist can be seen holding a bat with bare hands.

Some team members can be seen collecting potentially highly infectious faeces of bats while wearing short sleeves, with no noticeable personal protective equipment (PPE) other than gloves.

Even though some of the researchers can be seen wearing complete hazmat suits, several other people who were interacting with the team were in ordinary clothes and some with no head covering at all.

There was another person, most probably Shi, who is also known as “Bat Woman”.

In the video, she can be seen handing samples with her bare hands.

Somewhere in the middle of the video, when the narrator was talking about the risk of getting injured by a bat bite, a researcher, Cui Jie explained his experience of getting bitten.

He clearly said that a bat’s fangs went right through his gloves and he felt like “being jabbed with a needle”.

Even though Cui mentioned that he was wearing gloves, it left the part of the wrist unprotected.

However, an image was also shown in the video of a team member’s swelled limb after a bat bite.

Later on, the video explained the fact that bats can carry several viruses, including rabies, so, Shi’s team members got only the anti-rabies vaccine before each field sampling.

The bat virus researcher Shi said in an article, which was later scrubbed by China’s censor, that even though bats carry many viruses, the odds of directly infecting humans is “very small”, as reported by the news agency in Taiwan.

In addition, the expert also noted that the researchers take greater precautions while handling wild animals like bats, but "in most cases, only ordinary protection will be utilized".

According to the two-year-old video, not once but several times researchers were seen using inappropriate safety measure while handling bats.

This video, which was uploaded by a Chinese blogger last year but got deleted by the Chinese censor, is proof that at least two bat bite incidents occurred when the team was researching coronavirus carriers, bats.

The video comes at a time when many experts voiced their concerns over the Wuhan lab leak possibility and the United States President Joe Biden ordered to investigate it.

Meanwhile, reports said that the Wuhan lab scientist who was thought to be the Covid-19 “patient zero” is still missing and there are no conclusive details about the pandemic origin.

The investigation by the World Health Organization (WHO) to find the Covid-19 origin was jeopardized by the Chinese authority due to the lack of access given to the team.

The footage has once again raised several unanswered questions including the possibility that scientists became infected with a coronavirus that somehow led to the Covid-19 pandemic.

Considering the alarming visuals, the Taiwan News wrote that the investigators from WHO should ask Shi whether any of those two team members, bitten by bats, developed any symptoms of any illness and whether they were tested for coronaviruses, as well as antibodies for such viruses.

The inappropriate use of PPE in the lab has also triggered a question that whether the infection occurred inside such a controlled environment or a chimera virus was developed in gain of function experiments (GOF)—which result in an increase in the transmission or pathogenicity of potential pandemic pathogens.