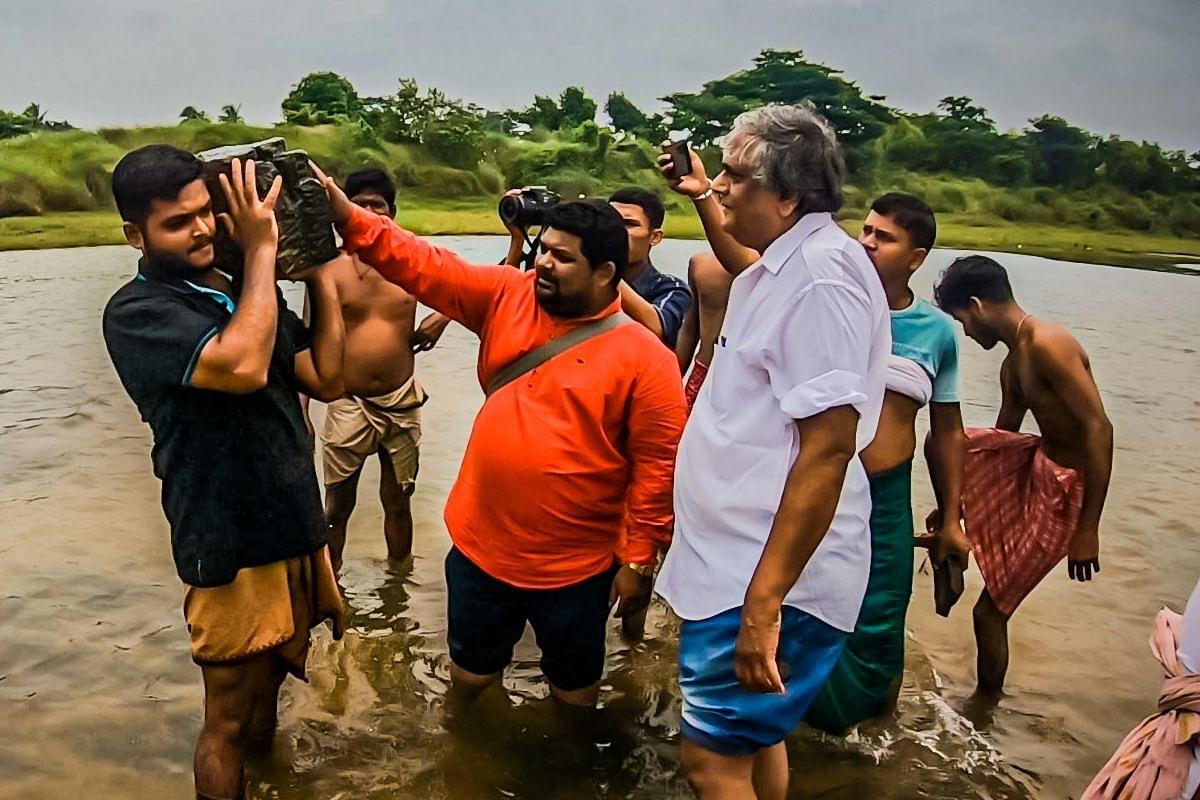 Artifacts being recovered from the river.

A four-member team of ‘Rediscover Lost Heritage’ has stumbled upon the possible ruins of an ancient temple near the mouth of the Bhargavi River in Balanga area of Puri district.

The group, which is currently listing the archaeological monuments of the Ratnachira River Valley, found the ruins in the middle of the river, just 1 kilometre upstream from the source of the Ratnachira.

According to the locals, many such large stone blocks were discovered in the previous years, which were moved up the steep bank and kept in the premises of the nearby Akhandalamani Temple.

The team found carved stone panels, broken images, pillars, door jambs and a multitude of minor broken artifacts. Some of the carved stone panels have been affixed on the sides of the existing temple, which was built about a century ago.

According to Nayak, the ruins of the ancient temple are scattered, both on the river bed and the surrounding areas. Many of these blocks have also been carted away by the villagers for construction.

A stairway from the river bed to the steep bank has around two dozen of these carved ancient temple blocks.

"We came across an intricately carved lintel section of a broken door jamb. The central figure is a beautiful image of Goddess Gajalaxmi. Nagakanya images were seen in many carved stone blocks, besides a lot of fine filigree work of the older temple. The older temple may date back to thirteenth/fourteenth centuries CE or earlier, considering the iconography of the antiquities," Nayak said.

The team discovered that there was a large cluster of blocks in the middle of the river which appears to be the foundation of the ancient temple. There are hundreds of huge sunken stone slabs, which were possibly once used in the temple’s construction.

According to Dhir, who led the survey team, “considering the bulky size of the stone slabs one can imagine it was not a small temple but a mid-sized or bigger temple. Some of the stone slabs documented on the bank were 8 feet long and 2-4 feet in breadth and weigh between 1.5 to 2 tonnes.”

Both sandstone and laterite stone slabs were discovered. The slabs have consistent and identical holes on both their sides, suggesting the use of iron clamping. As the sheer weight of the blocks makes it impossible to remove them from the sand and mud, they have been in place for centuries. Many were damaged and ruined by machinery used for sand mining.

Many idols which were discovered over the years have been placed in different temples in the nearby villages. The locals also showed the team many coins, potsherds and small ornaments which are frequently found in the vicinity. A more detailed study is needed by experts to determine the antiquity of the temple. It is certain that the temple crumbled due to the change of course of the Bhargavi River.

According to Dhir, like the Prachi Valley, the Ratnachira Valley too is a treasure house of many archaeological wonders, most of them being obscure and unknown as they have not been documented. Like the Prachi, the mythical Ratnachira too is on its death throes.

Once a navigable river, it is today a weed choked stream which only flows during the monsoons. Legend has it that Lord Rama had drawn the river to quench Sita’s thirst, using her pearl ring to chart its course. The ancient river, which now runs dry for most of the year, has many myths and legends with flourishing heritage on both sides of its short stretch.

Dhir has appealed to the authorities to conduct a proper survey of this region between Ratnachira and Bhargavi rivers. Earlier, the team had discovered an early stone temple in Biro Purusottampur village and a cache of 22 ancient idols in Laudanki village.

A proper survey of the 60-km Ratnachira Valley should be undertaken by the state archaeology department and the monuments documented.