As Diya Makers Face Big Threat From Chinese Lights, Here’s How Common Citizens Are Coming To Their Rescue 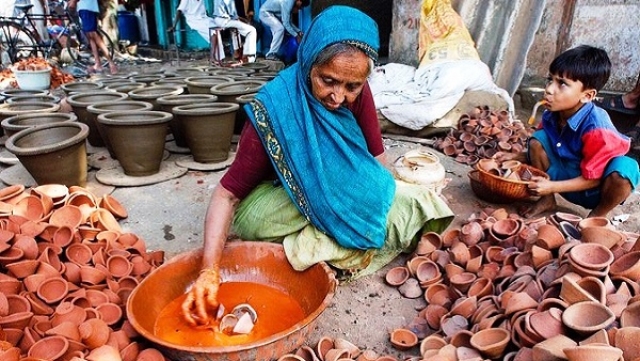 Diwali - the festival of lights, one of the most important occasions in Hinduism will be celebrated on 27 October.

Celebrated to symbolise light over darkness, every Diwali countless of homes in India and abroad are illuminated using traditional diyas and in the modern age - electronic lights.

Traditional diya making in India has always largely been a small scale handicraft industry spearheaded by traditional artisans. These artisans, frequently accompanied by their families to sell their modestly priced diyas is a frequent sight on streets leading up to Diwali.

Their traditional occupation encompassing generations though is under threat from cheap Chinese made electronic lights which are eating into their livelihood.

“The Times They Are a-Changin..” for these traditional diya makers as the predominantly Made in China electronic lights are growing in dominance.

As per various reports, some potters are feeling the pinch of cheap and fancy Chinese lights flooding the market. They claim that the dazzling lights combined with their ability to shine 24x7 is proving to be an attractive proposition for Diwali shoppers.

Reports from Assam’s Dhubri claim that some artisans are facing an existential threat and claim that sales from earthen diyas now fail to sustain their livelihood.

Incidentally, such predatory threats from Chinese products for India’s traditional artisans are nothing new and reports from the past few years have been highlighting this problem.

For example in 2016 it was reported that sales of the traditional diyas had fallen by 50 per cent in Meerut thanks to ready-made plastic diyas from China. This highlighted the point that not just Chinese lights but “Made in China” plastic diyas too were posing to be a problem.

Common Citizen Coming To Their Rescue

The plight of these diya makers though has not gone unnoticed and common citizens have taken up the initiative to promote their art.

Recently a campaign called #PottersKiDiwali went viral on social media urging people to give patronage to the humble diya sellers.

Conceptualised by social media activists, this awareness mission involved common citizens contacting their local pottery makers to offer their support and in the process urging others to do the same.

“This Diwali bring some light to potters’ homes too, Buy Diyas from the potters and not Chinese lights”, said posters put up in various parts of the country.

The campaign soon picked up with various civil servants too urging common citizens to buy from local diya makes so that they too would be able to celebrate Diwali at their homes. The campaigners also urged people not to bargain with the diya sellers.

The response by Diwali shoppers has also percolated down to the market. Just today (23 October) it has been reported that earthen lamps are seeing a high demand in Patna.

Traders state that while the diyas were seeing a sales dip few years ago, they have now made a comeback and attribute it to shoppers becoming more environmentally conscious.

Even in West Bengal’s Siliguri, potters have reported a spike in demand. They claim that while the demand has been high throughout the year, it has further picked up pace this Diwali.

“Earlier Chinese lights had caused a slowdown in the demand of earthen lamps but the traditional ways are making a comeback. The demand for earthen lamps is very good this year”, one potter was quoted as saying.

One potter also made a statement that he is unable to fulfil the demand for this year.