As Rahul Gandhi Rakes Up The Issue Of Chinese Bridge Over Pangong Lake Again, Here Are The Facts You Should Know 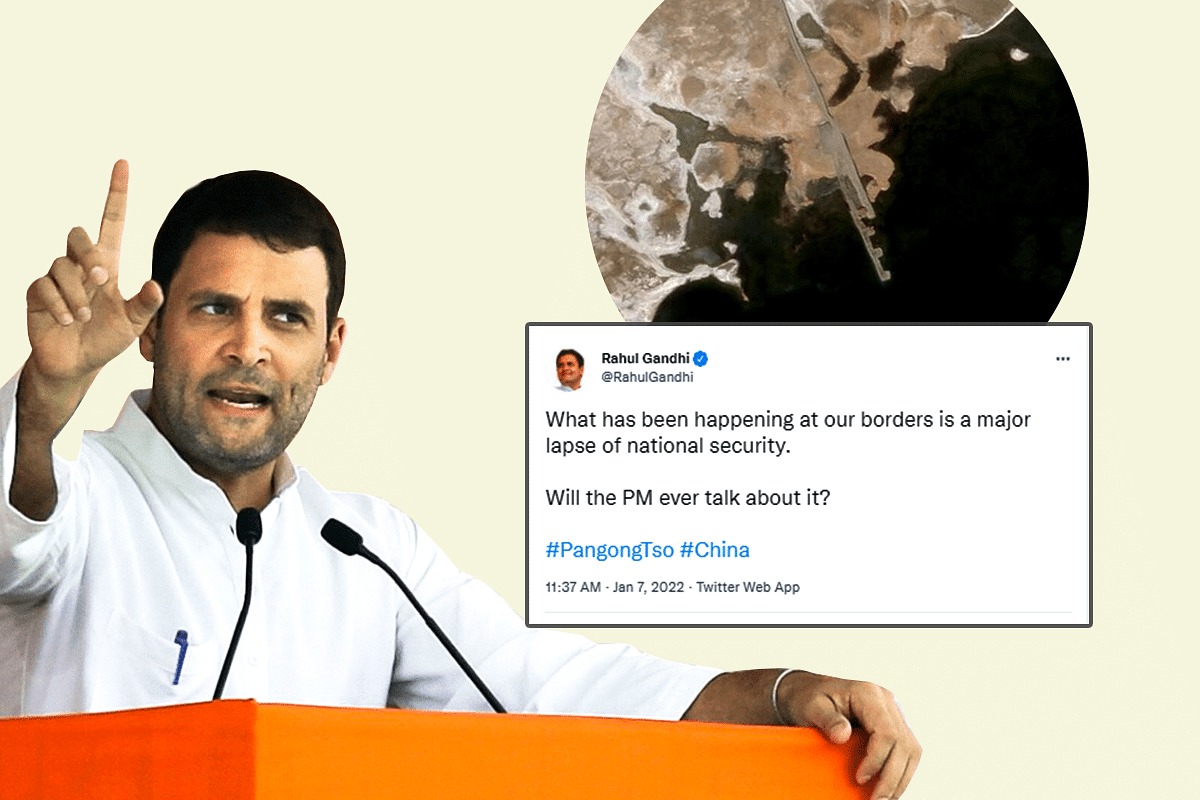 Congress party's two-time prime ministerial candidate, Rahul Gandhi, is currently enjoying a vacation outside the country. However, that hasn't stopped him from weighing in on the most contentious issue of the day — the breach in Prime Minister Narendra Modi's security during his visit to Congress-ruled Punjab earlier this week.

Far from expressing concern over the breach in security of the highest executive office of the country, Gandhi has responded to the Bharatiya Janata Party's allegations against the Congress government in Punjab with a jibe.

In an apparent taunt to the government, the Congress leader has raked up the issue of the construction of a bridge by China over the Pangong Lake in eastern Ladakh, calling it a "major lapse of national security".

"What has been happening at our borders is a major lapse of national security. Will the PM ever talk about it?" the Congress leader said on Twitter, adding the hashtags "#PangongTso and #China".

The news of the construction of the bridge over Pangong Tso made national headlines on Monday (3 January). The Ministry of External Affairs addressed the issue at its weekly presser on Thursday (6 January).

As Swarajya had reported on 3 January, China's bridge over the Pangong Lake is coming up in an area called Khurnak (also known as Ote Plain) that has been under Chinese occupation at least since 1958.

In a note verbale handed to the Chinese counsellor in India on 2 July 1958, the Ministry of External Affairs had noted that "troops of the Government of the People's Republic of China crossed into Indian territory and visited the Khurnak Fort (Longitude 79°- 00 E and latitude 33°-47'N) which lies within the Indian frontiers of the Ladakh region... and occupied it."

In the same note, India also conveyed its "advance intimation of the intention...to send a reconnaissance party to the Khurnak Fort...to the Chinese Government."

Over a year later, in an annexure to the letter from the then prime minister Jawaharlal Nehru to the prime minister of China dated 26 September 1959, India again "protested against the Chinese occupation of Khurnak Fort", noting that the area was "about 1.5 miles within the Indian frontier".

"This fort has from time immemorial been within Ladakh, and has never been the subject of dispute. Even at a conference on certain pasture grounds in this area, attended by the representatives of Tibet and Kashmir and a British Commissioner in 1924, the jurisdiction of India over this fort was not disputed. However, there has been no reply as yet to the note of the Government of India," the Indian note said.

The statement of the Ministry of External Affairs also noted that the bridge is coming up in an area that has remained under Chinese occupation for decades.

"The government has been monitoring this activity closely. This bridge is being constructed in areas that have been under the illegal occupation by China for around 60 years now. As you are well aware, India has never accepted such illegal occupation," the MEA spokesperson said.

"Separately, the government has taken all necessary steps to ensure that our security interests are fully protected. As part of these efforts, the government has also, during the last seven years, increased significantly the budget for the development of border infrastructure and completed more roads and bridges than ever before. These have provided much needed connectivity to the local population as well as logistical support to the armed forces," he added.

China is building the bridge very close to what New Delhi considers to be the border between India and Tibet. However, the place is around 25 kilometres from where India perceives the Line of Actual Control to be.

After occupying the Khurnak Fort area in 1958, China expanded its control to the Sirijap Complex, further west of the Khurnak Fort, during the 1962 war. During the war, the Indian Army had posts at Sirijap while the Chinese forces had a base near Khurnak Fort. The 'Fingers' area, occupied by Chinese forces in May 2020, leading to the standoff that continues at some places in eastern Ladakh, is further west of the Sirijap Complex.

North of the Pangong Lake lies the Chang Chenmo range. Spurs that jut out from this range, running mostly perpendicular towards the northern bank of the Pangong Lake, are called 'fingers' by the Indian Army. These fingers are labelled 1 to 8 in the map above.