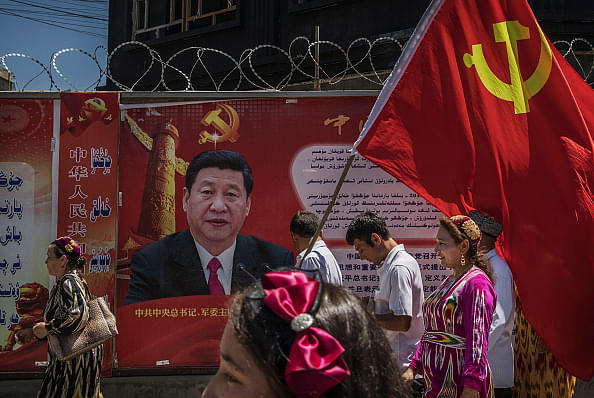 An Australian think tank has once again nailed China's lies on the human rights violations being committed in the Xinjiang Uyghur Autonomous Region (XUAR) by releasing a comprehensive data, including latest satellite imagery, of more than 380 detention facilities still operating in the country's far west.

The Australian Strategic Policy Institute (ASPI) released the first of its two-part study, ‘The Xinjiang Data Project,’ today which has extensively mapped Xinjiang’s detention system with 380 sites of ‘re-education’ camps, detention centres and high-security prisons that have been built or expanded since 2017. ASPI researchers believe that this is the largest database of Xinjiang’s detention facilities in existence with the findings of the research contradicting Chinese officials’ claims that all “trainees” from so-called vocational training centres had “graduated” by late 2019.

The detailed research suggests that many extrajudicial detainees in Xinjiang’s vast “re-education” network are now being formally charged and locked up in higher security facilities, including newly built or expanded prisons, or sent to walled factory compounds for coerced labor assignments.

“We present satellite imagery evidence that shows newly constructed detention facilities, along with extensions to several existing facilities, that occurred across 2019 and 2020. At least 61 detention sites have seen new construction and expansion work between July 2019 and July 2020. This includes at least 14 facilities still under construction in 2020, according to the latest satellite imagery available. Of these, about 50 per cent are higher security facilities, which may suggest a shift in usage from the lower-security, ‘re-education centres’ toward higher-security prison-style facilities,” said researcher Nathan Ruser.

ASPI has put the precise coordinates and images for all 380 sites in an interactive map for public view online.

The researcher’s efforts to find as many of the detention facilities in Xinjiang as possible has spanned over two years and involved eyewitness accounts, media reports, scouring satellite images and official construction tender documents.

“One of the most effective methods was the examination of night-time satellite imagery from Xinjiang. Because the vast majority of the camps that we located were built on previously unused land in remote or peri-urban areas, it was possible to compare illuminated areas in the first few months of 2017 — before most of those camps had been constructed — with presently illuminated areas. The new areas of night-time light emissions were cross-referenced against high-resolution daytime satellite imagery that showed much greater detail. We discovered that many of the newly illuminated areas in these parts of Xinjiang were either newly constructed detention facilities or significant new highway checkpoints used to monitor the movement of people across Xinjiang,” says Ruser.

Human rights organisations believe that the Chinese government has detained over a million Uyghurs, ethnic Kazakhs and people from other Turkic Muslim nationalities in these camps over the last three years. Not just that, the minority community, which practices a moderate form of Sufi Islam and leads predominantly secular lives, has seen massive destruction of its places of worship.

China, however, claims that these camps in Xinjiang are nothing but vocational education and training centres established to teach skills in accordance with the law as the province faced a severe situation of frequent violent and terrorist activities.

“Foreign media reports claiming that there were up to one million or even two million trainees at the centres are purely fabricated and totally groundless,” China’s official state-run press agency Xinhua quoted Shohrat Zakir, chairman of the regional government, as saying last December after the ‘graduation ceremony’ of the trainees.

Just like the rest of its propaganda, China failed miserably here too.

Last month, the United States, Britain and Germany had slammed the Xi Jinping regime at a United Nations Security Council (UNSC) meeting for gross human rights abuses being committed against ethnic Uyghurs and other Muslim minorities in the province.

The United Nations’ independent experts have also repeatedly communicated with the Chinese government their alarm regarding the repression of fundamental freedoms in China-from the collective repression of the population, especially religious and ethnic minorities, in Xinjiang and Tibet, to the detention of lawyers and prosecution and disappearances of human rights defenders across the country, allegations of forced labor in various sectors of the formal and the informal economy, as well as arbitrary interferences with the right to privacy, to cybersecurity laws that authorise censorship and the broadly worrying anti-terrorism and sedition laws applicable in Hong Kong.

“The world has known about the Chinese Communist Party’s gross and systematic abuses of human rights for decades, but too often turned a blind eye. The PRC’s human rights record is deplorable, and its efforts to disguise that record must be countered with more transparency, more discussion, and more truth, as the UN’s founders envisioned. The Trump administration will continue to lead those efforts, and will take every opportunity to give voice to those in Xinjiang, Tibet, Hong Kong, and elsewhere who are prevented from using theirs,” Kelly Craft, the US Permanent Representative to the UN had said a couple of months ago.

In spite of the huge criticism, protests and warnings from all corners of the globe, Xi remains defiant. As IndiaNarrative.com had reported yesterday, China is now pursuing a Xinjiang-style system of forced labor in Tibet, a region which, though suffering from suppression, until now has not been subjected to such atrocities.

The satellite imageries, the investigations, the reports of special rapporteurs, have all been brushed aside by the country which rubbishes expansionist remarks and claims being “a builder of global peace, a contributor to global development and a defender of international order”.