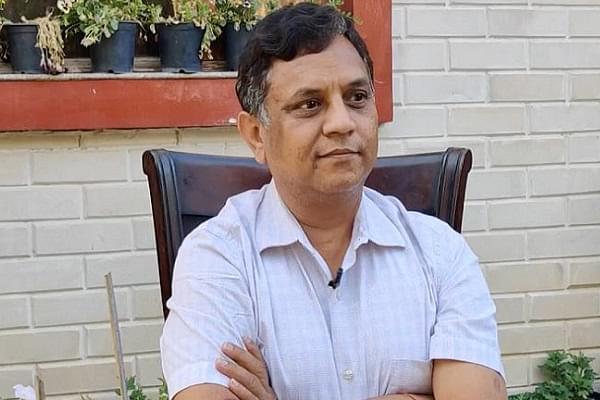 Bombs have been hurled at the home of scientist and BJP's Purbasthali Uttar candidate Dr Gobardhan Das's home in West Bengal by alleged TMC workers. The mobs have also attacked various party workers in his village.

Author and scientist Dr Anand Ranganathan made a SOS call to Home Minister Amit Shah, imploring him to ensure Das's safety. He said that Das is trapped inside his hope along with his family members including the elderly as TMC hordes hurl bombs.

SOS @AmitShah. Just managed to get through to @dasgobardhan dada, BJP candidate from Purbasthali Uttar. TMC hordes have attacked BJP volunteers' homes in his village. He is trapped inside his home with his family and elders. They are hurling countrymade bombs at his home. Help.

Dr Ranganathan has informed that the Home Minister's officer has assured him that CRPF forces are reaching Das' village and are in contact with him.

Gobardhan Das, a renowned molecular scientist, works at the Jawaharlal Nehru University’s (JNU’s) Special Centre for Molecular Medicine. He was fielded by the BJP to contest from the Purbasthali Uttar seat in Bengal’s Purba Burdwan district.

Gobardhan Das is an accomplished scientist having an experience of over 19 years in the field of medicine and science. He has done his PhD from the Institute of Microbial Technology, India in 1997. His thesis for his PhD was on immunological basis of susceptibility and resistance in animal models of tuberculosis.

BJP workers have been at the receiving end of major political violence in Bengal, perpetrated by alleged TMC goons. This has resulted in the deaths of at least six BJP workers, injuries to many more and a substantial damage to the workers' properties and BJP party offices. The BJP has also alleged that two of its women poll officials were gang-raped in Birbhum.

As per the BJP state media cell, BJP's Mandal president in Harighata and BJP Leader Saumitra Ata have been attacked by TMC goons. A 101 year old grandmother of a BJP functionary has also been assaulted. A resort of one of the workers, situated near Shanti Niketan has been vandalised. He has been forced to flee the state along with his family.