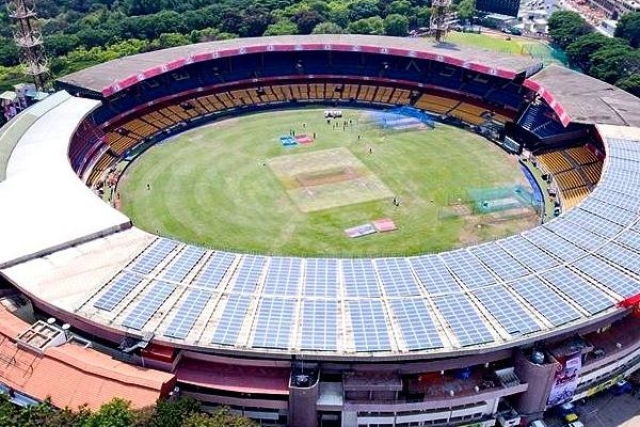 After the Bengaluru International Exhibition Centre was transformed into a Covid-19 care centre that will accommodate 10,000 beds, the government today announced that the Chinnaswamy cricket stadium and the Bangalore palace grounds will also be used to add more beds as number of cases in the city continue to rise.

“In the last 18952 tests have been conducted in the last 24 hours, with which our total test numbers have reached 7,59,181 today” said Dr K Sudhakar, addressing media through an FB live today.

Chief Minister B S Yediyurappa today visited the BIEC and inspected the arrangements at the covid care centre. “Only asymptomatic patients will be admitted here. We will need 600 doctors and 1000 nurses to man this centre apart form other staff, BBMP marshalls and other who will be appointed here.” said Sudhakar, assuring citizens of Bengaluru that there was “need to fear”.

“Measures are being put in place to provide for entertainment, yoga and other indoor sports at the centre. 20 ambulances will also be stationed there for emergency,” he added.

“30,000 of the 1 lakh antigen kits that we have procured will be reserved for Bengaluru and the rest will be distributed to other districts that have high number of covid cases,” he added.

Earlier today the government also announced the division of Bengaluru into eight zones whose handling will be monitored by eight senior IAS officers who will function as zonal supervisors.

“Eight ministers have been appointed by Chief Minister BS Yediyurappa who have been entrusted with the responsibility of this zonal monitoring of the capital which will also involve a task force from the booth level,” said Sudhakar.

The city will also be marked into colour coded zones based on the numbers. "The city will be divided into red, orange and yellow zones in commensurate with the number of Covid-19 cases in them for containing the virus spread on war footing,"said Law and Parliamentary Affairs Minister J C Madhuswamy, as reported.