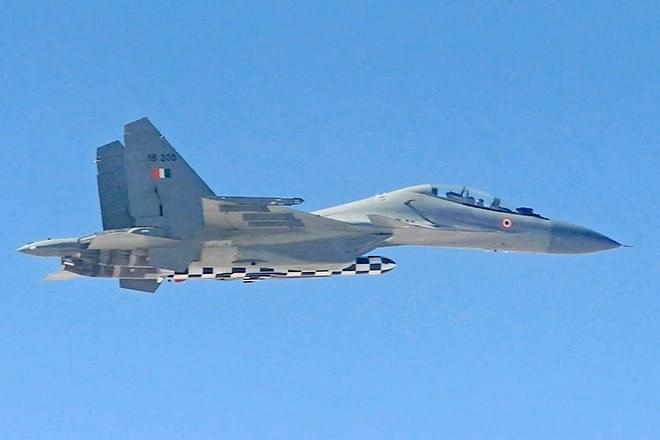 In a first, Su-30MKIs of the Indian Air Force (IAF), armed with BrahMos supersonic cruise missiles, took part in the ongoing naval exercise with the United States taking place in the Indian Ocean, a report in the Times of India says.

The exercise gave the BrahMos-armed Su-30MKI fighters, based at the Thanjavur Air Base in Tamil Nadu, an opportunity to practice maritime strike.

The deployment of BrahMos-armed Su-30MIKs at Thanjavur has given India the option of hitting enemy targets deep in the Indian Ocean. Taking off from Thanjavur, a Su-30MKI, equipped with an air-launched BrahMos, can go right up to the Malacca Strait, a narrow maritime chokepoint between Malaysia and Singapore, that links the Indian with the Pacific Ocean and the South China Sea.

This can prove to be a headache for China —accentuate its ‘Malacca Dilemma' — if the conflict unfolding in the Himalayas escalates and expands to the maritime domain. A large part of China’s trade, including nearly 80 per cent of its oil supplies, passes through this narrow 500 nautical-mile-long waterway.

The fighters can also hit targets in the Southern and Western Indian Ocean.

BrahMos-armed Su-30 MKIs can strike targets in China and Pakistan from standoff distances and from within the Indian airspace in some cases.

The participation of this package in a military exercise with the US suggests that it has proven its lethality and is fully operational. It is also a message to China, which has been increasing its presence in the Indian Ocean.

The naval exercise comes just weeks after the first leadership-level meeting of the Quad on 12 March, in which Prime Minister Narendra Modi, US President Joe Biden, Australian Prime Minister Scott Morrison and Japanese Prime Minister Yoshihide Suga had participated. US Secretary of Defense Lloyd Austin was in New Delhi between 19 and 21 March and held talks with National Security Advisor Ajit Doval and External Affairs Minister S Jaishankar, among others.

In April, Australia and Japan will also join the exercise, completing the Quad. France will also participate, making the exercise a ‘Quad plus’ engagement.