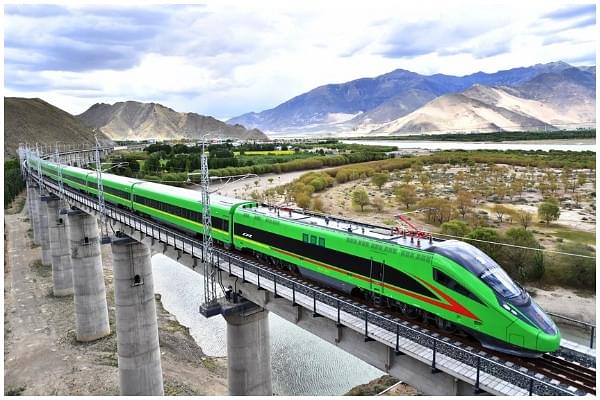 China's newly-opened rail line, which runs close to India's boundary with Tibet in Arunachal Pradesh, has been used by China to transport People's Liberation Army (PLA) troops for the first time.

The 435-kilometre rail line connects Tibet's capital Lhasa with Nyingchi, a town located only a few kilometres away from the border.

The railway line has been used to transport new recruits of a combined arms brigade of the PLA's Western Theatre Command "to an exercise field at an elevation of 4,500 metres", js7tv, a website affiliated with China's military, reported on Wednesday (4 August), without giving more details.

The development comes only days after Chinese President Xi Jinping took a train ride on this line from Nyingchi to Lhasa. During his visit to Tibet — first by a Chinese president in nearly 30 years, Xi had also inspected the construction of the rail line in this ecologically fragile area.

(Read: Tibet: Xi Jinping Tours Border Areas Close To Arunachal Before His First Visit To Lhasa Eight Years After Taking Over As President)

"Xi went to Nyingchi railway station, learning about the designing of the Sichuan-Tibet Railway and the operation of Lhasa-Nyingchi section, and then took a train to regional capital Lhasa. He inspected the construction along the railway during the ride," a report in the China Daily said.

Opened on 25 June this year, the Lhasa-Nyingchi rail line is part of the 1,600-kilometre long Sichuan-Tibet Railway project that will link Lhasa with Chengdu, the provincial capital of Sichuan.

The headquarters of China’s Western Theatre Command, which is responsible for the frontier with India, is located in Chengdu.

The use of the rail line for transportation of troops should not come as a surprise because the Chinese Communist Party (CCP) apparat has pointed out in the past that it will act as a “fast track” for the “delivery of strategic materials" to Tibet "if a scenario of a crisis happens at the border".

The project has received consistent attention from the top echelons of the CCP in the past, including Xi himself, who linked it to ‘border stability’ as recently as November 2020, during the standoff with India in Ladakh.

The construction of the rail line will not only ease the movement of troops within China’s Western Theatre Command but also enable the PLA to bring trainloads of troops and equipment from other theatres in a very short time, a scenario that can’t be ruled out after China’s massive mobilisation along the Line of Actual Control in eastern Ladakh in 2020.

Xi's inspection of the project, in the middle of a tense border standoff with India, has brought the focus back on this aspect of infrastructure development in Tibet.

Construction of the Lhasa-Nyingchi line, 75 per cent of which is either over bridges or in tunnels, began in 2015. Track laying was completed over five years, in December 202, at the cost of $4.8 billion. The 52nd and 53rd Mountain Infantry Brigades of the PLA are based in the Nyingchi Prefecture.

The line between Chengdu and Yaan was finished in December 2018. The remaining 1,100-km long section of the Sichuan-Tibet Railway between Ya’an and Nyingchi is expected to be ready by 2030.