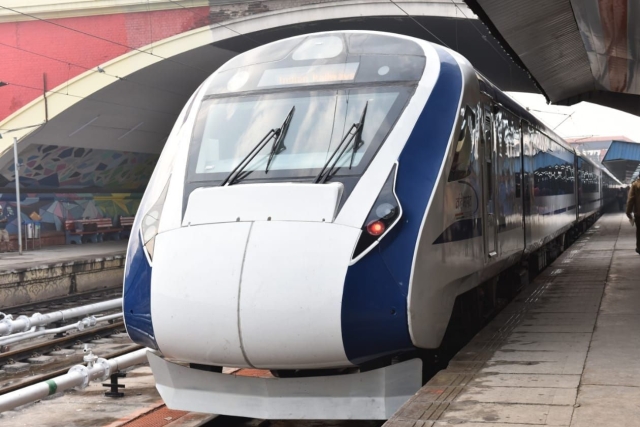 Three companies including a Chinese in partnership with an Indian unit have filed tenders for a Rs 1,800 crore Vande Bharat contract.

Medha, BHEL and CRRC-Pioneer Electric India have emerged as only players which have participated in the project as the technical bid for manufacturing 44 semi-high speed Vande Bharat trainsets, comprising 16 coaches each, opened on 17 November.

While the BHEL is a PSU and Medha is a domestic player, the third company CRRC is a Chinese entity, which has tied up with an Indian unit to bid for making 44 rakes of Vande Bharat indigenously.

Since there are only three players in the race, the railway tender committee would decide on whether to allow reverse bidding or not, said a senior Railway Ministry official.

Besides, the railways would also decide on the eligibility of the Chinese joint venture company to bid for the project.

According to railways, this is an indigenous tender with stipulation of minimum local content of 75 per cent. The eligibility for a bidder from a country which shares a land border with India to participate in the tender shall be as per public procurement orders of the Ministry of Finance.

Any company, whether stand alone or JV, if not eligible as per the norms of indigenous tenders will be automatically eliminated.

In the aftermath of border tensions with China, India has been considering a series of measures to restrict Chinese investments in Indian projects, and promote domestic companies instead.

Earlier, six companies including CRRC had participated in the Vande Bharat tender that was floated in December last year by the Integral Coach Factory at Chennai.

However, the tender was scrapped in July as it was found during the scrutiny that some bidders had furnished information that indicated financial information as well. Since price quotation was not needed at the qualification stage, Indian Railways decided to cancel the tender maintaining transparency in the bidding process.

A fresh tender for the project was floated after that as per the revised public procurement order with preference on ‘Make in India’ initiative.

However, with revised specifications and the Railway Board taking over the responsibility of floating the contract, the fresh tender has failed to attract many players.