Christian Asia Bibi Seeks Political Asylum In France For Her And Family, After Escaping ‘Death-For-Blasphemy’ In Pakistan 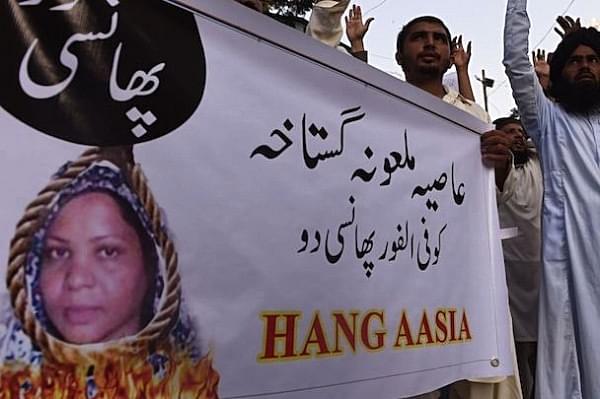 After spending years in a prison in Pakistan, Asia Bibi, the Pakistani Christian woman who in 2010 was convicted for blasphemy, said she was seeking political asylum in France, reports NDTV.

On an interview with RTL radio, Bibi said, “My great desire is to live in France.” This is Bibi's first trip to France since she left Pakistan for Canada with her family in 2018.

Only a few weeks ago her book, Finally Free was published in French, titled Enfin Libre! with an English version due in September.

“France is the country where I received my new life... Anne-Isabelle is an angel for me,” referring to the French journalist Anne-Isabelle Tollet, who led a long and relentless campaign for her release and also co-wrote Bibi's book.

Paris Mayor Anne Hidalgo bestowed an honorary citizenship certificate that was granted to Bibi by the city in 2014 when she was still behind bars.

In her book, Bibi recounts the horrible time she had to endure in prison where she was subjected to acts of cruelty.

When she was released in 2018, there were riots in the Sunni-Muslim-majority Pakistan, where, experts say, Christians and other minorities face persecution by hardline Islamists with the direct or indirect support of the state. The violent protest was led by militant cleric, Khadim Hussain Rizvi.

“Even with my freedom, the climate (for Christians) does not seemed to have changed and Christians can expect all kinds of reprisals,” she said.

Bibi is now living in Canada with her family in an undisclosed location under police protection and she said, “Obviously, I am enormously grateful to Canada.”

For Bibi, her ordeal started in 2009, when she argued with a Muslim woman who went and complained to the local cleric and accused her of blasphemy against Prophet Mohammed. The argument was over water which the Muslim field labourers refused to share because she was Christian.

She had vehemently denied the charges against her but was arrested. In jail, she was put in solitary confinement due to the possibility that she would be killed by other inmates.

Even in Canada, reports say, she is under constant threat of violent reprisal.

In a disturbing video doing the rounds on Twitter, a Pakistani national claims to have reached Canada to carry out the murder of Asia Bibi.

The footage shows the man claiming that Bibi would be asked to repeat her blasphemous words while receiving an award in Canada. Watch the video below:

A Pakistani religious fanatic claims that he has reached Canada to murder Aasia Bibi, the Christian woman who was falsely accused of blasphemy & acquitted by the top court. Aasia Bibi's safety must be ensured pic.twitter.com/xJ7laNBEEg

“To stop her from doing this, and to give her a terrible death, and for sending her to hell, even I arrived in Canada last night,” says the speaker.

In Pakistan, observers say, the blasphemy laws are used against minorities with impunity. In the past, members of minority communities have been lynched for allegedly making blasphemous comments.

Under the Pakistan penal code, blasphemy is punishable by death or life imprisonment. The law has been widely criticised by international human rights groups.

Two high-profile politicians who came to Bibi’s support were murdered by Islamic fundamentalists. Serving as the governor of Punjab province at the time, Salman Taseer was shot dead by one of his guards in 2011.

Mashal Khan, a journalism student, was lynched to death at the Abdul Wali Khan University in Pakistan’s Mardan in 2017 over allegations writing blasphemous posts.

Asia Bibi has hinted that in such an atmosphere, she may never be able to return to Pakistan. She said, “My heart broke when I had to leave without saying goodbye to my father or other members of the family. Pakistan is my country. I love my country but I am in exile forever,” she has been quoted as saying.