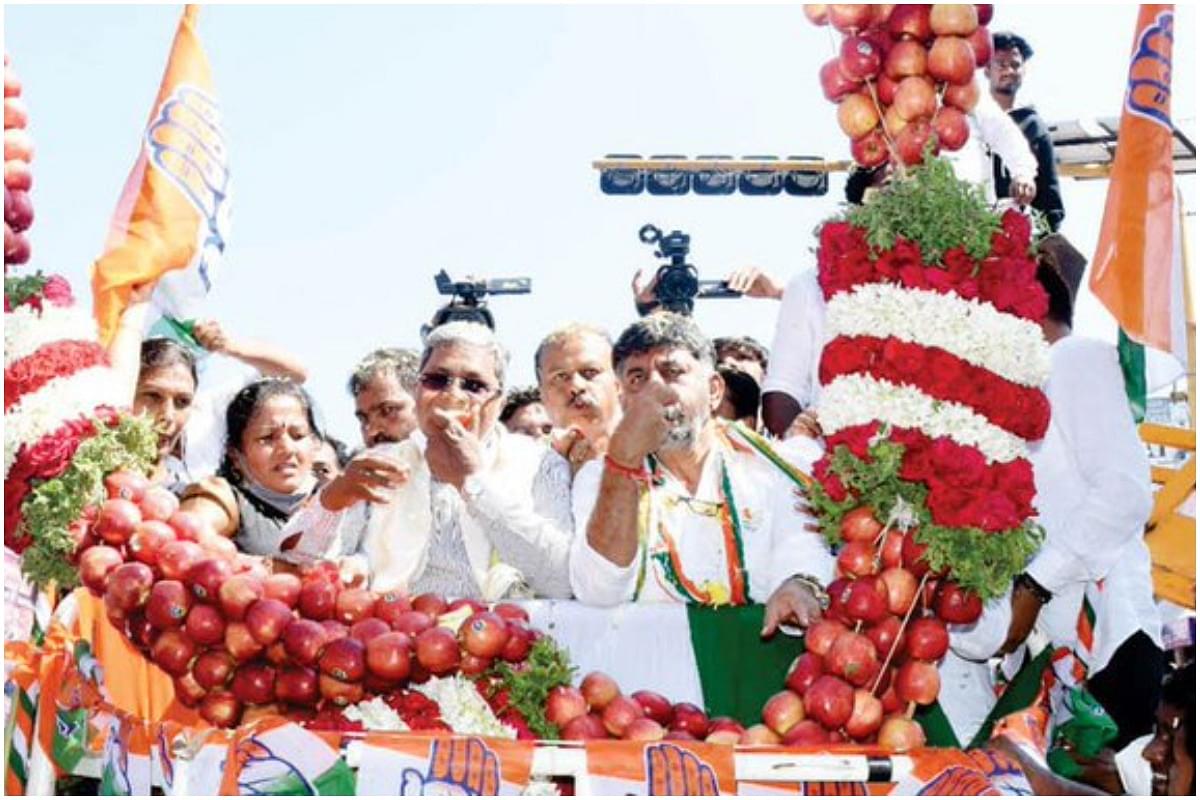 Congress leaders at the Mekedatu rally

“Mr ADC, I am fit, fine. You can't compel me. I know the law of this land. You tell your home minister I am perfect. They may be having some health issues — your health minister, home minister or chief minister. I will not give any test, nor do I need to. I have walked 15 km today. Have I stumbled?” asked Karnataka Pradesh Congress Committee President D K Shivakumar, rudely refusing to cooperate with health officials who landed at his hometown.

This was after having conducted a 16.5-kilometre long rally on day one of its 10 day ‘Mekedaatu padayatra’.

On a day that the state reported an unprecedented surge in Covid cases, with Bengaluru alone seeing 9,000 cases, D K Shivakumar and Congress Legislature Party leader and former CM Siddaramaiah kickstarted the rally at the sangama of the rivers Kaveri and Arkavathi.

Shivakumar was seen taking a dip in the river and offering prayers in an uncanny resemblance to the dip by PM Narendra Modi at Varanasi on the occasion of the inauguration of the Kashi corridor project.

Certain portions of the video, where he was seen flinging his vest into the river, or stumbling upon a rock as he made his way towards it, were circulated by social media handles, mocking Shivakumar.

With seers and priests in attendance, the two top leaders of the Congress jointly launched the march beating a large drum and pouring the river water onto a few potted plants.

Midday though, Siddaramaiah was said to have complained of ill-health and returned to Bengaluru, where he is a said to be recuperating.

Shivakumar ended day one of the rally at his hometown in Doddaalahalli, where he was met by the district health officials whom he reprimanded.

The rally was launched on Sunday, while the entire state stayed home bound with the weekend curfew in place, which will continue for 10 days, tracing around 16-17 kms per day.

The rally will involve starting from Mekedatu, halting at Doddalahalli on day 1, reaching Kanakapura on Day 2, Chukkenahalli on day 3, Ramanagara on day 4, Bidadi on day 5, Kengeri on day 6, and entering Bengaluru city on day 7.

It will then move through silicon city via Koramangala on day 8, Banasavadi on Day 9 and reach Gayatri Vihar, Police grounds on day 10.

On day 11 i.e on 19 January, the rally will move from Palace grounds through Race Course Road to reach National College Grounds in Basavanagudi.

While the government had warned against the conduct of the rally, Congress leaders called the Covid regulations an attempt to stop the party from holding the rally, with Shivakumar even seen denying the existence of the virus in some videos.

Home Minister Araga Jnanendra today questioned the intention of the Congress, which has till date never raised the question in the house as it sits in the opposition, nor worked out a DPR while it was in power, but is now throwing caution to the wind and putting people’s lives in danger by conducting this rally.

“There has been no mask, no social distancing. Even when our officials went to check on his health, he admonished them and sent them back,” added Jnanendra, as he spoke to mediapersons.

An FIR has been filed against 30 leaders of the Congress including Shivakumar, Siddaramaiah, Mallikarjun Kharge, and Ramalinga Reddy among others. This was also questioned by Shivakumar, who called it an attempt to put the leaders behind bars and challenged the government to file an FIR against all those who participated in the rally volunteering to ‘provide video evidence’ himself.

All the bigwigs of the party though were not to be seen on day 2 with Siddaramaiah having dropped off mid day yesterday complaining of fever, and many other leaders making their presence only at the inaugural.

While certain analysts call it a desperate attempt to resurrect the party’s failing fortunes in the state in time for the 2023 elections, others call it an effective capturing of the JD(S) fort of the Mysuru-Mandya region by the Congress.

The JD(S), which has been countering the claims of the Congress, has announced its own ‘Janata Jalayatra’ later this month. The rally, which will take off on 26 January, will collect river water from 56 locations across the state.

The ‘Ganga Ratha’, which will carry the ‘kalasha’ or pot that will hold the water collected from various rivers along with the logo of the rally, was launched two days ago by former PM H D Devegowda.

Why The Rally And Project?

The Congress rally is a prelude to the padayatra from Mekedatu to Bengaluru, to build pressure on the Bharatiya Janata Party government in Karnataka to start work on the project.

In 2019, the Karnataka government had submitted a report to the central government intimating its plan to construct a reservoir at Mekedatu.

The drinking water project entails an investment of around Rs 9,000 crore.

Tamil Nadu is against the project, claiming that huge environmental damage will be caused owing to construction of the dam — thereby affecting a large extent of reserve forests and wildlife sanctuaries in the area.