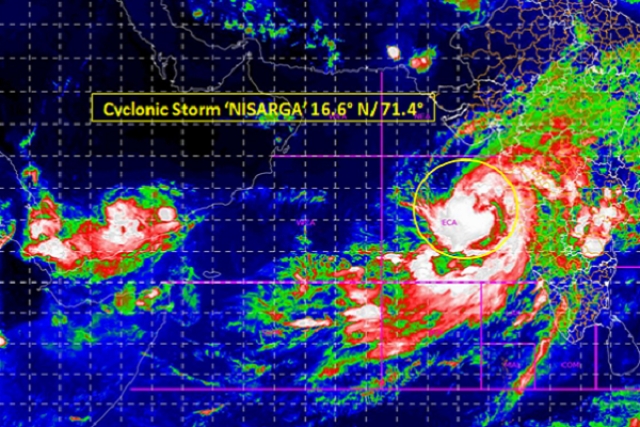 As Cyclone 'Nisarga' whirls towards Maharashtra at a steady pace, concerns have been expressed about the nuclear and chemical plants and other sensitive installations that would come in its direct path.

The cyclone is expected to make landfall late Tuesday night or early Wednesday, with all authorities in the state braced for the fallout.

Currently the Cyclone is located at around 270 km South-South West of Alibag, it is likely to gradually intensify in the next 12 hours.

Cyclone Nisarga is now moving NNE-wards and 270 km SSW of Alibag. Heavy Rainfall started over district of south coastal Maharashtra. It is likely to intensify further gradually during next 12 hrs. pic.twitter.com/LfkWtQDBUV

"Care is being taken to prevent power outages. Precautions are being taken at chemical units and nuclear power plants in Palghar and Raigad," Chief Minister Uddhav Thackeray said in an update on the cyclone.

While Palghar has the country's oldest atomic installation - the Tarapur Atomic Power Plant complex and other power units, Mumbai has the BARC setup and Raigad houses power, petroleum, chemicals and other major industries, besides the Mumbai Port Trust, the Jawaharlal Nehru Port Trust and vital installations of the Navy.

As a precautionary measure, people living in non-pucca houses are being shifted to safer locations and an estimated 2,000 slum-dwellers in low-lying areas have been asked to evacuate.

More than 60 patients were relocated from the Bandra Kurla Complex Covid-19 hospital to the Goregaon NESCO hospital during the day.

Ten National Disaster Response Force (NDRF) units have been deployed for rescue operations and six more kept in reserve. A 24x7 control room has been operationalised and the army, navy and air force and the IMD have been instructed to ensure coordination.

Mumbai Police DCP Pranaya Ashok slapped prohibitory orders preventing people at all beaches, gardens, parks and other open spaces from 3 June 1 am till noon of 4 June.

The Western Naval Command said it was geared up for emergency response during heavy rain and flooding due to the cyclone Nisarga, along with five flood rescue and three diving teams that would be in place throughout the monsoon.

Ships of the Western Fleet have been embarked with Humanitarian Assistance and Disaster Relief (HADR) material to help coastal areas that may be inundated due to heavy rains.

Around 95 personnel of Mumbai Fire Brigade have been deployed in teams across all the six major beaches in the city to carry out any rescue operations.

Earlier on Tuesday, the India Meteorological Department issued 'Red Alert' for 3 June for Mumbai, Thane, Raigad, Palghar, Nashik, Dhule, Nandurbar. It will continue on June 4 for Palghar, Dhule and Nandurbar. Alerts have also been issued for Ratnagiri and Sindhudurg districts.

The IMD Mumbai said the depression over the east-central Arabian Sea moved northwards at 11 kmph speed during early Tuesday and intensified into a deep depression around 5.30 am around 280 km west-southwest of Goa and 490 km south-southwest of Mumbai.

The storm is expected to move towards north and recurve north-northeast later to cross north Maharashtra and south Gujarat coast between Harihareshwar (Raigad) and Daman by Wednesday afternoon.

The cyclone may strain the security forces already burdened by the Covid-19 pandemic duties in the worst-hit Mumbai Metropolitan Region - most falling in the coronavirus red zone - in nearly three months now.

The IMD Mumbai has also forecast "very heavy rainfall and extremely heavy rainfall in isolated places" in Mumbai and districts of north Konkan, even as drizzles or light showers have continued to soak Mumbai, Thane, Palghar, Raigad since Monday.