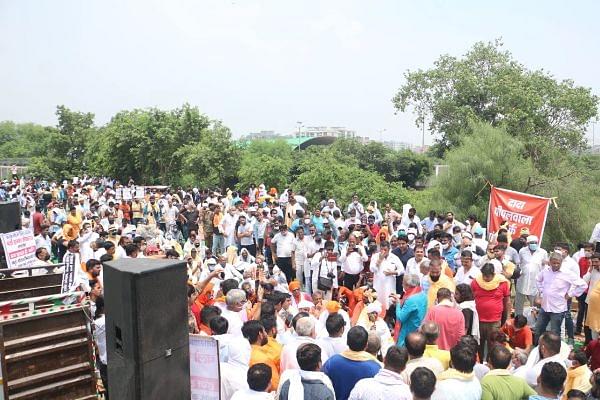 The Delhi government's proposed plan to construct a Haj House in Dwarka's sector 22 has angered the local residents, including the villagers.

The local residents are reportedly opposing the construction of the Haj house on the ground that it will disturb "brotherhood, harmony and peace".

A mahapanchayat was organised on Friday (6 August) in the area, which was attended by local residents and pradhans of many villages. The pradhans said that they would not allow a Haj house to be constructed at the spot, reports Times of India.

Many Hindu groups and leaders of the Bharatiya Janata Party also lend their support to the Dwarka residents.

On 3 August, the secretary of All Dwarka Residents Federation, B P Vaishnav, had written a a letter to the Delhi Lieutenant Governor expressing his apprehension on law and order being disturbed.

“There will be every possibility of riots, migration of Hindus and repetition of a situation like Shaheen Bagh, Jaffrabad and Kashmir,” Vaishnav wrote.

According to the report, the immediate provocation for the protest seemed to be release of funds for the project on land allotted by DDA.

“We already have a mosque in Dwarka’s sector-11. If the government wants to construct one, it should be on waqf board land. Why use public money for this? The population of Muslims is very less in the area. The mosque has only around two dozen people visiting it,” claimed president of the Federation, Ajit Swami.

“The Delhi government is trying to build its vote bank. If they want to build something, they should construct a school, hospital or park. Why are they making it for one community? Why are they wasting the taxpayers’ money like this,” Ram Kumar Solanki, pradhan of Palam village was quoted as saying.

Further, the mahapanchayat participants suggested that the government can easily expand the Haj house at the airport and should not make it in a residential locality.

Delhi BJP Chief Adesh Gupta also lend support to the villagers and said that the Haj house could be built on waqf board land or elsewhere but not at that spot.

“In 2008, the Congress government had made the plan and took the land from DDA. Now, the AAP government has decided to release funds for it. If they have so much money, why not build something for the children! Our country is behind in Olympics and they can construct a stadium,” said Rakesh Nambardar, pradhan of 28 villages.

However, Delhi state Haj Committe member Syed Shadab Hussain Rizvi Ashrafi said that it was a government project and no construction had begun on the site.

"We heard about the protest and won’t say anything that will hamper peace and harmony,” Ashrafi was quoted as saying.