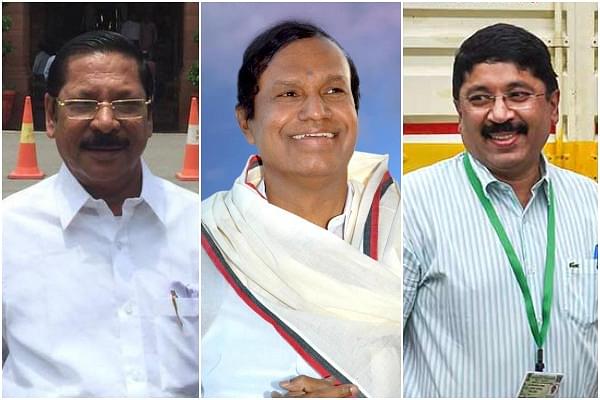 The action by Tamil Nadu police against the three MPs, stemming from two different incidents, has put the DMK on the backfoot with party president M K Stalin putting up a weak defence.

These leaders’ remarks and subsequent police action have also put other leaders such as Thol Thirumavalavan of the Viduthalai Chiruthaigal Katchi (VCK) who espouse the cause of Scheduled Cases in Tamil Nadu on the defensive.

The cases of these three MPs are a bit amusing as they invited the trouble on themselves.

In February this year, Bharathi, taking part in a party’s reading forum, attacked the media, and came down upon Scheduled Caste judges who had been appointed when the DMK was in power.

Taking on the judiciary in particular, the senior DMK leader remarked: “Not a single Harijan has become a judge in Madhya Pradesh till this day. It was Kalaignar (the late M Karunanidhi) who first made an Adi Dravida (a Scheduled Caste in Tamil Nadu), Varadharajan, a judge after he came to power.

“After that, if seven or eight from the community have become judges, it is because of the alms (pitchai) doled out by the DMK.”

The judge at the principal sessions court judge found a prima facie in Bharathi’s case and remanded him to judicial custody till 5 June.

However, the judge granted the MP interim bail until 1 June for two reasons.

One, Bharathi has moved the Madras High Court to quash the first information report filed against him.

Two, his family members, who are doctors, are involved in relief works with regard to the novel Coronavirus.

The judge said sending the MP to jail would put other inmates of the jail at risk.

The case of Baalu and Maran stems from their meeting Tamil Nadu Chief Secretary K Shanmugam and demanding a deadline for their demands to be met.

Shanmugam reportedly assured them that the problems would be addressed but would not want to give a timeframe.

On 13 May, a team of DMK MPs, led by Baalu, met the Chief Secretary to highlight the problems faced during the nation-wide lockdown to tackle the spread of Coronavirus.

They had reportedly got an update on the problems faced by the people through the party’s initiative “Come Let’s Unite” (Ondrinaivom Vaa).

After meeting the Chief Secretary, an upset Baalu and Maran came out and complained to the waiting media that Shanmugam had “ill-treated and humiliated” them.

“The Chief Secretary did not take into consideration that Dayanidhi Maran and I were Union Ministers for many years and the way he treated us was shocking. He did not accord the reception due to the Members of Parliament. His act is highly condemnable,” Baalu said.

Things could have ended fine had they stopped at this. Instead, Maran went on further and said Shanmugam had treated them as “third grade people and in a way that could not be described in words.”

“Are we people like you.. which means downtrodden (thazhthapatta aatkala)? Are we downtrodden? When MPs met him, he (Chief Secretary) did not even lower the volume of the television set in his room,” Maran alleged.

The Chief Secretary, however, denied the charges saying it was “disheartening to hear such allegations” when government officials were working day and night to overcome the situation created by spread of Coronavirus.

He denied that he had humiliated the DMK MPs and said the whole issue was raked up since Baalu asked for a timeframe for the State government to take action.

Shanmugam told the media: “I told him (Baalu) that it was not possible to give a timeframe as the government was working with minimal staff due to the lockdown. But I assured him that action will definitely be taken.”

The Bharatiya Janata Party (BJP), on the other hand, demanded that the police file a case suo motu against Baalu and Maran for their remarks.

Some of its cadres filed complaints against both the former ministers at various places across the State.

On Saturday (23 May) when police landed at the residence of Bharathi to arrest him, Baalu and Maran rushed to the Madras High Court fearing that they could also be arrested.

Justice M Nirmal Kumar, who heard their petitions, asked the government to not arrest them till 29 when their petitions will be taken up for hearing.

According to the State public prosecutor, the High Court order was with regard to the complaints filed at Thudiyalur and Variety Hall police stations in Coimbatore district. There are 10 more cases against both MPs in other parts of the State.