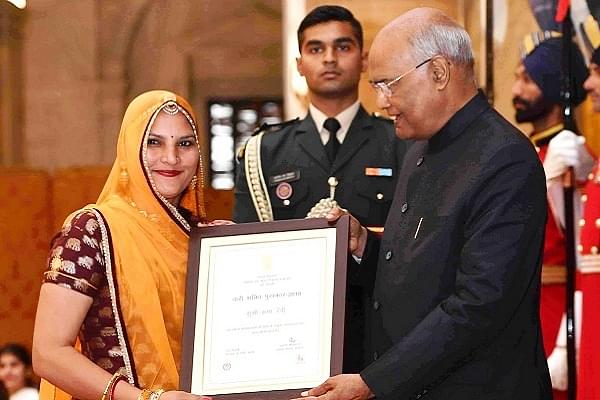 She is just an eighth pass but she has made around 22,000 women in Rajasthan self-dependent by giving them decent jobs.

She owns a client list of eminent designers from across the world who have been visiting Barmer to work with her iconic style and talent.

She has already notched the 'Designer of the year' title at Textiles Fair India 2019 and has also received Nari Shakti National Award 2018 from President Ramnath Kovind for transforming lives of thousands of women in and around her place.

She stands different from the fashion world with her talent of doing exquisite hand embroidery.

The designers who have been working with her include Anita Dongre, Bibi Russell, Abrahim Thakore, Rohit Kamra, Manish Saksena and many esteemed designers from the US as well.

Amitabh Bachchan on KBC has recently hosted her on the hot seat and that is how her story is now known to the world.

We are talking of Ruma Devi from Barmer in Rajasthan, a fashionista who emerged from the rustic rural lanes of Rajasthan. In just a few years, she has scripted a success story of her own by carving a path which has all the angles of a Bollywood script.

Born in a financially weak family, she lost her mother when she was just five. Her father re-married and then started her real struggle. Her family members got her name dropped from school when she reached class VIII and engaged her in household chores.

Each day, she had to travel around 10 km to fetch water. At 17, she was married where her struggle did not end. Poverty continued to chase her and when fed up, she formed a group of around 10 women and collected Rs 100 each to purchase raw material to make bags with hand embroidery on it.

"We went to sell them in our village and got a strong feedback. Then we spread our work with more groups and went to sell them in nearby villages too. Again the result was fabulous," she says adding "My grandmother taught me this embroidery and I just wished to make it big."

Grameen Vikaas and Chetna Sansthan in Barmer came to know of her work and praised it and in 2008 she became its member. In 2010, she became the president of this organisation.

"We then started participating in exhibitions and showcasing our work which helped us attain an identity," says Ruma in a candid conversation with IANS on the sidelines of Woman Up! Summit being organised in Jaipur.

"Now, we have around 22,000 women working with us from different age groups of 17 to 70. The elderly women who were ill treated by their children are also working with us and earning their livelihood by standing on their own. Also the girls who are working with us have started dreaming big, though in a veiled world."

"Earlier, when I started working, there were strict restrictions in our family to go out and work. However, I had to fight with my family to come out, although in veil. Then, we females started working in big 'ghoonghat'. However, as and when the work spread, our family started accepting us without 'ghoonghat' but with our heads covered with our 'dupatta'. Many mistakes were happening when we were doing embroidery under 'ghoonghat'. So we decided to keep 'pallu' on our head. Now, we are working with a veil on our head."

"Even in 50 degree temperatures, we work earnestly making earnest designs via embroidery. We also trudge several kilometres to fetch water and do our household chores. At times there are challenges during the dyeing process.

The women who stitch the dreams of many are scattered across a vast area across the desert land, forcing Ruma Devi and her workers to travel vast lengths on foot to supply the raw material.

"Meanwhile, now, we have decided to bring our own brand. Presently, we have stopped working with big brands. They take our money and credit too while artisans who work on it get nothing in return. Now, when we'll roll out our own brand, we will have artisans' story to go along with our produce. That shall motivate our women to work harder," she says.

Answering a query on what made her work different from other designers, she says, "We were innovative and we experimented with everything. We have had our work on saree, cushion, dupatta, Kurti and many more. We also used different materials like tussel silk, cotton and many more which no one has ever used.

"This work took us to other level. World renowned fashion designers have been visiting us in Barmer to brief us of their needs and we have been good in serving them," she says.

Ruma has a son of seven years. "My family takes care of him. At times, he gets annoyed for I can't give him decent time, but I teach him that hard work is a must to survive and he smiles. I think he is learning the art," says Ruma.

For being awarded in TFI, she has an offer to visit Paris to learn the best from the world's most fashion friendly city, however, this designer of rural rustic lanes has no time to visit Paris.

"They want me to learn newer perspectives of fashion from Paris, however, I am still learning new design equations from my own land. However, I am not rigid and shall go as and when time allows. Presently, I am really tied up with my tight travelling schedule," she says.