'Do Not Regret My Decision': US President Joe Biden Over US Forces Withdrawal From Afghanistan 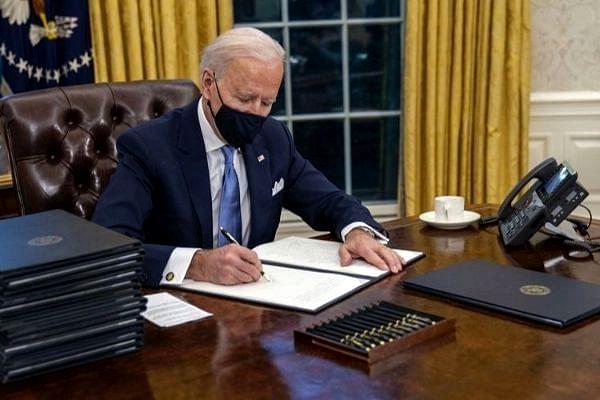 US President Joe Biden on Tuesday (10 August) stated that he does not regret his decision to withdraw American forces from Afghanistan, reports Mint.

Biden has urged Afghanistan's leaders to unite and "fight for their nation" against the Taliban terrorists. The statement comes amid the Taliban offensive which till now has captured eight provinces.

Speaking to White House reporters, Biden said, "Afghan leaders have to come together......They've got to fight for themselves."

He said the US was keeping the commitments it had made to Afghanistan, such as providing close air support, paying military salaries and supplying Afghan forces with food and equipment.

"We spent over a trillion dollars over 20 years. We trained and equipped with modern equipment over 300,000 Afghan forces. And Afghan leaders have to come together. They've got to fight for themselves, fight for their nation," Xinhua quoted Biden as saying.

"I think they're beginning to realize they've got to come together politically at the top, and we're going to keep our commitment. But I do not regret my decision," he added.

The US will continue to provide Afghan forces with close air support, food, equipment, salaries and make sure the Afghan air force is operable, said Biden.

"But they've got to want to fight. They have outnumbered the Taliban."

Notably, the full departure of US troops is expected to be completed by month's end. The US Central Command said that over 95 per cent of the drawdown had been completed.

Last Monday, Afghan President Mohammad Ashraf Ghani said in his remarks to the parliament that Kabul had a six-month security plan to change the situation in the battleground. Meanwhile, he blamed the withdrawal of US troops for the worsening situation.

The Taliban on Tuesday claimed that it had seized Farah city, capital of Afghanistan's western Farah province, marking the seventh provincial capital to fall to the group in less than a week.

State Department spokesperson Ned Price said earlier in the day that the security situation in Afghanistan is of grave concern to the US, Xinhua reported.

The US carried out airstrikes against the Taliban in recent days as the insurgent group made rapid military advances across the country.

Violence has escalated across the country now that US-led forces have all but withdrawn following 20 years of military operations.

The Taliban have taken at least eight of the country's 34 provincial capitals, and are threatening more.

More than 1,000 civilians have been killed amid fierce fighting between the Taliban and government forces in the past month, according to the UN. Its children's agency Unicef warned this week that atrocities being committed against children were growing "higher by the day".

Officials said the insurgents had raised their flag in the main square and on the governor's office in Pul-e-Khumri, the capital of Baghlan province, which is located about 200 km from Kabul.

As the fighting rages, thousands of people have been fleeing their homes.

Other gains by the Taliban this week include the key northern city of Kunduz. It is considered a gateway to mineral-rich provinces and is in a strategically important location close to the border with Tajikistan, which is used for the smuggling of opium and heroin.

Heavy fighting is continuing in other parts of the country, and US and Afghan planes have been carrying out airstrikes.

"We saw bodies lying near the prison... there were dogs next to them," said one woman who left Kunduz as the Taliban took control.

Residents still in the city said shops had begun to reopen as Taliban militants focused their attention on government forces who had retreated to the airport.

"People are opening their shops and businesses, but you can still see fear in their eyes," one said.

The Taliban have rejected international calls for a ceasefire.

UK Chief of the Defence Staff Gen Sir Nick Carter told the BBC that if the state fractured, the "ideal conditions" could emerge for international terrorism and violent extremism.