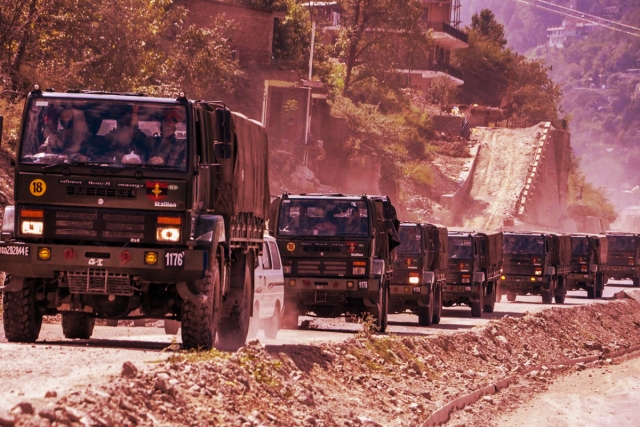 The ongoing military confrontation between India and China, in the Himalayas for over the past six months, has cast its shadow on three roads — Rishikesh to Gangotri (231 km), Rishikesh to Mana (281 km) and Tanakpur to Pithoragarh (162 km) — which lead up to the northern border with China.

The Ministry of Defence has emphasized that these roads, terming them as feeder roads, falling under Chardham Pariyojana, are strategically important for the security and should be at least double lane.

Uttarakhand shares 345 km of border with China. The terrain along the border is high-altitude and is snow bound region. The Indian armed forces have establishments located along the Nelong Axis, Mana Pass, Rimkhim Pass, Niti Pass and Lipulekh Pass, which are all along the Indo-China border.

The Centre has underlined that it is essential that three feeder roads which are being constructed by Border Roads Organization should be double laned, having width of 7m or 7.5 m if there is a raised kerb.

The Centre, through an application in the Supreme Court, said the Army has been using these roads post the war with China in 1962.

Initially, the need was to ensure connectivity to the border areas for troops and hence single roads were constructed for connectivity. But in the backdrop, where armies of India and China are settling in for the long haul in the eastern Ladakh, which is considered a tangled territorial dispute, the Centre has stressed for wider roads with double lane configuration. This will enable faster mobilization of troops, guns and specialist weapon systems to the border points on the Indo-China border.

The Centre said the roads from Joshimath to Mana and the road from Rishikesh to Gangotri, being feeder routes to the strategically important border areas on the Indo-China border, are included in the Long Term Roll on Works Plan (LTRoWP) 2018-19 to 2022-23 of the Border Roads Organization and have to be upgraded, as per operational requirement of the Ministry of Defence, to National Highway Double Lane (NHDL) specifications.

The Centre stressed a double lane road having a carriageway width of 7 m is necessary to meet the requirements of the Army, but it says, September 8 order passed by the top court may lead to serious repercussions on the defence and security interests, as the width of roads connecting to the border areas cannot exceed 5.5m.

The entirety of the road from Rishikesh to Niapani/Thagla Pass which goes through Rudraprayag and Joshimath, and the road from Tanakpur to Lipulekh Pass which is on the Indo-Chinese border have to be sufficient width to allow bi-directional movement of army trucks carrying troops, weapons and artillery heavy equipment.

The Centre has urged the top court to modify its order, as narrow roads hold up vehicles, including army vehicles, that are coming from the opposite direction for a period of even up to 6 hours to allow an army convoy to pass. “For speedy mobilization, the roads must be wide enough to have sufficient space for two vehicles to cross each other and not go off the road and be bogged down on the untarred shouldered off the road”, said the application by defence ministry.

In the backdrop of these circumstances, Centre has told the top court that the circulars issued by Ministry of Road Transport and Highways (MoRTH) dated October 5, 2012 and March 23, 2018, do not deal with roads which are essential for the movement of troops, armaments, artillery and tanks to the borders of the country to defend the nation against aggression and hence cannot be treated as covering the particular situation which the state is facing today.

The application says prior to the September 8 order, upgradation works for double laning of the three feeder roads was going on, and hill cutting of 12m formation was being done to accommodate the double lane of 7m width.

On December 2, the Supreme Court asked the High Powered Committee (HPC) set up by it to consider the applications filed before the court by the Ministry of Defence. Solicitor General Tushar Mehta, representing the Centre, had contended that it was only a minority view of the HPC that the 2018 circular be complied with. The top court had asked the HPC to share a detailed report within a week after the meeting, and for the MoD and the MoRTH to comment on it.