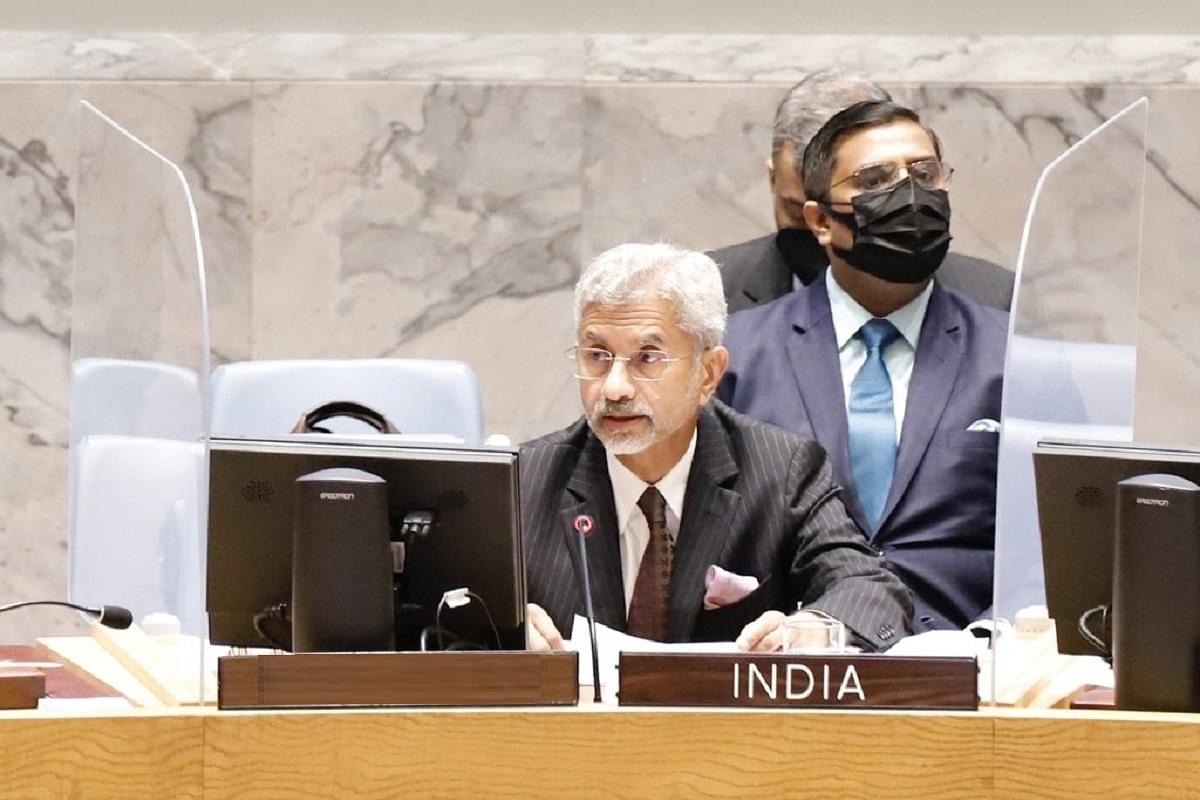 EAM S Jaishankar at the UNSC meet (Pic Via Twitter)

External Affairs Minister S Jaishankar on Sunday met with the Indian Jewish community in Israel and hailed their manifold contribution to the ties between the two countries.

Jaishankar, who arrived here earlier in the day, said he was confident that the Indian Jewish community in Israel will bring the two countries even closer together in the coming years.

"This is my third visit to Israel in the last four years. But every time I return, I leave with the sense of an unfinished journey. Like India, this too is a place that requires a lifetime to discover and understand. I am, therefore, happy to be back here, in a land with which we have centuries old ties, and amidst you who are the umbilical cord nourishing these ties", Jaishankar said addressing the Indian Jewish community in Israel and a gathering of Indologists.

Jaishankar sentiments previously echoed by Prime Minister Narendra Modi that India's relationship with its Jewish diaspora community in Israel is one of "mutual trust and friendship".

The Jewish diaspora in India remains unique because "like other communities it coexisted peacefully in India for hundreds of years but maintained its Jewish identity despite a long isolation from other Jewish communities", the minister said.

"And, two, you chose to begin a new life here mainly for civilizational reasons. And it is rare in Jewish history that you have had a long, continuous period where you thrived in freedom and equality, as you did in India", he stressed.

Citing ancient connections between the two civilizations -- both cultural and religious, Jaishankar applauded the contribution of Indian Jews in the nation building process of India, describing them as "one of us".

The central text of Rabbinic Judaism, Talmud, mentions trade with India in ginger and iron. Another foremost religious text, The Book of Esther, mentions India as Hodu.

"You have contributed to the building of India. We often go around Mumbai and Pune not realising that many landmarks were your contributions, like the Sassoon Docks in Mumbai and the Sassoon Hospital in Pune. David Sassoon was, in fact, one of the founders of the Bank of India.

"Some of you were by the side of Mahatma Gandhi during our freedom struggle. In 1916, one of the lawyers in the team defending one of our major nationalist leaders, Bal Gangadhar Tilak, was a Jew, David Erulkar", Jaishankar said.

"Some of you contributed as educators and some as medical doctors, like Dr Jerusha Jhirad who was awarded one of our highest civilian awards, the Padma Shri. Some of you served as administrators and some distinguished themselves in our judiciary, such as David Reuben who served as the Chief Justice of one of our High Courts. There were three among you who became Mayors of Bombay. And there were another three who are remembered for their military service; Vice Admiral J R Samson, Maj Gen B A Samson, and Lt Gen J F R Jacob whose uniform hangs at the Latrun Museum here," he said.

Jaishankar went on to to highlight the community's contributions in enriching India's literature and arts with the likes of Nissim Ezekiel who was honoured with the Sahitya Akademi award.

"People of my generation grew up in India waking up to the signature tune of the All India Radio that had been composed by a Jewish exiled in India, Walter Kauffman. And how can you be in India and remain untouched by Bollywood and cricket! You have been part of our film industry and one of you, Judah Reuben, officiated as cricket umpire in many of India’s test matches", he reminisced.

The continuity of age-old Indian practices by the Jewish community received particular appreciation from the minister, which he saw as creating "the organic bond between our two peoples".

"What is equally important and interesting is that not only have you, again inevitably, carried some flavours of India with you here, but also that you have retained, or assimilated in some form, some Indian traditions in a manner that is unique to you," Jaishankar said.

In culinary, the minister pointed out the 'Malida thali' made by the Bene Israelis (Indian Jews from the Maharashtra region). He spoke on the influence of the 'mangalsutra' and 'mehendi', the practice of 'baat pukka' for formalising marriages among Baghdadi Jews, and symbolic adorning of the Torah arks with jasmine garlands and the use of 'manara' by the Cochini Jews as some such examples.

"You also adopted that very Indian tradition of removing shoes before entering the synagogue. You still remember our way of life, our languages, and our festivals. I am told about the Maiboli journal in Marathi. And I recently saw pictures of many of you celebrating Onam with a 'saadya' meal, not to forget the flower rangoli. You celebrate both Holi and Purim, and both Diwali and Hanukkah", he further added.

"It is, therefore, not at all surprising that so many of you say (that) Israel is my fatherland and India my motherland,” Jaishankar emphasised.

Addressing Indologists, the minister said that "we owe a debt of gratitude for their love and affection for India" which has helped strengthen ties between the two countries.

"You serve to both widen and deepen the discourse between one holy land and another. There are, among you, those who have delved deep into Dravidian languages and literature, translated classical Sanskrit texts into Hebrew, devoted themselves to the study of Hindi literature, and even ventured into comparative studies of the two religions", he noted.

The minister mentioned India's historic connection with Jerusalem going back to Sufi Saint baba Farid meditating in a cave inside the city walls around 1200 CE, the role of Indian soldiers in the region during World War I and how some of these soldiers also ensured the safety of the spiritual leader of the Baha’i Faith in Israel at that time.

"In modern post-Independence times, there's also this relatively less known aspect of how major socialist political leaders and streams in India felt a kinship with the kibbutz movement in Israel, in a quest to build on the Gandhian concept of ashram or village as a self-sustaining unit of development", he noted.

Bringing out some of the lesser known connections between people of the two countries, he shared that "Jayaprakash Narayan, one of our most prominent political leaders and theorists associated with our Independence struggle, visited Israel in 1958, and many followers of Vinoba Bhave, another towering leader of our independence movement, visited Israel in 1960 to understand the kibbutz movement better".

The strong connection, he said, also brings the urgent need to tap both the community and the Indologists here to better document the heritage and history of the community, as also the societal crossflows.

"How do we preserve the memory and experiences of the community elders? How do we listen to the younger generation of the community, understand their aspirations and make them a part of our living bridge? How do we enhance the reach of the work being done by the Indologists both within the community and outside?", he asked.

We would be happy to hear from you and support endeavours in this direction. I am told that the Embassy has already offered to devote a corner in its Cultural Center to house the work being done by you so that it is both available and accessible in one place, he noted.

Sapir, an India born scholar, was a Professor at the prestigious Hebrew University of Jerusalem.

The book outlines the excellent way to discover the city's old Colonial architectural gems and to enjoy a glimpse of the glory of the city in the days of the British Raj.

During his visit, the minister would call on President Isaac Herzog, Prime Minister Naftali Bennett and Foreign Minister Yair Lapid.

He will also be holding talks with leading academics from all over Israel, business community leaders and interacting with the Indian Jewish community.

Jaishankar will also be visiting places of historical significance to India, demonstrating its long-term presence in the region and constructive role played in shaping the history of the region.

India and Israel elevated bilateral relations to a strategic partnership during the historic visit of Prime Minister Narendra Modi to Israel in July 2017.

Since then, the relationship between the two countries has focused on expanding knowledge-based partnership, which includes collaboration in innovation and research, including boosting the 'Make in India' initiative, the Ministry of External Affairs said in a statement ahead of his departure.