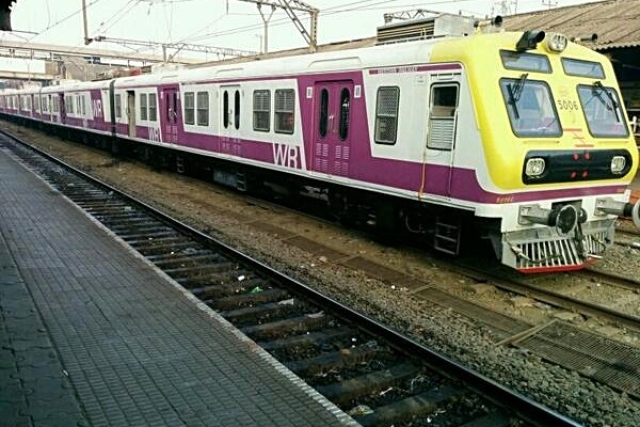 A local operated by Western Railways in Mumbai (pic via Twitter)

This high-dependence on suburban train network though has come at a cost. As per reports, while a single 12-coach train has an official capacity of 1,174 passengers, the actual number of commuters per train is around 6,000. This translates to local trains on an average being loaded 400 per cent above capacity.

This overcrowding - infamous on Virar, Karjat routes, also resulted in 711 deaths in 2018, as a result of passengers falling off overcrowded trains. The rail network also bore witness to the 2017 Elphinstone Road tragedy, when 23 people died in a rail foot over bridge stampede.

Over the years, many have called for an upgrade of the suburban rail infra and hope is on the horizon as Shanghai-based New Development Bank (NDB), which funds projects for BRICS nations has sanctioned $500 million for Mumbai Urban Transport Project-3A.

What Is The Mumbai Urban Transport Project-3A

The NDB part of the project seeks to ramp up the AC local train network in a big way along with setting up car sheds, laying new lines and upgrading 19 suburban rail stations. This project is being executed by Mumbai Railway Vikas Corporation (MRVC).

As per estimates, the total project is expected to cost around Rs 54,000 crore and the department of economic affairs (DEA) has set a limit of $500 million funding per financial institution for the project.

Besides the NDB, the World Bank and Asian Development Bank (ADB) too have shown interest in funding the project.

The NDB funds will be used to procure 191 AC rakes, laying of new tracks for Central and Western lines and construction of dedicated car sheds for the AC locals at Vangaon and Bhivpuri. These car sheds with maintenance facilities will come up on 30 hectares of land.

Additionally, the project will extend the current CST-Goregaon Harbour line to Borivali. This will need additional track laying for 7 KMs, costing around Rs 826 crore.

The Borivali-Virar stretch will get two additional tracks for long-distant trains, thus ensuring more room for the suburban rail network which currently has to share capacity with the express trains. This will cost around Rs 2,814 crore.

On the central line, two new tracks will be built on the Kalyan-Badlapur segment at an estimated cost of Rs 1,510 crore and one line will be constructed on the Kalyan-Asangaon route costing around Rs 1,759 crore.

Additionally, the project includes a CST-Panvel high-speed corridor and a Panvel-Virar corridor. The World Bank has expressed interest in funding these two corridors.

The project will also help usher in a new communications based train control (CBTC) signalling system at the cost of Rs 5,928 crore. This will potentially help the railway authorities increase the daily local running capacity from 3,000 to 4,500, by allowing trains to operate at a 2 minute interval.

Under this technology, signalling poles will be rendered redundant as signalling system will be installed in the motorman’s cabin, supplying them information like distance between consecutive trains helping them adjust the speed accordingly.

With Mumbai’s population expected to rise to 27 million by 2035 - from around 20 million currently, the city needs additional reinforcements to meet the rising demand for public transport.

Mumbai Metro is expected to play a key role in fulfilling this demand. The Mumbai Metropolitan Region Development Authority (MMRDA) seeks to add at least 140 km of additional, new metro lines before 2021.

Additionally, MMRDA has confirmed that the first trial run on two Metro corridors - Metro 7 that connecting Andheri East to Dahisar East, and Metro 2A that connects D N Nagar to Dahisar - will begin in the first week of September 2020.

A political spectre though looms on the Mumbai Metro Line 3 as soon after swearing in as Chief Minister, Uddhav Thackeray had put a construction embargo on the Aarey car shed - a critical component of the project.