Explained: What Exactly Happened At Periyar’s 1971 Salem Event That Rajinikanth Referred To 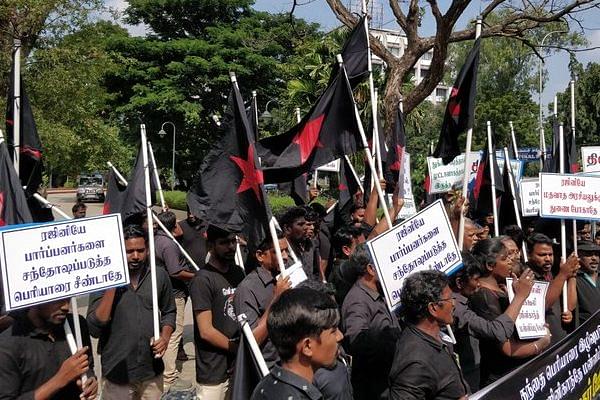 Dravidar Viduthalai Kazhagam protesting against Rajinikanth for his comments on Periyar (Source: @Ahmedshabbir/Twitter)

In his speech made at Thuglak magazine’s 50th-anniversary event on 14 January (Tuesday), Rajinikanth said that the magazine, edited by Cho Ramaswamy, was the only one to cover the aforementioned 1971 event in which Hindu Gods “Ram and Sita’s effigies without clothes were paraded, garlanded with footwear”.

Rajinikanth also said that despite the attempts of the then DMK government, headed by Karunanidhi, seizing the copies of that issue of Thuglak, a few copies did manage to reach the market.

After Rajinikanth’s remarks, many Dravidian party leaders refused that any such incident had occurred and demanded an apology from the superstar. A complaint has been filed against him, and reportedly, his effigies were burnt by Dravidian outfits.

However, the superstar refused to apologise, and said that his comment was factual.

Rajinikanth’s another comment might have piqued the Dravidian party leaders. He said, “If someone had 'Murasoli' (DMK’s official organ) in his hand he will be known as DMK man. But if someone had 'Thuglak' he would be known as an intellectual.”

What is the 1971 event Rajinikanth referred to?

The event Rajinikanth referred to was a ‘superstition eradication conference’ organised by Periyar in 1971 in Salem.

In an article titled ‘Demonstration against obscene tableaux’, The Hindu on January 25, 1971 reported:

“The tableaux included obscene pictures of the birth of Lord Murugan, penance of sages and Mohini Avatara, a 10-foot long image of Lord Rama was carried on a vehicle and dozens of people kept beating it with chappals”.

In another 31 January 1971 report, The Hindu quoted Karunanidhi himself saying that he was sorry that such obscenity had taken place:

“[Karunanidhi] told journalists in Madurai that Periyar had the right to think on revolutionary lines, but no government would be prepared to implement all his revolutionary ideas.. he said he was sorry to learn from newspaper reports about the obscene tableaux in the DK-sponsored procession and the police permitting the procession. The feelings of some people would have been hurt and he could quite understand it.”

An Outlook report also describes the attempts of the Karunanidhi-led government to curb the news of what had happened at the conference reaching the masses:

“.. in February 1971 when Thuglak, edited by Cho Ramaswamy, came under fire for ­publishing photographs of a Dravidar Kaz­hagam’s procession in Salem that had depicted Hindu gods Rama and Sita in the nude with a garland of slippers around their neck”

“Karunanidhi had initially denied that any such denigration had happened at Salem, but Thuglak countered his claim with photographic evidence. Even as the police came to the Ananda Vikatan press to seize the copies, bundles of the fortnightly were flung over the compound wall and found their way to the market, where they were sold at a premium”

“The irrepressible Cho published a cartoon in the next edition that showed Karunanidhi as the circulation-cum-advertising agent for Thuglak for having created a demand for his fledgling magazine.

Based on the above, it is quite clear that the event with obscene depiction of Hindu deities, including “Hindu gods Rama and Sita in the nude with a garland of slippers around their neck” was indeed organised by Periyar in 1971 in Salem.

An EPW March 1991 report also referred to the happenings at the Salem conference as “nothing unusual.. as it was a part of the tradition of the DK politics”.

It also stated that the Democratic Front (Congress (O) and allies) at the time stridently utilised this in 1971 election campaign, and that the Dravidian party had to go into a damage-control mode.